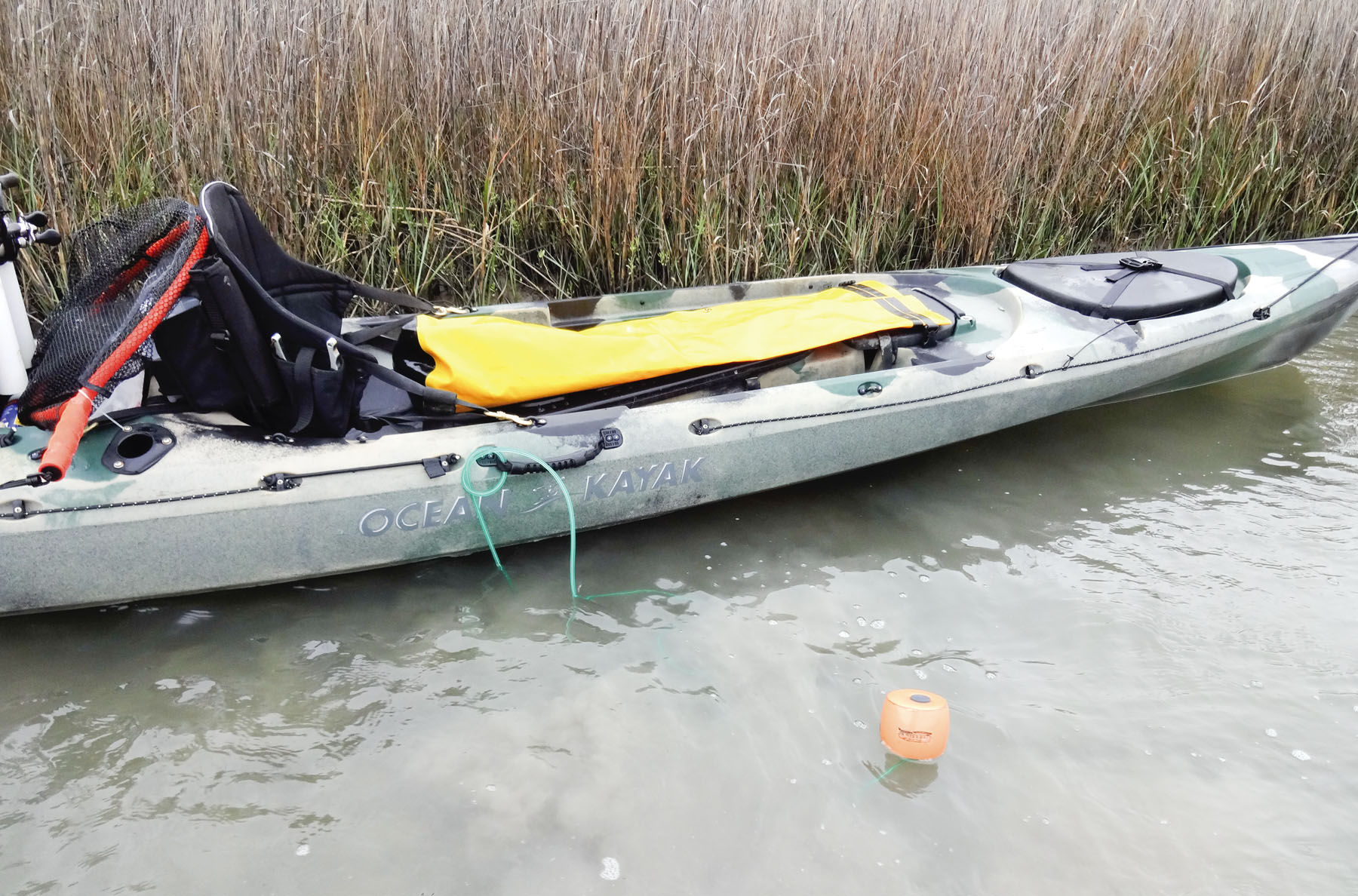 Cliff’s fish bag and stringer system provides an option to coolers and towing fish behind the kayak.
I have a big fish story for you, kayak style. The difference between this one and many others is that mine is true. (I know you've heard that line before.)

It was a mild late-winter day. Forecasts were for a fairly strong NE wind to start the day, but had it calming down midday as the skies were supposed to turn sunny. Cliff and I launched our kayaks at around 5:30 AM. We had about a three mile paddle to reach our destination.

Approaching the area we had our sights on, we double checked the wind direction to best position ourselves for a drift over a mud/shell mix bottom with depths averaging two-and-a-half feet. Cliff and I both worked soft plastics through the just slightly murky water.

It didn't take long until we started seeing action. My first fish was a decent speck while Cliff wrangled in a nice slot red. The drift covered probably 400 yards before we decided to paddle back and do it again.

Here is where the big fish story begins...

We repeated the same drift several times. Not long into one of the later drifts I witnessed Cliff hook up on a fish. About 80 yards away I just kept on with my fishing effort and casted a few more times, not thinking anything more than Cliff just having another average fish. After a few casts I turned back his direction and witnessed him still fighting the fish, rod doubled over and all. I jokingly yelled over to him to hurry up already.

Cliff remained silent. I cast two or three more times and again turned to see him still fighting that same fish. At this point I decided that perhaps he had on a more than average fish and decided to shoot some action shots of him landing it.

I paddled to within twenty yards and got out my SLR digital camera and began clicking off pictures. First the photos were just of Cliff in the heat of battle with the bent rod and fish still under the water. The photos transitioned into the fish surfacing and giving a few thrashes of its whale-sized tail, then to Cliff netting the behemoth, and finally to well posed shots at various angles with the fish.

To clarify a bit, it's not as if this is some world record fish, but when you catch a run of mid-slot reds and then suddenly have a redfish that is easily 35 inches take your lure, it's a bit of a different situation, a notable moment at the least.

Our last moment with the fish was capped off with Cliff insisting that I feel the weight of this monster. I paddled up next to him and foolishly thumbed its bottom lip thinking, "I can one-hand it, no problem." WRONG!

As soon as Cliff removed his hand from the fish's stomach, it immediately fell from my grip and splashed into the water. Just like that the beast was gone and I was left with bleeding tooth marks on my thumb. I apologized to Cliff for the less than ideal release of his fish but also congratulated him on a nice catch. We regrouped and proceeded to fish on a few more hours, landing a number more reds and trout.

To wind the day up I wanted to get some good photos of the last couple of fish that we caught. After first catching the fish we picked a good spot for pics. I pulled out my camera and as any careful photographer would do, I checked the metering and other settings to insure the pictures came out decent.

"Oh no..." I thought. My heart instantly sank as I realized I had not done this in the heat of the moment with Cliff and his big red and I immediately went back to look at the photos. To my dismay I discovered all of them were totally whited-out from overexposure. I had left the shutter speed on a setting from a previous shoot of some low-light whitetails I was photographing and in the middle of the sunny day on the water, the pictures came out completely white. I scrolled through picture after picture, hoping that at least one would give some glimpse of the fish, to no avail.

About this time, with my heart sunk, Cliff happens to ask how the big fish photos turned out. With a blank face I gave him the look of a lost puppy and subtly shook my head. Then I had to explain to him what y'all are reading now.

Now the tale of the big red will go down as one of legend. "I swear he was this big!" (Arms stretched wide for effect.)

What a memorable day Cliff and I had on the water. Cliff's fish is not the biggest red I have ever seen but certainly one of the biggest I have witnessed being landed from a kayak. As I type this my heart hurts thinking about the misstep in my photography. I was so excited about the action shots and awesome poses with the monster that I failed to pay attention to the details. I believe however (or at least have justified to myself) that its days and stories like this that cement some of the most fond memories into our catalog of fish tales. I hate that I missed the photo-op on a hog, but all the more reason to go back out and do it again!

Hello Bob - Great question! Personally, I prefer keeping them in a cooler. I have a slender cooler that is perfect for holding fish up to about 24 inches. If you prefer stringing them, I wouldn't be too worried about sharks when bay or marsh fishing. In my opinion, the downside to the stringer is when paddling to a new location and having the drag of the fish slowing you down. Of course you could throw the fish into the rear cargo area, however, they are susceptible to flopping around and potentially making a mess of your gear.

My buddy Cliff deserves credit for a third option, and that is using a dry bag. When Cliff decides to keep a fish or two for dinner he strings them but puts them in a medium sized dry bag which he then places into the hull of his yak through the center hatch while back underway. You can see a picture of his dry bag lying across the kayak, as well as a stringer float in the water next to the kayak.

Thanks for your question and photo. Good luck on the water!

Reader comments and questions are always welcome via telephone and email. Cade