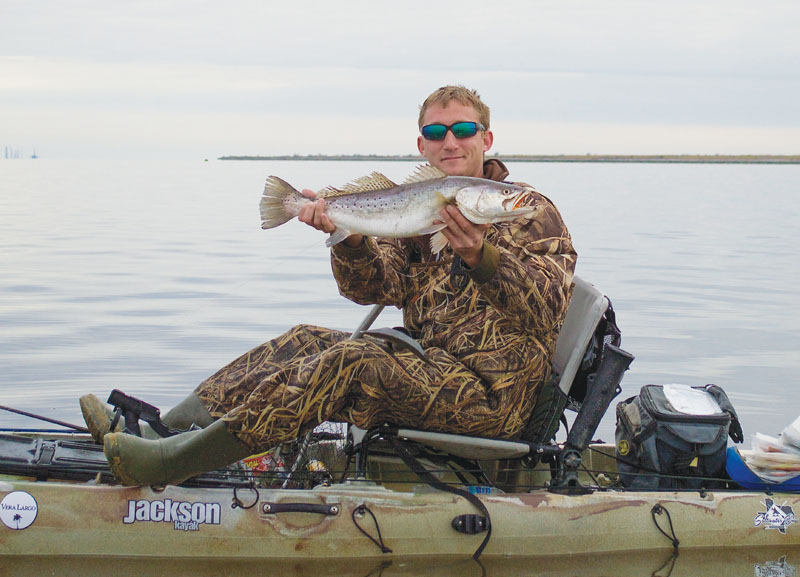 Throughout the years I have spent countless hours on the water studying when-where-why I catch fish. As far as doing my homework, I would venture to say that a majority of my knowledge has come from trial and error and putting in time on the lake. The best way to acquire knowledge of a subject is through hands-on experience; there is not a better teacher than you learning from your own mistakes.

Years ago, the allure of wintertime trout fishing always captured my attention but I had no idea where to begin in this expedition. I started reading articles, forums and any information I could find on the internet regarding wintertime tactics. After getting a basic plan together, my next move was to put some hours in on the water. After a few failed winters, I finally put all of my knowledge together of what not to do; it was a learning process but eventually I got it down. Since then I have had several successful trips but those are not the times that stand out. There are a few moments of failures and follies that still linger in my mind and haunt me today.

The first winter that I attempted to fish was brutal. For one, the pair of waders I owned were thin and cheap and had a hole around the left knee. After a few hours of shivering in the water I would always cut my trip short and head home with nothing but numb, wet feet and hands. I only made about three trips that year and every one of them seemed to be in the upper 30s, overcast and cold! At the end of that winter I became discouraged but knew that it took a determined angler for cold weather fishing.

Leading up to the following December, I planned ahead and geared up for when the time got right. I had new waders, lures and a few other locations to try out. I swapped my familiar leadheads and soft plastics for a lure that was new to me, a Corky. The only thing I knew about this lure was that it worked for lots of fishermen and to work it slow for best results. I probably made 1000 casts that year followed by various slow retrieve methods with only one bite to show for the effort. On the bright side though, that one bite was one more than the previous year and that is progress!

The next winter, three years ago and two days after Christmas, I decided to make another attempt at it. It was a Sunday and all the family that was in town already headed home, so I had no obligations for that day. I remember it being low- to mid-40s but the sun was shining and Sabine Lake was glass. I started working a She Dog across a flat and never found any action with it. After spending a half day on the water with no luck, I was ready to call it quits.

Not long after my decision I noticed a group of mullet scatter frantically a good distance away. I made a quick but quiet paddle to the vicinity of where I had seen the mullet jump. I chunked a purple and chartreuse Corky in the general direction and, seconds later, a fish slammed my lure like I had never felt before! She came up shaking her head with a big purple Corky attached to her lip. After I got her in and settled down, she measured 27" and I quickly released her. I sat there until dark with the lake to myself catching trout every second or third cast. The smallest was 22" and I caught my personal best that daya 29.5" specimen measured on my Bending Branches paddle and just shy of the 9.0 pounds on the Boga Grip. Finally! My time and effort on the water was paying off. At that instant I realized why anglers brave the elements during the winter months.

Now, fast-forward to December last year. It was a week before Christmas when I decided I was going to make my first attempt of the year at finding a big trout. I loaded up my kayak, waders, jacket and my rods and headed to the lake. Accompanying my rod was a big purple Corky and we were ready for the hunt. I made my way across a flat covering a large area of water and it was slow. I made several unproductive casts and for a while I thought that I may have been a little early for the Corky bite. My phone rang and it was my buddy, Josh. I would not normally answer but fishing was slow and I knew there had to be a good reason for him to call.

Before answering, I made a lengthy cast and then attempted a one-handed retrieve of the Corky while holding a conversation. Needless to say, with only one hand it took me around 5 minutes to get in. After I hung up, I twitched my Corky one last time and watched it rise to the surface. Maybe a rod's length away there came a bright silver flash. Before I could react, I knew this was the fish I had been searching for since my last trophy. I set the hook and my line instantly snapped. She just sat there, feet in front of me, trying to shake my lure and there I am with no control whatsoever over her. Out of spite, she came up again vigorously shaking that purple Corky right beside me before disappearing into the murky waters of Sabine Lake.

I knew after losing that trout, more than likely she was going to be my biggest fish of the year. I only got to see her for a few short seconds but that was long enough to leave a lasting memory. When I am swapping fishing stories that fish always gets brought up in conversation. That fish and the long days of me shivering and begging for just one bite. The bad days are seemingly never forgotten and neither are the ones that got away. Now that December is here, I am getting prepared once again for winter. A great lesson and a good reminder of what is yet to come and better days ahead!