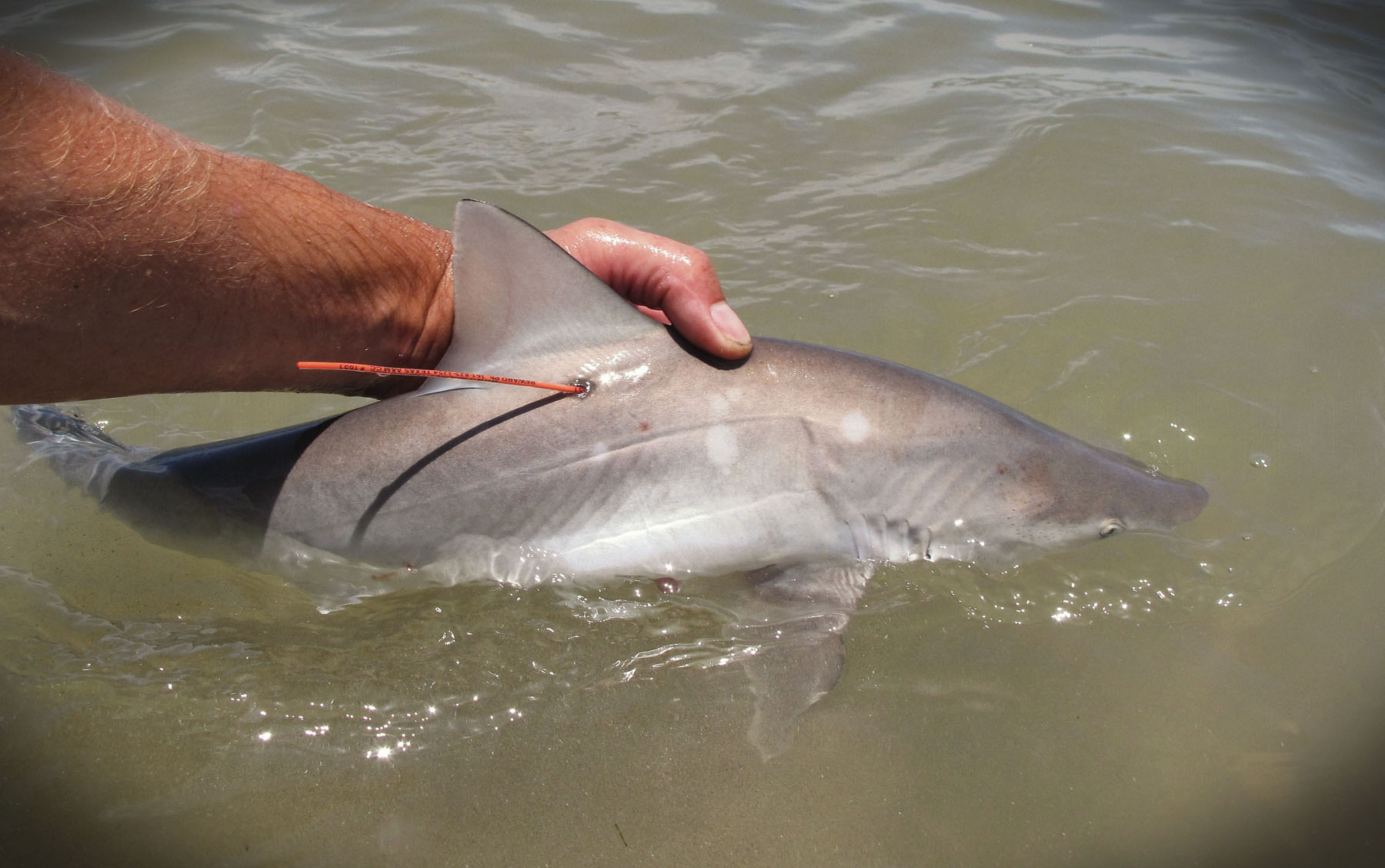 Sharks of all sizes are tagged for the rodeo.
Competition is said to be the essence of human nature and those who achieve dominance will bask in glory. When competition is brought into the mix of a unique genre such as fishing, anything is possible. Through the decades, countless fishing tournaments have been established worldwide to provide a competitive sporting factor. Of these events, some were overshadowed by greed while others contributed beneficially to the sport. In some cases fishing tournaments are seen to create an uneven playing field, due to either local knowledge or some other advantage. The beauty of shark fishing though is the reality that virtually any predator of any size could unexpectedly succumb to the temptation of your bait therefore resulting in an incredible catch for even Joe Average.

In 2002, an early-era internet-based fishing tournament was created that focused on land-based shark fishing in Texas. This unique online event was the Texas Shark Rodeo. There was no entry-fee and no associated BS in this honor-system based tournament. In essence, this was truly a friendly competition that would spoof bragging rights throughout the year. There would be required submission data with the intention to be utilized for research purposes. This creative collaboration of an event was due to two men "Big Lou" McEachern and David "Beach Bum" Williams. Williams at the time managed a popular low-profile online site and forum properly titled Coastal Shark Fishing. To this day, these two shark idealists are responsible for the widespread promotion of the catch and release movement of these apex predators along our gulf coast. In response to the power and overwhelming reach of the internet, the spread of conservation within the sharking community exploded and the rejuvenation of the overall popularity of land-based shark fishing in Texas took place.

Over the next few years the Texas Shark Rodeo continued on as expected. With a semi-isolated community mainly networked amongst friends, there were a handful of dominant teams year after year while other individuals just participated for fun. When team captains had to make submissions, they would send data and photos via email to be updated manually. This time consuming process wore on the event's organizers. Soon after, non-rodeo related work and family obligations had drawn both organizers further away from the tournament while leaving its participants still involved and thirsty for more. In an unfortunate and necessary action, the "rodeo" was forced to an abrupt but understanding end in 2006. The positive impact of this tournament in many facets of the sport were greater than perhaps we recognize. It was the shark conservation movement of Coastal Shark Fishing's Texas Shark Rodeo and even my own Extreme Coast that sparked the creation of the wildly popular Sharkathon a tournament that defined the model of today's current shark fishing tournaments.

Sharkathon had just celebrated their 10th anniversary this past fall and with that have provided a vivid outreach of conservation through their existence. Their catch-photo-release mentality set a new benchmark in high-profile tournaments and ultimately destroyed local well known kill tournaments. Sharkathon has been recognized as a steward of shark angling and continually seeks new ways to provide a positive influence in the fishing community. During preparations for last year's event, the founder of Sharkathon himself Curtis Mai provided a bold notion. He pondered the idea of breathing life back into the old shark rodeo. During the awards ceremony of the 2013 Sharkathon, it was officially announced that the Texas Shark Rodeo would be reborn. Mai states "Sharkathon, with Big Lou's consent, is proud to bring back the Texas Shark Rodeo, in hopes that we can promote the sport of C-P-R shark fishing, help scientific studies along the way, and maybe bring back that camaraderie and forging of life-long friendships to spend some quality time on the beach fishing."

This announcement by Mai was strongly accepted by the fellow sharker audience . Before the end of the day, teams were already being organized in anticipation. Then during the 2014 Big Shell Clean Up, anglers had a chance to sign up for the rodeo for the first time in several years. Entry as always remained free and the only thing guaranteed in the end are the classic wooden plaques once awarded to placing teams and notable sharks. With the strong backing of Sharkathon, sponsors are jumping aboard and in all likelihood some additional prizes will be distributed at the conclusion of the event in December. The decision to bring back the rodeo was heavily induced by adding to the fun-factor for your average beach fisherman. "Back in its heyday, the Texas Shark Rodeo was a serious thing for those of us that participated in it. Spur of the moment trips were taken simply because another team had recently caught sharks," noted Mai.

Both the Sharkathon committee and Mai believe the reappearance of the rodeo will spawn memorable adventures and the bonding of new friendships once acquired by the original participants all the while providing valuable shark research data for the marine institutes. The rodeo has always been competitive in a friendly manner without individuals expecting anything more than simple bragging rights. This is one of the rare tournaments in which so much hype and enthusiasm exists without the thought of luxurious prizes and awards. To be able to go out on your normal fishing adventures and know you can submit a shark for the benefit of science, gives a little more purpose to each outing. As mentioned, fishing with your fellow teammates can create a great bonding experience which will in return solidify great life-long friendships.

I myself have always had great experiences with the Texas Shark Rodeo and I am very happy to see it back in action! Whether winning or placing in the original event, I've always found the concept unique and the goals worthy. There are many new participants this go-around as well as some of the same old eager faces that once graced the rodeo. Over a decade ago the rodeo really helped sculpt me as a shark fisherman and to this very day the addiction resonates stronger than ever. I am in full confidence that Curtis Mai and Sharkathon will successfully take over the Texas Shark Rodeo - building upon the original foundation that Lou and Bum put so much work into. The overall goal is to continue the promotion of catch and release along with traditional shark awareness in the company of friends and teammates. Whether you are a participant or simply an online spectator, enjoy this crazy ride with us in 2014 that is known as the Texas Shark Rodeo.