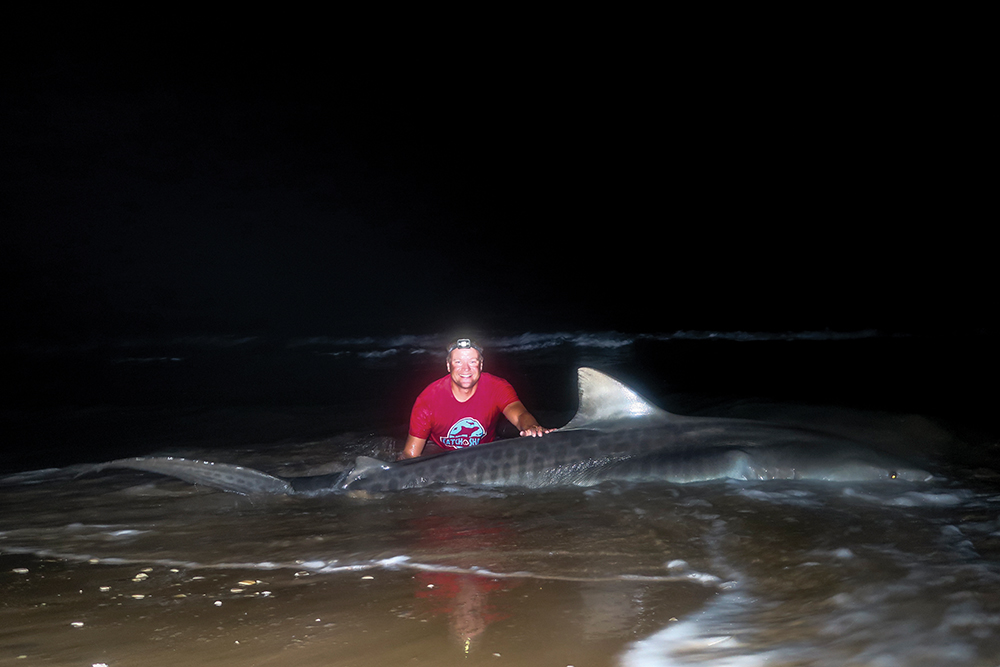 One fish, above all others, consumes my angling thoughts and priorities—the tiger shark.  I try to target this species on every trip I take. Most surf anglers, from beginners to veterans,  fantasize about tangling with a tiger. Massive and uncommon, like rare gems, these apex predators possess a mystical aura, one which commands respect. To battle one is an honor; landing one is among the most rewarding encounters to be had with a true beast, the undisputed monarch of our waters.

I usually put three to five tiger sharks on the beach per year. If I focused exclusively on using giant baits, those numbers would increase. Running charters discourages that, since small and medium-sized baits draw more strikes. The majority of my clients want action, not an all-or-nothing slight chance at a monster fish. When fishing alone, I regularly forego running small baits targeting other sharks, to increase my chances at a tiger. I've landed my share, but until recently, my list had one thing missing—an authentic twelve-foot specimen.  I'd come close, and felt deep down it was destined to happen.

Lately, my life has become rather complex. With my two year old daughter grasping the concept of life energetically and another child on the way, my free time is increasingly limited. I work multiple jobs to provide for my family, which restricts my personal fishing time. None of this makes me less motivated to tackle a twelve-foot tiger. When one of my regular clients booked an overnight charter in mid-July, I turned it into a multi-faceted plan. This gave me a brief window in which to wet a line, in hopes of quenching a deep thirst once and for all.

I didn't know what to expect, as the odds were stacked against me. South Texas beaches had been awash in cold water upwellings. This is not uncommon when early-summer south winds create powerful side-shore currents running up the beach. It's unclear why the water is sometimes ten degrees colder than expected, but this we know—the cold water is almost always dirty and nearly lifeless. Shark activity in the chilly water runs low, with the exception of the ultra-rare dusky sharks, which we ONLY see during these upwelling events.

When I arrived at the beach a little after midnight, I set up in an inviting location which recently had been fronted by lots of the cold water. I was after a dusky for myself, having helped a customer catch one a couple weeks earlier. I caught my last about two years ago, when I landed six in a brief period. In my sharking career, I've landed more duskys in the Texas surf than any other angler.  When I got out of the truck and stepped into the water, I could tell it had warmed up considerably; this meant the likelihood of encountering a dusky was low. Nonetheless, I set up camp to wait for sunrise.  When the sun peeked through the clouds, the surf had thankfully fallen quite calm. With hope, I began rigging up and deploying big baits and had a spread of four out by eight o'clock.

Unfortunately, the bite was dead, the water still dirty out to about 600 yards. I waited and waited, then did every shark dance I know to stir some action, but nothing happened. I marveled at the hard work I'd done; I had three 80Ws bombed out 700-800 yards with some mighty sexy baits set in the cleaner, green water. I had a fourth 80W up-current, a hair past the third sandbar. Finally, as the evening sun began to set, the short 80W went off, but I didn't land the fish, which completely wrecked my tackle. After I lost it, darkness fell and I had four big baits out again, while the clean water began inching its way closer to the beach.

I jumped in the truck to eat my beach dinner of Ramen noodles while listening to satellite radio.  After about fifteen minutes, the truck shook. Either a line had been cut, or a shark had picked up a bait.  When I jumped out of the vehicle, I heard the clicker start to sing. After a day of agonizing anticipation, I was hooked up! A shark had picked up a whole, slightly trimmed cownose ray on a single 24/0 circle hook. I knew it was a big fish as it slowly swam off with the giant bait. I strapped into the harness and waged my war.

Attached to a monster shark, alone on a dark beach, I reminisced about my old days fishing solo.  The moment when the fight begins generates the surreal euphoria which created my addiction to shark fishing. Going solo, man vs. beast, makes my adrenaline pump like no other angling activity, often feeling like an out of body experience. Throughout the fight, the shark made runs and slow-rolled offshore, providing a clue to its species. On occasion, I would gain line, and it would run up and down the beach. Several times, the fish briefly became tangled in the floats attached to my other leaders, almost magically freeing itself every time. The trend became repetitive—I'd slowly gain 50 yards of line, then the tiger would take 20 back instantly. Little by little, I was winning the war.

After nearly an hour, I succeeded in pulling the brute into the guts and bars, and it began swimming sideways more than out to sea. After another hour, my tiring opponent turned toward shore and rode a wave toward the beach. As luck would have it, this happened during a time when high tide covered the first bar with plenty of water. I ran about 50 yards down the beach and grabbed the leader. When I got my first clear look at my nemesis, I fully appreciated the massive dimensions of the mature male tiger. I'd strategically parked my truck on a section of beach with a sharp drop-off into a relatively deep first gut. This allowed me to handle such a monster more easily, so I could hold him upright and straighten him for a measurement.  After some wrestling, I was able to determine his length accurately—he spanned twelve feet, two inches!

I clicked a couple quick photos, then recorded the release of the tiger on video. The high tide and incoming waves helped me get all 700+ pounds of shark buoyant enough for me to drag him back out to sea. Using every ounce of my strength, I maneuvered the beast onto the first bar and pointed his head into the current.  When we made it to the second gut, I wrapped my arms around his fat body and gave him a shove with all my might.  And just like that, with a wave of his strong tail, he disappeared back into the inky abyss. Upon that moment, the truth hit me; I had finally landed my twelve-foot tiger, after hundreds of nights waiting anxiously.

The greatest feeling of accomplishment centered on the fact I had done it all myself, including releasing the shark still healthy.  What a rare, profound and satisfying moment!  Catching such a giant tiger checked off one of the last goals I'd set for myself; he'll be remembered forever.  As will the one that got away.  He took the short bait and proceeded to dump an 80W.  There was simply no turning that fish.  I truly appreciate the catch of my twelve-foot tiger, but mythical sea monsters like the one that completely destroyed me and my gear earlier that night are the ones that call me back for more.  In the end, I don't think my thirst for these kinds of adventures will ever be quenched; it burns like a raging Karankawa campfire lighting up the beach.