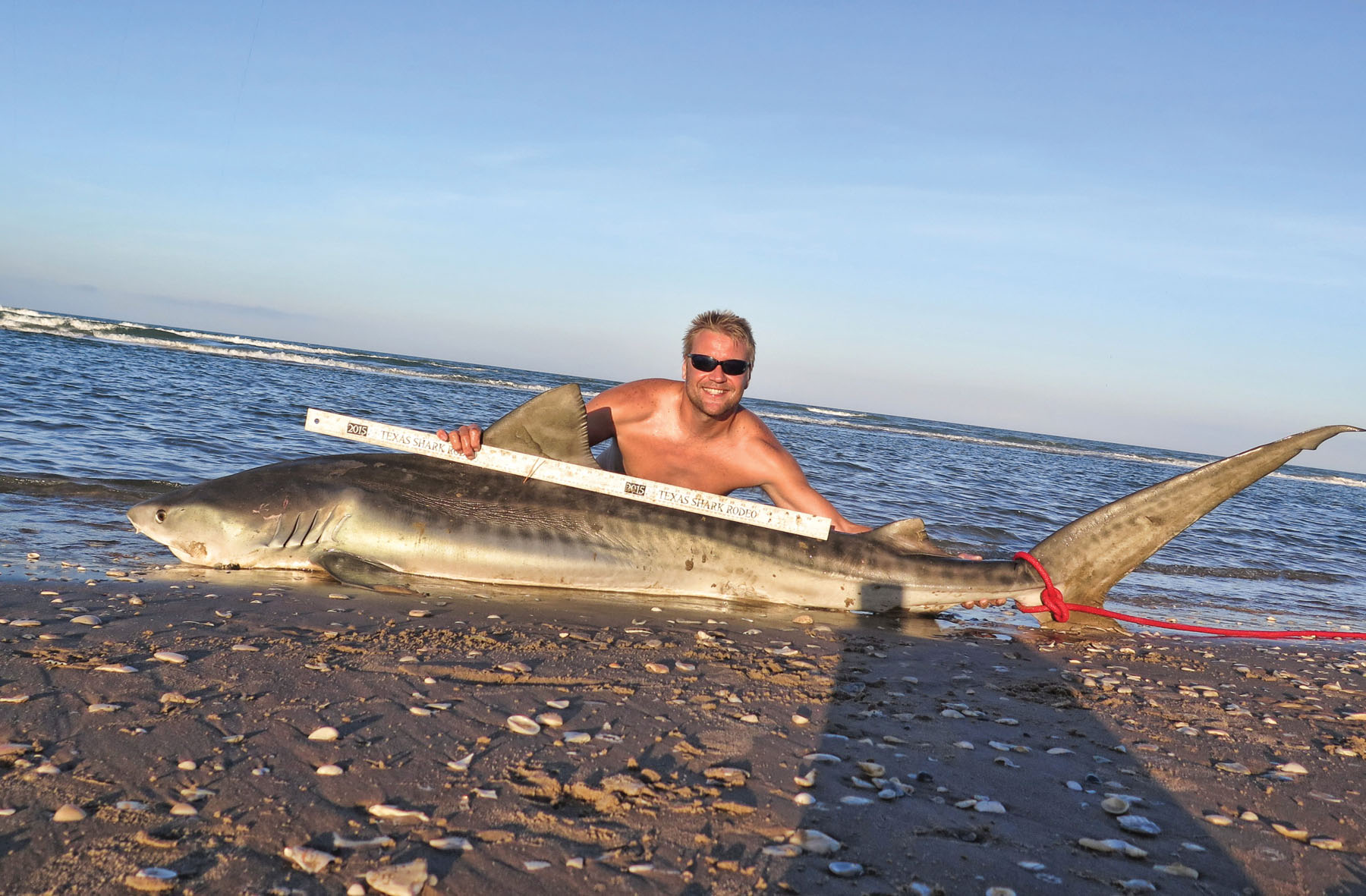 Double hook up tiger.
Whether in company of a few good friends or running solo, the water is where I escape the confines of a packed charter schedule, confusing politics and other societal boredom. The adventure we call fishing is therapy at its finest and I try to take advantage of every opportunity.

Fishermen have a special fish they dream of one day landing. For bay anglers it might be a 30-inch sea trout. For offshore anglers, maybe the majestic blue marlin. I dream of tiger sharks.

Even in their rookie stage most Texas shark fishermen want a tiger. While putting some clients on a healthy tiger earlier this summer my own addiction was going unfed. And, having put seven tigers on Texas sand in my career, it had been four years since my last. So this trip had importance, and with big sharks abounding and a three day break, it was time.

The tale of the trip I'm about to relate had potential problems written all over it. What has been an astounding year in terms of surf shark fishing has also presented an unfortunate anomaly. No frustrating sargassum seaweed but, as we have experienced several times in the past decade, the Padre Island National Seashore has been receiving strong cold-water upwellings. Not totally uncommon, this phenomenon usually lasts only a week or two. At the time of this trip it had been going on well over a month with surf zone temperatures running at least 10 degrees below the normal 87 mark. Isolated areas have occasionally dipped to the lower-70s. There is debate over the cause of the upwellings but nobody argues they have a profoundly negative impact on fishing. Regardless, my mind was set on doing this three day trip.

A byproduct of the upwellings are patches of cold, muddy water completely void of fish activity. Beyond this discolored zone, roughly 600 yards out, lies a defined color change. Heading south I found the surf still moderately large, all I could hope was that it would calm as forecasted. Another dark cloud was the fact that Gulf shrimp season was about to opena time when sharks are said to pull off the beach and head offshore for a free meal of cull. But like I said, I needed this break.

The plan was to get set up and get baits out in time for nighttime shark activity. Arriving to an area of interest toward the south end of PINS I noticed the surf was running a few degrees warmer. The water also was green, nearly all the water to the beach. Good tidal movement was another bonus. Sometimes the planets do align for something special.

That first night I hooked up and landed a large male bull shark. The 8'-1" specimen was rather slim but had a massive head. This has definitely been the year of the hammer and bull. I tagged and released the beautiful fish (all solo, I remind you) while throughout the night the only other action was smaller sharks wreaking havoc on the baits. The next day the water looked even better but typical of summer the daytime shark bite was slow.

I kept busy placing "uncrabbed" baits in the spread and persistence paid off as I managed to land an 8'-0" scalloped hammerhead. The tag and release was successful, something we always worry about; hammers landed on the beach have a notoriously high death rate. Seeing that fish swim off seemed a good omen. The rest of the day was quiet and again before dark I swapped baits, running out big ones in anticipation of nighttime action.

The first rod to go off in the Padre darkness did so with not-so-glamorous result. An average adult blacktip picked up a big bait as they often do, thus the reason for running multiple large baits in the spread. Roughly an hour later I hooked up again.

When a fish picks up a bait and heads immediately offshore you can bet it is a big one. This shark ran strong, straight offshore for a while, but hardly a match for the enthusiasm and experience I was putting into the fight. Within half an hour I had it on the first bar from the original 600 yard drop. I jumped down with the rack's light bar illuminating the beach to leader it to the sand. I had hold of the leader when it suddenly began to thrash violently. Eventually seeing it broadside, it had stripes – TIGER STRIPES.

Jackpot! This is what I came for. Though not a monster, the 8'-7" male filled my psychological bait bucket with joy. I quickly made the tag and release after snapping a couple of self-photos.

I still had two rods out but it took until nearly sunrise before I hooked up again – a stout 7'-11" female bull. Fighting the fish, it occurred to me that I had not experienced such large shark activity in several years and, coincidentally, it too came during July. I made another successful release and though I should have been dead-tired, sleep was the last thing on my mind.

Shortly after sunrise I began preparing baits and running them out into a daytime arrangement. The day passed in painfully slow fashion and most of it was spent napping and observing nature. All day without a bump on the rods, I was about to replace the baits for the evening bite when all hell broke loose.

My far northern bait was hit hard amid great surface ruckus and as I was getting harnessed up my southernmost bait was struck. This is going to be very interesting, I thought.

I began battling the original fish that was fighting hard and demanding my full attention. I had no choice except to let the other fish swim on its own against the rod, able only to momentarily keep track of it and manage the rod for a few random seconds at a time.

The first fish was still putting up a determined fight and all could think about was hurrying it in so I could deal with the second – hopefully with enough daylight remaining to get my nighttime baits out.

But the darned shark was taking its time as large ones can surely do. After 40 minutes or so from when it took the bait, I finally got it to the first bar. Still unsure of the species I jumped off the truck and ran down to grab the leader. It was dead low tide as I hurried through the wade gut and caught hold of the leader. It made a great display of thrashing before I could get it calmed to apply the tail rope. As it rolled on its side I realized – more stripes – another tiger!

Working frantically I got it tagged and made quick measurements. I prayed the hurried photos would turn out good and made busy dragging it out for the release. Taping out at 9'-6", this was my first-ever double-tiger trip. Celebrating had to wait, though, I still had a shark on the other rod.

Hopping back atop the truck I could see the shark was still hooked and chilling beyond the third sandbar. I began the fight and had it ready to leader at the first bar after roughly 15 minutes. The solid 8'-3" bull was quickly tagged. I got some photos and made the release. I was ecstatic.

No rest for the wicked. I scurried through re-baiting as quickly as I could and finished with nightfall blanketing the beach. The night was not nearly as productive but still interesting with small sharks wreaking havoc on my big baits, bite by bite. Right before sunrise I got a hellacious run on my 80W reel, only to have the bait dropped after a few seconds.

After a couple of hours I brought all the baits in and on the 80W all that remained of a 6-foot-class spinner shark was the head. The spinner evidently hit the bait during the night and almost immediately, almighty jaws herself struck and demolished everything but the head. For another shark to eat a six-footer, you know it had to be of enormous proportions.

Ending the trip and driving up the beach, all I think about was the monster that got away.