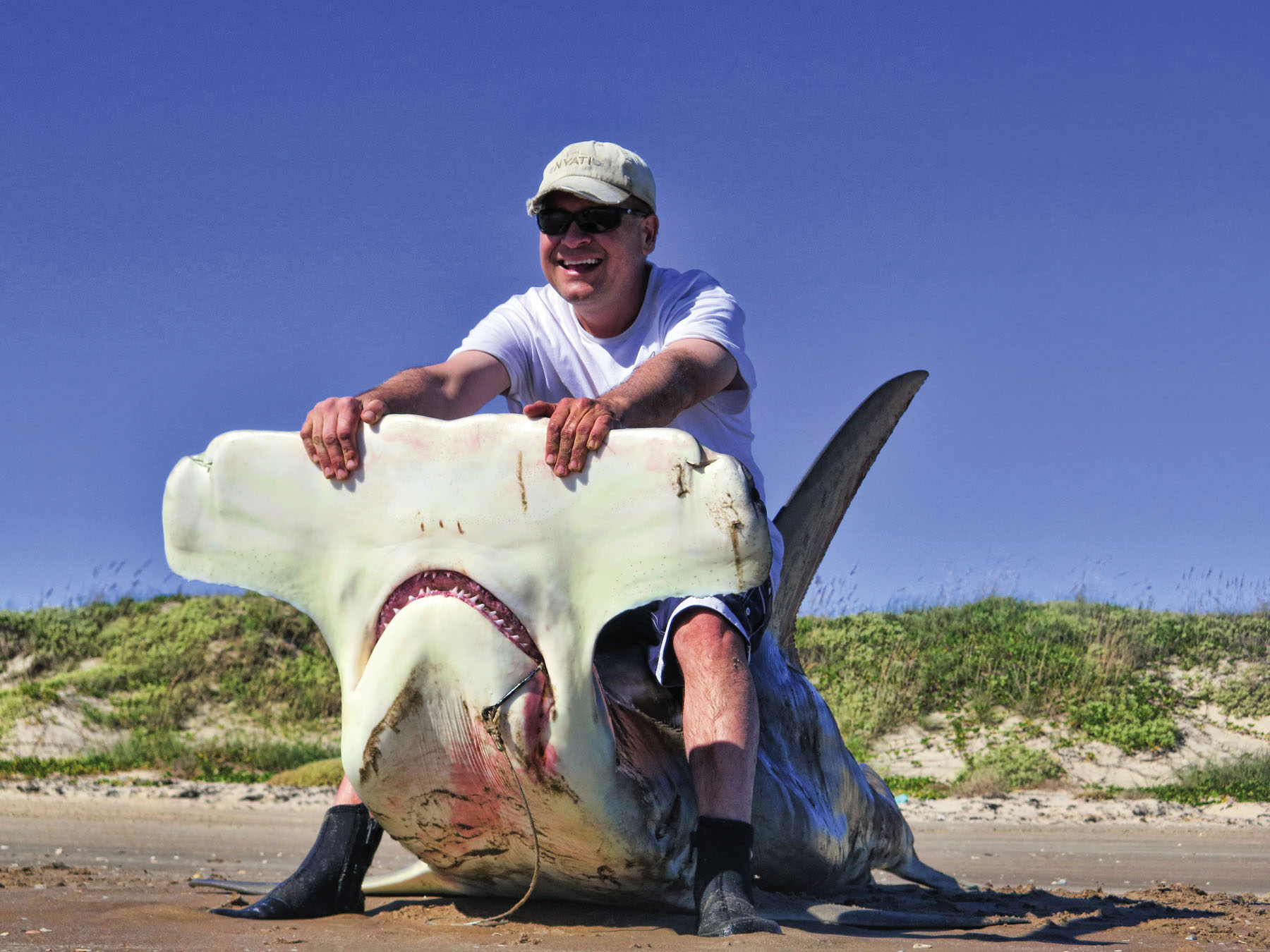 Scott showing off the business end of the incredible hammerhead.
We were on a routine sharking trip to North Padre Island; Scott Nelson, Mike Shindle and yours truly. Peering out a calm gulf, Indian summer was in full bloom and a brilliant display of the Milky Way stretched from horizon to horizon. This is our favorite time of year, the crowds are gone and the fall migration of bait and predators is at its peak.

Our plan of fishing several days allowed plenty of time to take advantage of the calm weather. We set up late on the first afternoon with several irresistibly large baits deployed a lengthy distance by sunset. Later that evening, while finally managing to cook up a late meal, Scott's large shark rig went off. We ran the short distance to his truck and instantly he yelled, "MONSTER!" After observing Scott fighting the fish for a couple of minutes it was obvious that it was the Real McCoya most worthy sea beast.

Several minutes passed and the shark was dumping line with ease. Fortunately, Scott was rigged with an older Shimano 80W stacked full of heavy braid. Line capacity was on our side, thus no one was sweating, yet. Twenty minutes into the fight the shark had taken well over 300 yards without a hiccup. Shindle and I made busy getting Scott strapped in and harnessed up.

The stage was set perfectly as we began developing strategies for landing a very large fish. Little did we know we were far from that point. As we approached 45 minutes into Scott's locked-down brawl he had yet to gain line. Continually bumping up the drag, the shark was slowing but not stopping.

Mike and I realized Scott was nearing the pain threshold, putting everything into this fish, mentally and physically. For insurance, I stood in front to offer a shoulder prop for the rod while Mike braced his shoulders and upper back from behind.

Scott continued to lay back into the fish with everything he had and we could not help but glance occasionally at the reel as line continued to evaporate. We began guessing the species–split between "grander" tiger and massive hammerhead. In our collective sharking experience none of us had been tested by a shark of this size and strength and the fear that we might never get to see it began haunting us.

Nearly an hour and a half had elapsed since this mammoth fish had picked up the large stingray bait. Scott managed to stop the fish several times and gain microscopic inches, only to have it taken back within seconds. The drag tension was so tight that the line creaked an eerie song as it passed through the guides. The fighting belt Scott started with had been wrecked, and the replacement we struggled to get him into had already broken and been repaired as he continued the battle.

Despite the torturous strain Scott remained incredibly focused. With roughly a mile of 200-lb braided Spectra stretching into the Gulf of Mexico, the hub of the spool was in sight and line was still slowly creeping off. We gave Scott the old rockstar pep talk and told him this was his time; he needed to dig down to his reserves and turn the tide. This was HIS fish!

Pushing the reel to its limit, Scott continued the fight furiously. After a couple minutes of the most brutal tug-of-war, FINALLY, the fish turned for the first time. At its lowest point, there might have been fewer than 30 yards left on the reel. When it seemed he might have gained a hundred yards it would immediately dump back out. Twice this happened.

At the two hour mark Scott had a couple hundred yards on the reel but progress was still very slow. He laid into the rod once again and suddenly slack appeared. Oh No!

Scott was reeling slack frantically and though we hoped the fish was swimming in, we feared a cut-off. One hundred, two hundred yards and, WHAM! The fish was still on and headed back out. The run was short and ended in stalemate, nothing happening, dead weight. We began to fear that the fish might have wrapped in the leader when it swam in.

At this point the fish was roughly 800-900 yards offshore and not fighting. Scott tried everything to winch it in, inches at a time. After 15-20 minutes, with a small amount of line gained–horror of horrors–the line broke. We were stunned.

Dejected and walking back to my camp I saw Scott taking off in the kayak. He had a glimmer of hope he could find his leader float. I knew exactly what he was doing and what he was feeling, and seeing his headlamp further and further offshore I knew I had to join him. I jumped in my kayak. Nearly a half mile out we were searching for a virtual needle in a haystack.

Time passed and still nothing. My thoughts turned to waiting until the morning but Scott was determined to find it as soon as possible; believing he could somehow get the shark unwrapped and save its life. We paddled on in darkness without success. Ultimately we decided to head in. Paddling back I saw something in my headlight and sure enough it was a leader float. My first thought was one of my own long baits that were out. Luck was with us though and it was indeed Scott's. I yelled for him.

Scott paddled up and we tried pulling the float line attached to the leader to no avail, the weight was tremendous and the wind-chop was wreaking havoc. At a loss for a better plan, I told Scott to hang on to the float while I paddled back to get his rod, thinking we could pull up the leader and clip back into it. The trip took 30 minutes and by then one of Scott's two headlamps had died. We had to act fast.

Pulling up the end of the leader, I attached another float for safety, and then clipped in with Scott's rod. Slight movement from below confirmed the fish was still alive. We were back in business.

We paddled straight toward my truck paying out line and threw the rod up on the rack. The plan was to hopefully winch the fish in–a fish we had yet to see. We are able to gain maybe 30 yards of line before reaching another stalemate.

It was not until nearly sunrise when we could continue the battle. The plan was for me to go back out and clip in another float for greater line buoyancy. Scott and Shindle would remain on the beach and attempt to winch the fish to the beach–however long it took.

Being atop the truck lent the advantage that the line would not rub the sandbars. It took an hour but at last we had the fish within 50 yards. I could tell it was indeed wrapped in the leader and in very bad shape. Glimpses of it began to tell of its incredible size.

Finally, after a horrendously tedious process, Scott landed the fish on the beach and it was massive!

We unraveled the leader and quickly assessed how to undertake reviving it while measurements were made. In the most grueling battle on rod and reel I have ever witnessed, the 13'-3" hammerhead had ultimately met its fate in an unfortunate situation.

The reality of landing this fish and not being able to see it swim off was a real downer for all of us. A successful release would have been an unrivaled accomplishment off our coast. This was, after all, one of the largest great hammerheads ever taken from the surf west of the Mississippi. We quickly got into action contacting research institutes about the possible study value of Scott's hammerhead.

Despite a somewhat tragic ending, the silver lining is that this fish will provide valuable biological data for shark management. The girth measurement of 70" put the estimated weight at well over 800 pounds. Any "trophy" hunter would have taken it to town to be weighed for a possible state record. We all purely rejected the idea, knowing it would be in far better hands with scientists, versus possible bad press over "yet another great fish killed for a record."

Scott's concern for the life of that shark bordered on lunacy. Jumping in a kayak, paddling into total darkness to search for a needle in a haystack, seconds after a bone-breaking battle on the beach–Scott demonstrated extreme character and dedication to shark conservation.

But that is who he is and that is what we do to save a majestic specimen of nature. Its demise was terribly unfortunate. Scott should be forever proud of this monumental angling feat. Shindle and I were blessed to be there and share in his amazing experience.