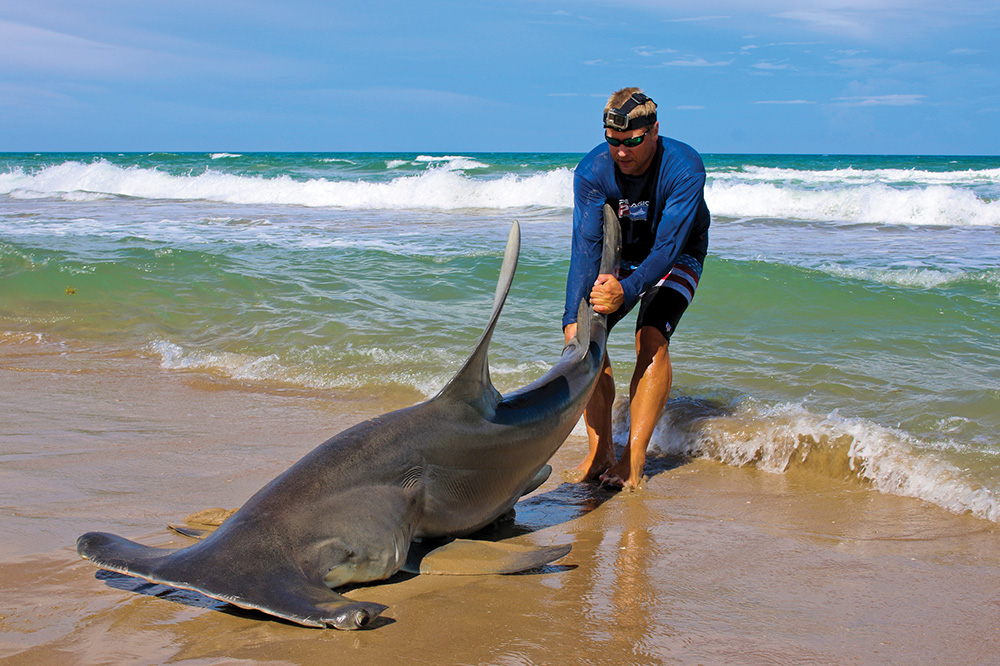 Oz accomplishing a successful release of a large hammer.

Fishing the surf is an odd combination of peaceful relaxation and a true primal experience. Mixed within the fine grains of blowing sand is a whole new dimension to become engulfed within.  I often use the term “surreal” to describe the Texas coast where land meets the mysterious Gulf of Mexico. It is no wonder so many outdoors folks take to the surf for recreation. Some anglers throw plugs tirelessly into the morning surf for slob seatrout while others cast flies at frenzying jackfish. Other adventurers,  like me, kayak oversized baits far offshore for sea monsters.

Last year's disaster they called Harvey took an extreme toll on our entire coast. In addition, an exceptionally cold winter seemed to never end. At the beginning of the year the outlook for 2018 seemed bleak. January and February were much colder than normal and the surf became virtually dormant. Surf water temperatures in the 50s more than two months relocated large populations of normally shallow roaming fish to warmer offshore depths. When it seemed that we were lost for hope, a light appeared at the end of the tunnel as a March warming trend developed. When April rolled around, the surf game changed dramatically for the better. Little did we know 2018 would turn out to be one of the most incredible surf fishing years on record.

There are many factors that can influence the quality of surf fishing and our ability to access the fishery; quite often more than one will be in play at any given time.  First and foremost, for shark anglers in particular, would be the amount of sargassum coming ashore. While this nuisance weed provides habitat for a tremendous amount of marine organisms, from an angling standpoint, less is better. Sargassum wreaks havoc on the ability to keep casted or kayaked baits in operation. Fortunately we saw virtually no sargassum throughout 2018 and more people took to the surf than in recent memory. And with this, greater numbers of anglers put more fish on the beach. Social media contributed in large amount as reports and photos of fishing success circulated widely.

Other factors that affected our waters was uncommonly abundant rainfall and runoff. Here in South Texas, during late spring and again in late summer, we received week-long rain events that delivered  as much as 10 to 20 inches locally. Two such events within a relatively short span of time is extremely rare. During the latter event, areas of the park road on Padre Island were completely under water for days. While this might be normal inland it was a mindblower on North Padre. Rainwater has to go somewhere and the runoff interestingly combines with offshore or longshore currents to create coldwater upwellings. This changes the structure of the entire surf fishery.

One direct result of the major coldwater upwellings this past summer was the presence of the dusky sharks. Dusky sharks are typically more of an offshore pelagic species that prefer cooler water. When the runoff shut down most of the traditional surf bite, the dusky sharks appeared with a vengeance.  Prior to 2018 there have been but a handful of mature duskys landed from Texas surf (less than a dozen that I can confirm). Next to makos, they are probably our rarest surf sharks. This summer I was lucky to land five, while putting Alexis on one of her own. This is such an incredible specimen to see in the shallows. My largest this year taped nearly 11 feet – exceeding the current state record. We may never see another year in our lifetime with a dusky window as explosive as what we encountered.

With surf fishing across the board being very good, it was by far the shark fishing that took center stage. Big shark activity ignited predictably in June with the migration of cownose rays along the Coastal Bend. Countless thousands of cownose staked claim and gorged on the abundant coquina clams, which in turn attracted great numbers of sharks to the surf zone. From June through September we saw more big sharks landed than any year in modern history.

Many very notable landings contributed to change the landscape of Texas shark fishing and perhaps the most notable was Ray Cedillo’s great hammerhead that taped fourteen feet. This impressive catch came on a whole cownose for bait utilizing a genuine Catch Sharks precision leader. Many other great hammerheads between 10 and 12 foot were landed throughout the summer. Alexis and I both had hammers over 10 feet and soon after I ended up hooking a giant that completely dumped  a large shark reel packed full of braided spectra.  Hammerheads are a very cool species and though while visually impressive, they are actually quite fragile. The larger the hammer, the harder to accomplish a successful release. Fortunately all our big hammers were released without problems this year. The large circle hooks we have been using help ensure a corner-of-the-mouth hookset, thus making removing the hook quicker and easier.

Large bull sharks showed in late spring and were caught up and down the Texas coast. While hard to verify, some catches were claimed to exceed 9 feet, which is spectacular. What really got people excited though was not the bulls or hammers, but the tiger sharks. Tigers are the most dominant apex predator we have in the gulf. They will eat virtually anything. They are beastly in size and power, and thus do what they want at will. For an unknown reason, whether prey abundance or water salinity, the tigers were thick in the shallows. Tiger sharks were caught far up the Texas coast where they traditionally had never been. This was doubtless due to a period of Caribbean-like water clarity near Galveston. Further south around Corpus, the tiger sharks were extremely thick during August. While the month of August is usually the optimal month to target them, this year was simply amazing. While the majority of tigers averaged 8- to 9 feet, some monster specimens exceeding 12 feet were caught this summer.

Whether you gauge fishing success by the copious landings of pompano, stellar surf trout, or mammoth sharks, 2018 was certainly one for the record books . We just barely dodged a catastrophic red tide and avoided tropical systems that developed into anything more than heavy rain. We saw unique species and sharks of all sizes. But even with the success surf anglers enjoyed this year, a huge question remains. What will 2019 bring for us?

As noted before, we will not know until the time actually comes. The only thing to expect here in Texas is the unexpected.  While some may think that we perhaps peaked with an all-time high, I think there lies a chance that things will get even better. Regardless of what the future brings, you need to appreciate when things are good. And when they are really good, you MUST jump on the opportunity to get on fish. It could disappear just as quickly as it materialized.