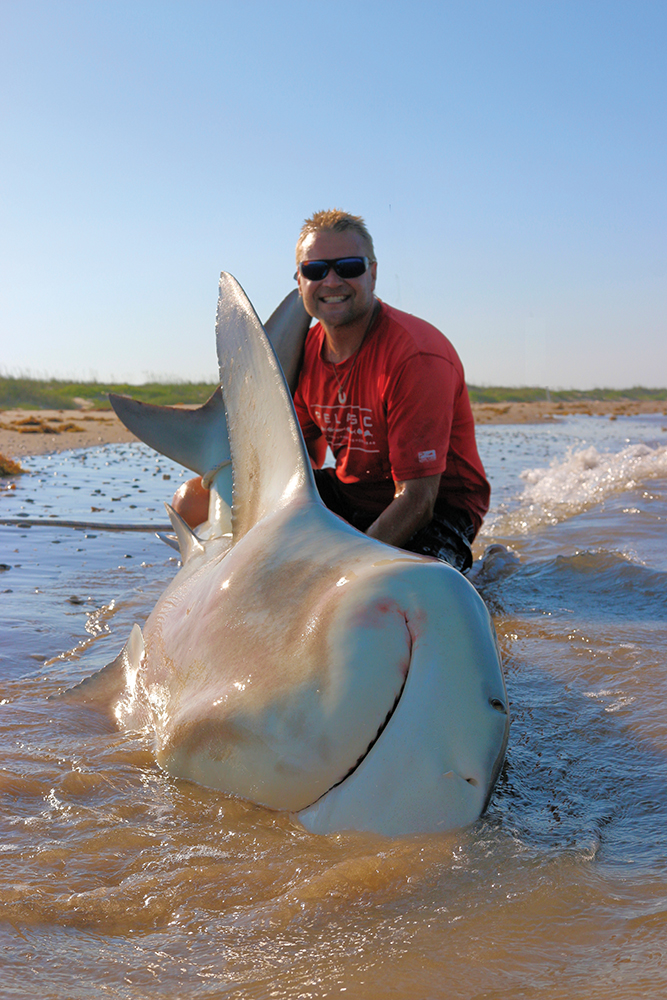 As the water continues to warm in May, the marine food chain moves closer inshore along the Texas coast. May is the month that the surf zone teems with everything from the smallest of forage species to the largest predators. From that wide spectrum of sea creatures, including at least a dozen shark species, one reigns supreme in the “bad attitude” category – the bull shark.

Bull sharks roam our coastline at varying distances from shore throughout the year, but during the month of May, the mature breeding stock of the species come storming into the surf. Robust females slowly cruise the guts and sandbars and along the beaches, where abundant forage satisfies their voracious appetites. This is also a month when jack crevalle come to the surf in great numbers. Not known for their speed, and scavengers by nature, bull sharks readily inhale anything in their path that is wounded or dead. During the chaos of the springtime frenzied feeding, many fish get injured or killed for various reasons. Jackfish may get chased down by the speedier blacktip sharks, that typically take only a bite or two, leaving the rest to the scavenging bulls.

While much of the bull shark diet is supplied via scavenging, they are also known for targeting live stingrays. With the approach of summer, like clockwork, stingrays make their way to the surf zone. The largest of these are the southern and roughtail species, both capable of attaining wingspans of six feet and more and weighing 200 pounds. The same as tiger sharks and large hammers, the bull sharks feast on these slow moving giants. It is believed that pheromones emitted by these large and often pregnant female rays are a virtual “Bat-Signal” to these large, hungry predators. Even the ray’s impressive barbs are no defense against shark attacks. It is not uncommon to see large sharks with multiple stingray barbs impaled in the tissue of their mouths. To them, the trade off is well worth it.

We know the sharks are here and stocking up on food. But there must also be another reason for their presence. The large female bulls that patrol the surf-zone and hang out in inshore waters are also here to give birth. Female bulls enter through passes and channels, searching for safe locations to drop their pups.  Sometimes far back in the bays and estuaries where little predatory threat exists for the pups and food is abundant. Bull sharks, through a process of osmoregulation, can remain in fresh water habitat for lengthy periods, many miles up rivers that run to the sea. One notable specimen was captured 700 miles up the Mississippi River.

Like tiger sharks, bulls are sometimes called trashcans of the sea. They will eat just about anything. Old-time shark fishermen will tell you that if you want to catch the biggest bull shark of your life, use a small shark for bait and target them in the month of May. While obviously these antics were done decades ago before modern regulations, it is telltale regarding their appetite. In today's Texas shark fishery, the two most popular baits are jack crevalle and stingray. Bulls are a sucker for a large, bloody jack. If there are no jacks in the surf, they will certainly not pass on a slab of juicy ray.

It should be noted that come September 1st, shark anglers plying state waters will be allowed to use only  non-offset–non-stainless steel circle hooks. This will greatly hamper the use of whole jack crevalle on traditional J-hook setups. Point being, get used to utilizing circle hooks for your drops even while running big baits. You will have to experiment with rigging techniques but ultimately you will have no choice.

From an angling standpoint, bulls use their bulk and mass, not speed during the fight, as other species do. Bulls less than 6-feet put up a rather lackluster fight. It isn't until they reach 7 or 8-feet that they really put a hurting on your tackle. While every fish is different, I've even had large specimens swim straight to be beach before realizing they were hooked. In general, though, tie into one of 8-feet or longer and you’ve got a real battle on your hands. Many seem to stop growing in length after about 8.5-feet and simply bulk up. Upwards of 500 pounds translates to a long, stubborn fight. The biggest issue when battling one of these giants is getting them over the sandbars. Rather than swimming over the bars, they will simply avoid them and run parallel instead. Frustrating for anglers but part of the game.

When you finally get a large bull close to the beach, the tail rope becomes an indispensable tool. Attempting to drag one by the leader alone can be an arduous task. Affixing a lasso of 1/2 or 5/8-inch rope around the tail helps subdue and secure the fish.

Large female bull sharks often exhibit surprising mating scars – male bulls are evidently very rough in their mating behavior. While appearing as the result of attack meant to kill, it’s just part of the mating ritual and some large females carry scars from prior mating seasons. While bulls are a very hardy species, be sure to work the hook out quickly and take your photos in a timely manner. If you are tagging as well, be sure to have everything ready to accomplish it as efficiently as possible. If the big females are pregnant, you certainly want to get them back swimming on their own as soon as possible.

If all goes well after your epic bull shark is landed, the fish will have swam away to reproduce for many years to come. Bulls are one of the species I preach most adamantly to release. Their numbers have declined the past 30 years and only recently are we beginning to see the return of the “bull-hemoths” to our waters. Not many years ago a bull shark of 8-feet was considered a true trophy in Texas. It has only been the last several years that we have begun seeing lengths of 9-feet.

While among the most dangerous of shark species, they also play a vital role in the regulation and stabilization of our marine ecosystems. Each encounter with a monster bull reminds me how much I respect the species and how much I cherish the experiences I have been blessed to enjoy.