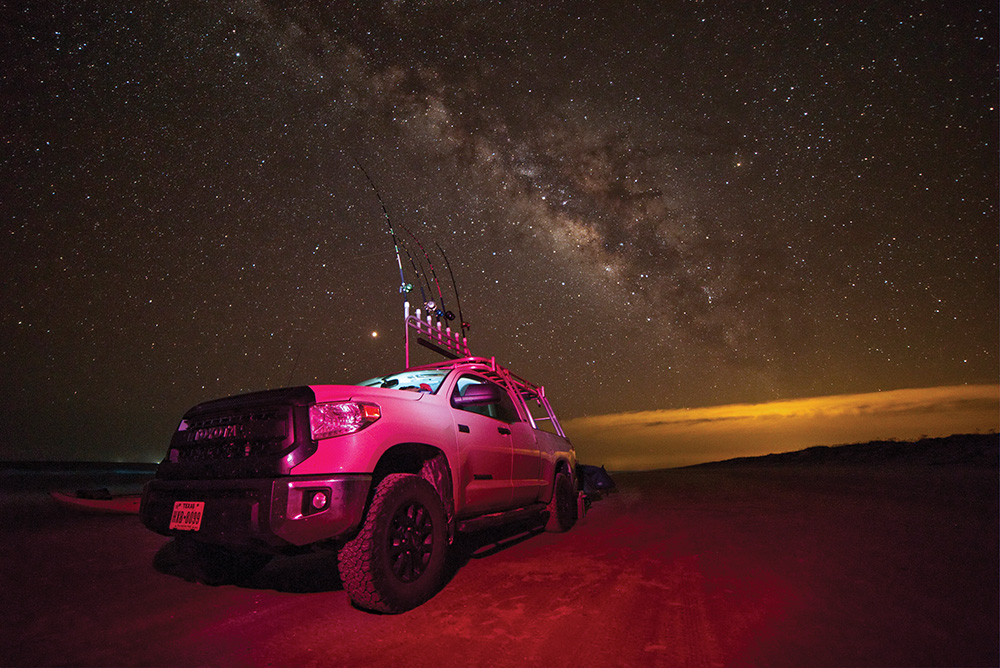 South Texas shark anglers are enjoying an exceptional year, some say the best they’ve ever seen. While our shark fisheries are not nearly as healthy worldwide as in the 1960s and 70s, you’d never know it from catches that have been brought to the sand. Countless tiger sharks and giant hammerheads have been scratched off many anglers bucket lists.

For seasoned shark fishermen, the weather and water conditions have been a dream come true. Calm and clear water is usually highly-beneficial to surf fisherman and when it comes to big shark angling, the clearer the water the better. Pesky sargassum that hinders virtually every type of surf fishing has been almost completely absent all year. These near pristine conditions have attracted legions of shark anglers that contributed very strongly to the year’s exceptional landings.

Apart from obviously great weather and water conditions, many thoughts and theories are circulating in attempt to further explain the excellent fishing. Initially it was believed that the lack of rain throughout the drought-like spring months were the major contributor, via the lack of river inflows and freshwater runoff – the clean water and abundance of bait attracting vast numbers of predators to the surf zone. Mackerel, bonito, and jacks are known to blast right up to the beach when the water gets right. And sharks come with them. The lack of tropical weather activity through the summer also contributed to the water quality.

May and June gave us some of the best action for the largest bull sharks we have seen in Texas in quite some time. We tagged and released quality fish up to nine feet in length on my charters. There is always a degree of mystery anytime a client, child or adult, fights a shark into the night. Without knowing what to expect, when they finally see it for the first time, it’s like they won the Super Bowl.

Bull sharks really begin to fill out when they grow to seven feet, and when they reach eight feet they become beastly. For a period of about six weeks we were averaging at least one large bull on nearly every trip.

Then came July and tiger sharks in great numbers. Ironically, the majority of tigers were not caught down south as they normally are. Most of them came from the PINS beach and farther north. From Corpus Christi to Port Aransas to Galveston, these apex predators delighted surf anglers all along the coast.

Historically speaking, the upper Texas coast does not get a lot of surf tigers. The shallower and dirtier water evidently discourages this species from inhabiting the surf zone in that region, but in no way deters the bulls and blacktips from making it their summer home. Having said that, and no surprise given this phenomenal year we’ve been enjoying, there were some very respectable ten and eleven foot tigers landed up there.

July also marked an impressive milestone for one diehard angler. My good friend and regular client, Ray Cedillo, fought and landed a massive great hammerhead. Ray’s giant measured out at fourteen feet and likely would have tipped the scale to 1000 pounds, had it been weighed. Ray fought the beast on very appropriate gear and was able to land this shark that would otherwise have spooled many other shark reels.

This beast of a shark is the largest to be landed from the Texas surf in modern history, topping Scott Nelson's 13'-3" hammer and my own 13'-0" hammer. It is good to see a shark of such size caught here for once, instead of Florida. In addition to Ray's enormous hammerhead, there were several other very respectable hammers landed during July.

Both tigers and big hammers prowl the surf zone in search of large stingrays, which is their favorite prey. Mature southern and roughtail stingrays give birth to their young in the surf and the sharks key on these easy meals. Sometimes the meal will be the newborn stingray pups, other times it will be the adult. My last trip down the beach I noticed the remains of what would have been a southern stingray between 150 and 200 pounds. What remained of the ray had numerous large shark bites, some which appeared to be tiger, some bull. The sharks had eaten half of the ray before it washed up on the beach.

With the Gulf shrimp season opening in mid-July, great numbers of smaller sharks moved out to the shrimping grounds, attracted by net cull the trawlers discard, while the larger species lingered in the surf to dine on the stingrays. Naturally, with the abundance of smaller species following the shrimpers and only the bigger sharks present in the surf, the fishing on PINS became very slow and will remain so through most of August.

Working our way through September, the beaches are going to come alive, the likes of which many people have never seen. From the coastal bend south, the dusky anchovies get pushed up to the beaches in millions. These small fish just over an inch long will school or “ball up” in huge masses, literally tons of them. The baitballs become established offshore and, as the day goes on, get pushed closer to the surf zone by predators feeding on them. This will draw the majority of the blacktips and medium-sized bulls back to the beach. In addition to sharks, millions of skipjack and Spanish mackerel join in the frenzied feeding activity. This period brings a great chance to land a large jack crevalle on fly or see a tarpon free jumping just outside the breakers.

There are many question marks looming for our fall season. It is only a matter of time until the western coast of Africa gets it's show on the road with tropical weather developments. We have been protected for nearly the entire summer by a layer of Saharan dust lingering in the atmosphere and preventing the formation of massive low-pressure systems that spin across the Atlantic from West Africa and become hurricanes. Let’s all pray the tropics remain quiet and stable as we head toward the peak of tropical weather season.

Another great concern is the annual late-summer and early-fall threat of red tide. Red tide is an algal bloom that happens almost without warning and can spread across vast areas in a matter of a few days.

Its scientific name is K brevis and it is actually red in color. When the concentrations of this algae become great enough it can actually turn ocean and bay waters red for miles. Red tide is harmful to fish and marine life in general as it depletes the water’s oxygen content and also releases potent neurotoxins that paralyze the respiratory muscles of fish and mammals. We have suffered several massive fish kills along the Texas coast due to red tide in the recent past. The same as hurricanes, all we can do is hope and pray and wait and see.

Right now, everything a coastal angler could ever hope for is aligning perfectly and September’s fishing could turn out to be one for the record books. Let’s all pray this dream season we’re living continues to come true.