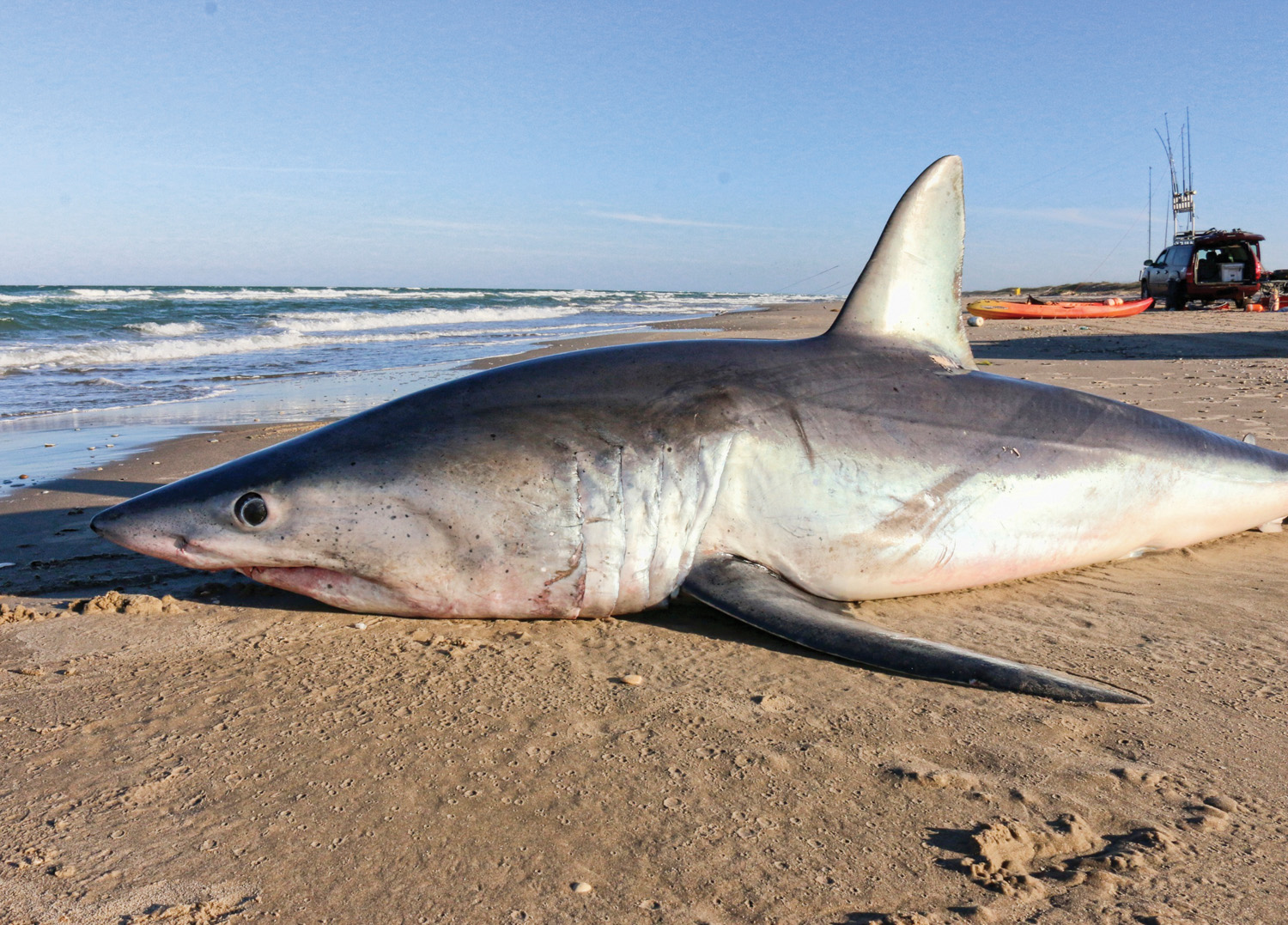 Another great mako shark from PINS surf landed on Catch Sharks leader.
Evolution is inevitable. As nature itself evolves, so do we as humans, constantly seeking better methods that modern technology provides. Every sport and outdoor pastime is enhanced with advances in gear and tool manufacture. Whether these ideas enjoy initial widespread acceptance, many eventually become the standards by which other products are judged.

Through constant advances in technology, modern sporting equipment is far superior than anything previously available. This is especially true if you compare fishing tackle of say twenty years ago with products we use today. From braided line to mechanically enhanced reels, improvements have been emerging that greatly increase angling efficiency and success.

I take fishing and fishing tackle very seriously and believe very strongly in the old adage – you get what you pay for. Generic fishing line and terminal tackle are two of the greatest examples – cheaper, because they are made of inferior materials and mass-assembled with less than exacting attention to detail.

Items fashioned from lesser-quality materials often fail in service and rarely provide the long service life of superior goods. You can spot the difference immediately in a cheaply made lure versus one crafted with great detail from state-of-the-art materials. Cheap paint jobs scuff the first time you tie them on and generic hooks often result in the loss of the first good fish hooked.

We see the same things with reels. Whether cheap modern-day imitations or leftovers from yesteryear, you still get only what you pay for. On the other hand, we find premium products crafted of highest-quality materials and engineered to exacting tolerances. Some of my newer reels are so intricate in design that you almost need a PhD in reel technology to service them – but they perform flawlessly, even when stressed beyond the intended service range. You could say quality and precision are everything, in every sense of the word.

Shark fishing is a concoction of various gear, all working together to achieve success. When dealing with sharks of several hundred pounds, or more, tackle failure is simply not an option. A broken hook or swivel can ruin your trip. You don't need an array of gold-plated goodies, but strong terminal tackle that is capable of withstanding the stress of landing large fish and withstanding the elements is essential. Since coming onto the shark fishing scene many moons ago, I have always been extremely finicky with my terminal tackle.

I started out making my own shark leaders simply because the ones I made by hand were superior to anything I could buy pre-made, and I enjoyed great success for years. To say that it required product innovations of great significance for me to even consider trying anything but my own handmade shark leaders would be a great understatement. But - terminal tackle for serious shark fishing was evolving and a game-changing improvement in materials and design was emerging. I quickly took note.

Before long, Steven began pioneering new ideas and technology that had never been applied in shark fishing. After a couple years of exploring and experimenting, his new gear caught my attention. Steven started to carefully focus on improving and making the most optimized and efficient leaders possible. This was done through the consideration of angling, science, and reality. What resulted were portions of his tackle to which he would apply a unique protective coating. Steven named his process Electroreception Deception, ED for short. This environmentally-friendly polyester-based coating provides an attractive, corrosion resistant finish without the use of solvents or heavy metals. The ED provides insulating properties to 1000 volts per mil.  It is quite durable, resisting sand and salt, which is a huge advantage in surf fishing.

Steven soon offered that I might try the gear, to gather my input. Being slightly hesitant at first (wary of using a leader other than my own) I gave the tackle a fair shake-down and was immediately impressed. The craftsmanship was very precise, superior even to what I made. Not only did the leaders appear to be of quality levels above anything on the market, they stood up to the test of giant sharks off the beach.

Steven would go as far as applying heat-shrink covering to the crimps to make things streamlined and more natural in appearance. Other unique features were the back-braiding double-crimped sections for the monofilament portion of the traces. For large traditional Mustad circle and J-style hooks, the ED coating (available in various colors) extended the longevity of the hooks, not allowing them to rust as quickly. Saltwater is a harsh element and any true sharker knows it is extremely difficult to prevent rust and corrosion of non-stainless components.

This terminal tackle, essentially the Ferrari of shark fishing leaders, quickly became worth their weight in gold to me. For the past several years I have landed some of the largest sharks brought to Texas sand with them. An extremely impressive unofficial state record bull shark was landed and released on a Catch Sharks leader during one of my charters. My personal unofficial record mako shark, last year, was also landed on this gear. In addition, these remain the only leaders in Texas to have landed sharks greater than 13-feet from the Texas surf the last three years - one being my hammer, the other Steven's tiger. The pure quality and design of these leaders has also been proven with many tournament wins by various anglers. Interestingly, with virtually no advertising effort, the majority of sales resulted simply through word-of-mouth and people taking note of what successful anglers were using.

In September 2017 the shark fishing scene would take a new turn for me when Steven asked whether I might have interest in acquiring his Catch Sharks enterprise. Even though I had said many times that I had no interest in becoming involved in the fishing tackle business – this opportunity included the special charm of a product line I have relied upon and been proud to use.

My intention is to continue with the manufacture of the finest-quality products, catering to the needs of land-based shark fishermen. My goal will be to continuously seek design and material improvements that will increase angling success.

In addition to shark gear, Catch Sharks offers a line of leaders dedicated to large jack crevalle and oversized red drum in the surf. Come wintertime and the oversized black drum run, we will put additional focus upon cast-out crab leaders for the big uglies.

I am very excited with the direction things are headed. My surf fishing charters will provide a testing ground for new innovations within the product line. Catch Sharks will strive to maintain the excellent reputation for quality Steven made it famous with, and I will incorporate further innovation developing new products.