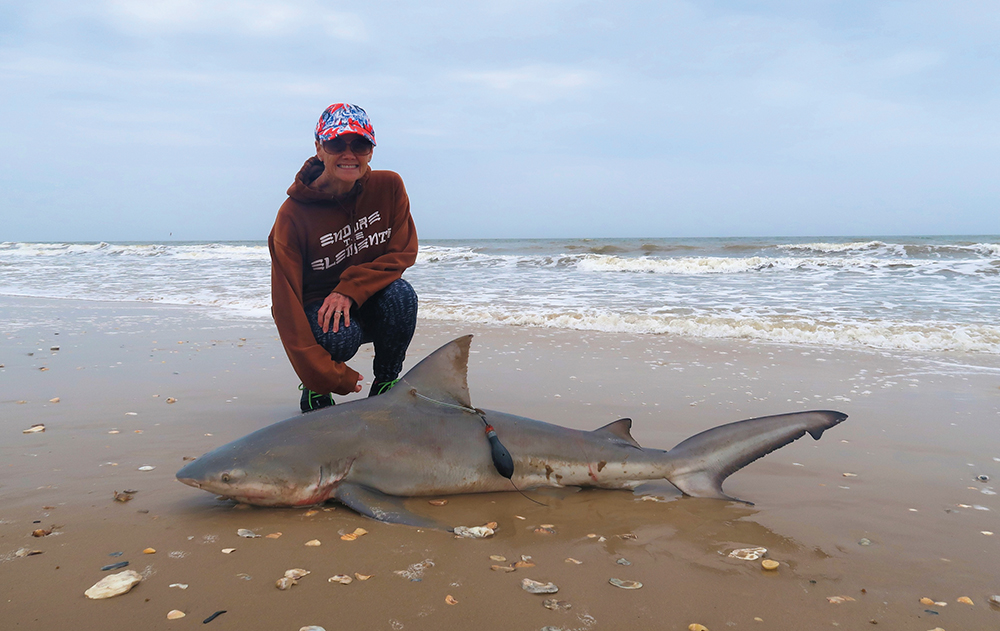 Wanda Ulseth of Minnesota with prized bull shark about to be released with PSAT tag.

The lifestyle of a popular fishing guide presents plenty of perks. Perhaps the most enjoyable bonus is crossing paths with so many interesting people. Driving two or three hours to and from our destination every trip allows me to learn many things about my clients, some of whom look like “average Joes”, but are far from boring and typical.  While I drive and we talk, I hear their stories, and mostly, we bond over time, often becoming good friends, repeatedly doing trips, year after year. Over the course of the past few years, I've met many intriguing individuals, some with stories which seem perfectly suited for classic movie scripts. A select few now seem less like friends, more like family.

In a typical year, my regulars and some new clients show up in big numbers in spring, one of my busy seasons. Of course, the spring of 2020 was anything but typical.  The emergence of Covid-19 in our lives presented an invisibly destructive force which crippled countries and crushed small businesses. Fishing guides like me took a direct hit as people's travel plans were canceled. However, while practicing strict precautionary measures, I was still doing some limited guiding. Social distancing is effective and necessary in our war against the virus, and I feel it is important to practice it. Fortunately, many of my charters are with people who follow me down the beach in their own 4WD vehicles. Out on the beachfront, I have little fear of infection. The onshore winds and open spaces surely reduce the likelihood of people passing germs and viruses to each other.

In the days immediately prior to the emergence of the virus and the chaos it brought, one of my regular clients contacted me saying he and his wife had arrived in Texas for their annual two-month vacation. They'd set up a couple charters far in advance, but we'd left the dates pending and they were wanting me to contact them when we had a good window of opportunity, if I wasn't already booked. These long-married great-grandparents from Grand Rapids, Minnesota, Ron and Wanda Ulseth, have been on trips with me every spring for several years. They're among the most delightful people I ever met and have taken my wife Alexis and me under their wings, treating us like family. Our fishing adventures are always a blast, and I look forward to each one!

In mid-March, we decided to venture to a new location on the Upper Coast to give them a new experience. With some driving time to our destination, they entertained me with several of their stories, as usual. Many revolved around their family, some around their friends, others involving their interesting takes on current events. After some Yankee nostalgia, we reached our destination and drove the debris-ridden beach until we found a good spot to set up camp for the night, then wasted no time before starting to fish.  Early on, action was random—from sharks picking up baits to an abundance of sheepshead, we were in the fish.

Early that afternoon, Wanda hooked a shark, quickly winning her battle and bringing it in. To our surprise, she had an early-season bull shark. We were targeting the more common sandbar sharks, but were happy with the bull, since I had a tag I needed to deploy in a member of the species. The PSAT (pop-up satellite archival tag) was one of four recently issued to me by the Harte Research Institute to enhance their studies of bull sharks. While Ron and I inserted the tag, Wanda was stoked to watch the process. We caught plenty of other species that day, but the shark action fell quiet until late that night, when Ron landed a decent sandbar shark, just the one we were looking for. We fished for a bit that next morning, until a strong north wind blew us off the beach.

Just over a week later, another weather window presented itself. I called Ron and told him the warm conditions meant we should fish our normal stomping grounds on Padre Island. Wanda stayed at the condo to relax, and Ron and I shared the adventure without her. We made the drive a good ways down south to find some clear water. Waves in the surf were stacked, but it wasn't terribly rough. Once again, we wasted no time getting baits out. It didn't take long for things to happen. Soon Ron, the iron man, jumped up on the rack to begin battle with a strong shark.

At the time, I was taking baits out past the third bar to the color change. This shark hit and swam the bars, like some of the larger sharks are known to do. Like a gladiator, Ron prevailed in due time and beached the shark. How fitting it was for Ron to land a perfect bull to carry a tag. This shark was a healthy male, likely just reaching maturity. At seven feet, five inches, it was on par with his bulls from the previous year and possibly his heaviest shark to date. We deployed another PSAT tag and released the shark alive and well. The action continued strong, and we didn't do much resting for the remainder of the day. Almost instantly, Ron hooked a mature, pregnant blacktip. We got some photos and sent her back on her way.

In the next hour, some interesting events unfolded. We put baits back out, and in no time Ron hooked another nice shark. The massive fish stripped line off the reel at will. While Ron did what he could to recover some, another rod went off. Ron stayed with his fish, while I jumped on the other rod to prevent us making a tangled mess of the lines. For a while, things seemed to go well. Ron had most of his line back in when he suddenly felt a jolt. He thought he had lost the fish, so I told him to continue reeling and bring everything in. When Ron retrieved all the line, we noticed something odd—a shark had eaten the large whiting we used for bait, and another much larger shark then ate the first one. All we had left was a shark's head! This likely indicated deadly bull shark warfare.

A few minutes later, near the first sandbar, my fish realized it was hooked and put up a stubborn fight, like a UFO-sized stingray. We had just about convinced ourselves we had a ray, until we got the fish onto the bar. When I realized it was a big bull, I hopped down and grabbed the leader. The girthy female measured eight feet, seven inches—another great candidate for a PSAT tag. We conducted the tagging, which seemed routine by then. I got her back in the water, swimming up-current, and she cruised back into the deeper waters off Padre Island. Without wasting time, we put baits back out and continued fishing, landing no more bulls, but eleven other sharks, averaging about five and a half feet each. For a guy in his mid-seventies, Ron is the ultimate outdoorsman; he lives for this type of adventure. This may be one of the main reasons we bond so well.

We concluded the trip early the next day, after landing a couple more sharks. Ron added another epic trip to his resume. On the drive back to civilization, we had our regular chats about life, fishing, and adventure. We talked about many of the things he and his wife had endured in their long lives and how this virus was simply another obstacle for them to overcome. The reality set back in as we drove off the beach and listened to the news; we felt blessed and fortunate to have made our trips.

I'm very thankful for great folks like the Ulseths, and for the stories they and many of my other clients share with me. The joy in life is partly built around sharing your own stories; it also comes from listening to the awe-inspiring tales of the experiences of others.