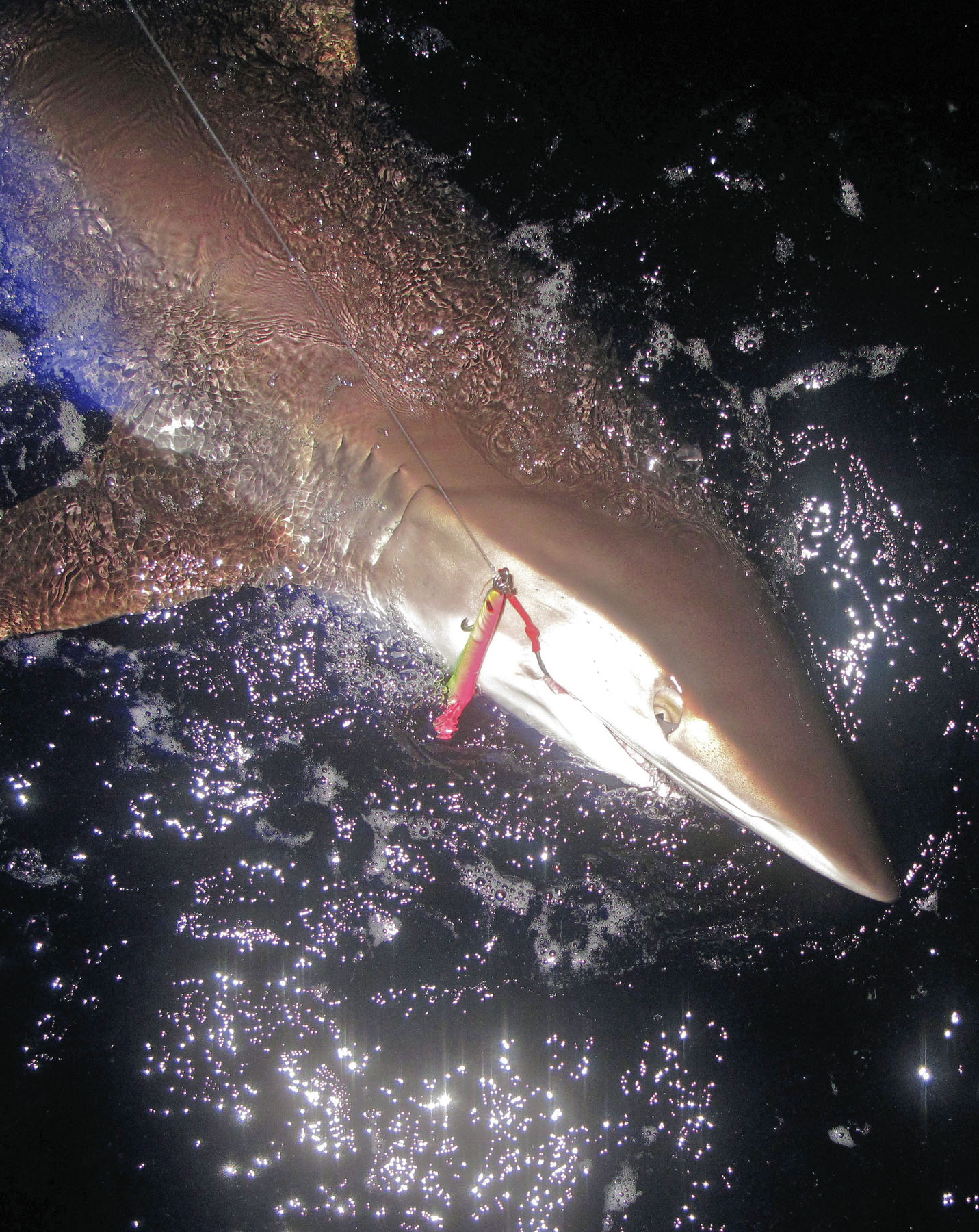 This silky hit one of our tuna and ended up hooked!
The allure of shark fishing from South Texas beaches is heightened through a magically thin sliver of a chance to land a rare and exotic specimen. Lost or perhaps roaming creatures mysteriously appear from the vast biological network of which our nearshore Gulf is a part; like dusky and mako sharks, that I and a few fortunate others have been so lucky to land from the sand. The presence and landings of species that are simply not supposed to be there will probably never be explained, but one fact is certain the chance to encounter firsthand the unexpected and unexplainable will always be the supreme "kap-pow" factor of the sport we love so dearly.

Most everybody that knows me or follows my website and blogs already understands the majority of my adventures occur within or close to the surf-zone. Still, my curiosities will at times lead me far offshore if opportunity presents itself. Many miles from land, where makos hunt down bonito and tuna, the dark depths of the open ocean hide the masterpiece of nature - the thresher shark. It is also here where you find the enormously delicate and docile whale shark the largest of all the world's shark species. And just like clockwork, around deepwater shrimp boats, daily culling of the catch can trigger insane feeding frenzies of massive schools of silky, dusky, and occasionally voracious tiger sharks. Even mythical hammerheads of unfathomable size have been photographed on the surface from helicopters bound to and from offshore oil platforms. This is indeed a very special and boundless ecosystem.

I have been making a few trips aboard YT Brown's NYATI sportfisher this summer, as I have been doing off and on for the past eight years. Mostly two to three day outings targeting daytime billfish, the trips also include opportunity for nighttime tuna and swordfish. Having been deemed nocturnal, I look forward to each setting sun aboard NYATI when the sight of deepwater creatures drawn to the tuna lights can be awe inspiring and has allowed me to capture an I.G.F.A. All Tackle World Record for the elusive deepwater escolar species.

Nearly every serious offshore captain is basically against shark fishing or at least purposely provoking/luring of sharks to the boat. It is with good reason too as unstable and sometimes rough conditions can lead to very real safety issues regarding the interaction between man and beast should a crew member find himself overboard. Even YT himself prefers the avoidance of shark fishing on his boat and we abide and respect that notion. However, there have been times when these predatory creatures find US late at night. For me, each sighting in the chilling darkness is an exciting experience regardless of size or species. A particular ghostly night comes to mind when I witnessed mature silky sharks DEVOURING other smaller sharks right in front of me. Try to beat that for an adrenaline rush! For most, sharks are a nuisance. For me, sharks are an obsession.

At well over 100 miles offshore in mile deep cobalt water, it is routine for the crew of NYATI to engage in tuna fishing at night. Only after we are done trolling for the day and the boat is resting adrift can we target the highly-prized yellowfin tuna. Methods can vary from throwing large topwaters, dropping erratically moving jigs, and sometimes live-baiting with flying fish. Another method that is often productive if the others are slow is chumming and fishing with cut baits. However, chumming can sometimes bring in larger predators. Out at those great depths, there are not usually a wide variety of shark species present, but the ones we see are notable. My first-ever sight of a dusky shark was caught aboard NYATI years ago by my good friend Scott Nelson while tuna fishing. That 8-footer was wearing pieces of netting (possibly from a shrimper or even worse, a gillnet) wrapped around the gill and head section and the fabric had started to slice into its thick skin. We managed to cut the mess free and release the shark, possibly saving it's life.

Another species that have occasionally graced the lights with their presence are the makos. Streamlined to perfection, the fastest swimming of all sharks, makos are evolved over millions of years to become nature's perfect aquatic predator. During a heavily wind-chopped night while tuna fishing several years ago, we had a couple makos make an appearance in the lights. Without thinking, I pretty much hand-fed an 8-footer a baited hook at the stern. I watched as it swam down, only to resurface after I engaged the reel. When it came back up it actually breached and nearly hit one of the outriggers. Close call and lesson learned. After a while I had the shark back to the boat and we had a safe and successful release. Makos are among the coolest of sharks that exist but are also some of the most unpredictable and most dangerous. Considering their reputation, each offshore mako sighting is pure coolness.

On one of our recent adventures we came across a school of silky sharks. Silky sharks are a pelagic species, and while sharks of any species are not generally abundant this far out, we see silky sharks rather frequently beginning at depths of 100' and on out to the drop-off of the shelf. On the night we found the silky school we were chumming/tuna fishing and hooked what surely didn't seem like a tuna. After a lengthy battle and the miracle of the fluorocarbon leader holding up, we got in an 8 to 9 foot silky. After the quick release it returned to the light field bringing four of its buddies. Needless to say this immediately shut off our tuna fishing and, while we tried to escape the pack, they would find us again in a short time. By then we knew it was a lost cause and decided to treat them to the rest of our chum, a decision that set up an incredible photo and video session.

Swordfishing at night is an entirely different ballgame. We have lost many baits to sharks and we have also landed some as well. To do battle for over an hour, convinced it is a swordfish, only to bring it to the surface and see that it is a large scalloped hammerhead, is an odd feeling. Depending on the angler it could be a good or bad feeling, however, there are times when you get surprised by a true gem like a pair of encounters with oceanic whitetips. Once again Scott caught one, and I too have landed one, both while seeking tuna at different deepwater locations. For us, these whitetips are the rarest of the sharks we've encountered. At one time they were a globally abundant species and now have a population decimated to nothing. While they still patrol the deep, scavenging on about anything, any sighting nowadays in the Gulf of Mexico is deemed pretty rare.

Sharks play a highly important role in balancing the ocean's ecosystem. Due to the massive slaying of these fine fish by way of illegal finning or gill-netting, most species' populations are at the lowest point they have ever been in the Gulf. We do not keep sharks aboard NYATI, and in the event we do land one, it is released as quickly as possible and we strongly encourage others to release as well. While sometimes frustrating when sharks show up to your party; it should also be treated as a welcome sight. Even if I am targeting other fish and the end result is a shark, even though I might be frustrated at first, I really do appreciate the encounter. It is very possible that the world's shark populations will never rebound to what they once were. This fact alone should alert you to how vitally important their role in the ecosystem truly is and should also heighten your awareness of how wonderful and magnificent they really are.