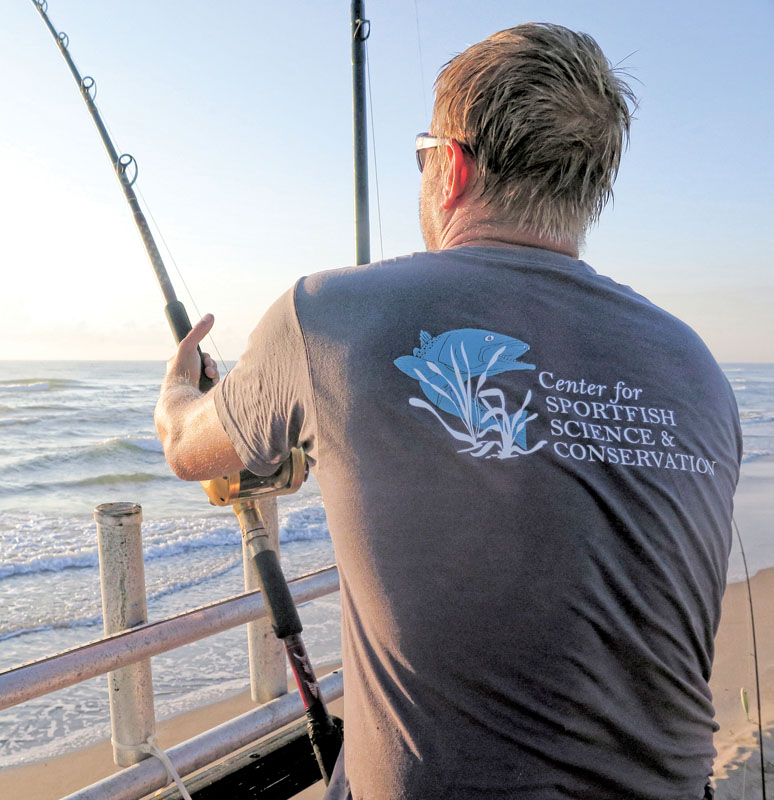 Oz fights a bull shark at sunrise from atop his beach truck.

There is no place quite like a calm autumn beach. The crowds of summer are greatly diminished with school back in session. Dove and archery deer seasons draw beach anglers to other outdoor pursuits. Comfortably cool October mornings are relished by diehards who would rather fish.

The changing of the seasons is evident everywhere and the annual mullet migration is the catalyst that triggers insane surf fishing. The surf zone attracts predators large and small; bluefish, trout, and Spanish mackerel blaze through rafts of baitfish, gorging on anything they can swallow. Swarms of feisty jack crevalle trap hapless baitfish against the sand. Yet there are two predators above all associated with October on the beach bull reds and bull sharks.

Mullet are a staple in the diet of red drum. You might not truly appreciate this until you witness a school of bull reds wreaking havoc in the shallows. The reds will at times chase mullet right up on the sand, stranding themselves and their prey, until a wave arrives and rescues them back to the safety of the water. The mullet are coming out of the various passes and channels leading from the bays to the gulf. Many predators, including redfish, stage in these migration corridors and basically indulge in an all-you-can-eat buffet while it lasts. Predators then dog the mullet trains as they eventually arrive in the surf zone. Depending on their size, red drum may consume more than a dozen mullet a day and the bull reds seem to gorge non-stop. Once in the surf the redfish become pack hunters and are very efficient, working together like wolves to corner and ambush prey. It is no wonder that anglers become addicted.

The kickoff to this activity traditionally occurs earliest on the upper coast, following the arrival of the first cold fronts. Targeting reds in the surf can be as simple as netting up fresh mullet and setting out bottom rigs. Six-inch "finger" mullet are widely popular but even larger "horse" mullet are consumed by bull reds. Areas such as High Island and Matagorda are usually shrouded in murkier water but this low-vis situation actually creates a feeding oasis for the red drum, making it easier for them to ambush prey. Both live and dead baits are known to produce excellent results.

In contrast, the surf zone along the southern Texas coast is famous for greater water clarity and at times you can see schools of slot reds traveling the first gut. And while the bottom-rig method certainly works down here, the greatest thrill is sight-fishing with lures. The age-old redfish killer in the Padre surf has long been the gold spoon, but do not rule out other lures. Soft plastics are usually equally effective and topwater explosions are beyond exciting.

Thanks to conservative resource management practices, our coast holds some of the largest redfish populations on the planet. Not only can you encounter large quantities of slot-sized reds, you also have the chance at some true Texas brutes. Bull redfish in excess of fifty inches and as many pounds are caught during October and these Goliaths are known to take baits as large as whole whiting rigged for shark. In fact, the numbers of oversized red drum in the surf may be so extreme, it is virtually impossible to get small shark baits past them.

For whatever reason, the upper-coast seems to produce unusual numbers of multi-spotted reds. While reds normally have only one spot per side near the tail, we have caught bulls up there dotted with as many as one hundred individual markings. This time of year I have many family charters with kids. It is times like these when I can readily put a child on a fish of a lifetime and see them grin from ear to ear the whole trip. Seeing the kids participate and react like it is Christmas makes me tingle as I know I am providing a "healthy" addiction for an adolescent.

Shadowing the endless schools of red drum cruising the surf we find the undisputed king of bulls - the bull shark. The wide variety of prey available attracts them in uncommon numbers. Since bulls are not the fastest of predatory sharks, the high concentration of food in the surf works to their advantage. Typically scavengers, they are quick to clean up scraps as well as grab any slower-moving injured fish, regardless of size. I have witnessed and made underwater video of bull sharks weighing up to three hundred pounds slowly creeping toward a ball of anchovies and simply swimming through with their mouth open. This may be the easiest and most efficient way for them to stock up on pure protein, I would imagine. Bull sharks will run at practically any depth pursuing food and countless anglers have been chased off the first sandbar throwing lures for other species. While accidents with sharks rarely occur in Texas, it is important to be keenly aware of your surroundings.

Maybe it has been the lack of sargassum allowing anglers to log more productive hours the past two years, but whatever, the Texas coast has yielded some of the largest bull sharks seen in our area in decades. We released a potential state record fish on a charter earlier in the year with a fair share of eight-foot toads thrown in the mix. October and November are the prime bull shark months along the coastal bend. Due to their size and temper, shark anglers take to the sand seeking bulls often with great success. Like the bull reds, the bull sharks can be so thick in numbers that they will annihilate large tiger shark baits before the tigers even have a chance to find them. The vast majority of these bulls will be running around 6-feet, with fish anywhere between four and eight feet being caught. While the "no bait is too big" philosophy runs true with the bulls during this season, it is not uncommon to have a five-footer suck down a finger mullet on a casted bait. If the leader holds up and the reel doesn't get stripped, these sharks are incredibly fun to catch on medium-class tackle.

The "bulls" truly dominate the fall surf. If the mullet are running, undoubtedly the predators are in tow. This is such a fun time of the year to fish because fishing is as easy as it gets. The fish are hungry and the fish are feeding in great numbers, a combination that dreams are made of. Some anglers will be taking to the muddy waters of High Island where they may land upwards of twenty bull reds a day. Other anglers (self-included) will take to the south Texas surf in search of toothy creatures. Regardless of which decision you choose, you are in for more of a treat than a trick this Halloween season.

If conditions are suitable, you may even have your chance at breaking the Texas state fly-fishing record for red drum, with your best shot likely around a jetty or other structure. In regards to sharks, no matter the size of the bull shark you catch, it is highly recommended that you release these fish. With the huge decline in overall shark numbers in the gulf the past couple decades, each and every predatory shark takes on an important role in the balance of the ecosystem. However, if properly conducted, you can land and safely release these sharks while getting some incredible photos. So go out, be responsible, and have a heck of a time this fall fishing season!