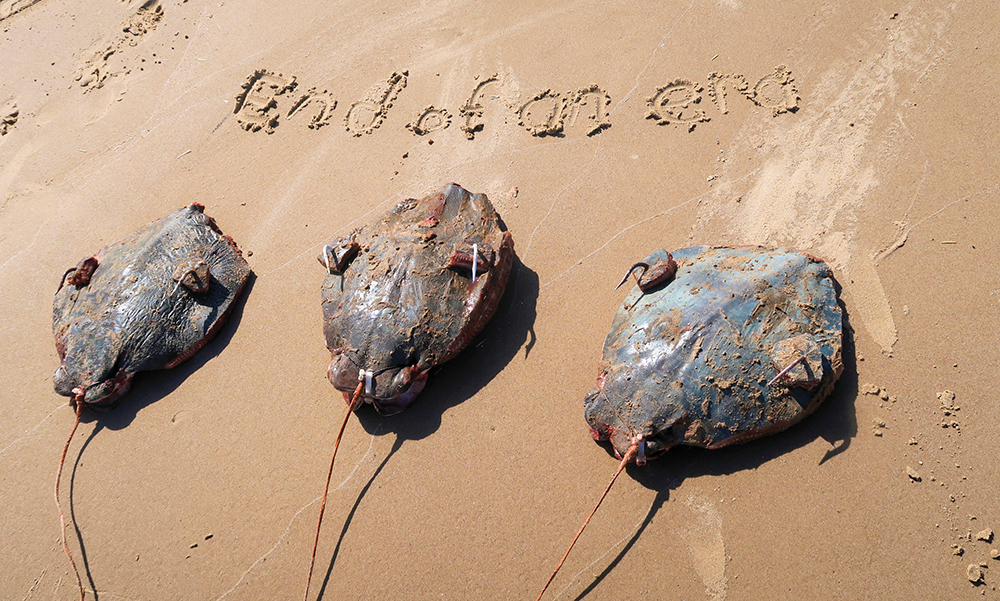 I have mentioned several times in this column the evolution of land-based shark fishing over the past couple of decades. Technological advances have boosted tackle and gear way beyond what hardcore anglers of the 1980s and 90s could have imagined. One constant that remained over time, though, is the addictive interaction between man and beast.

This is what sucked me down the beachfront rabbit hole. The same reason my life revolves around marine forecasts, bait migrations, and seasonal changes. Shark fishing is my life. For the past twenty years I have done all possible to help optimize the efficiency and productivity of my fishing. Whether devising new methods and techniques or experimenting with new baits, my zeal has never wavered. Many years from now,  when I am a salty old man, I expect to be driven by the same passion. Still at the water’s edge, tangling with the apex predators of the deep.

Earlier this year Texas Parks and Wildlife dropped a bombshell on the sharking community with the announcement of new regulations. Effective September 1, 2019, shark anglers are required to use ONLY non-offset, non-stainless steel, circle hooks. This is huge for several reasons.

First off, for as long as man has fished for sharks they have used traditional J-hooks in shark baits. The reason has always been the hookup ratio. J-hooks lend handily to the streamlining of large baits – whole or large pieces of jackfish and stingray – the premier bait for targeting species such as large tiger sharks. While you can catch tigers and other large sharks on big circle hooks, rigging for them is quite different and when not done properly is not as efficient.

Another source of frustration is the banning of stainless steel hooks. Many anglers converted to the use of single stainless circle hooks in the rigging of smaller baits years before the new law, for the reason that stainless steel resists corrosion and remains razor sharp even if soaked for days at a time. But we can no longer use stainless.

And then there’s the elimination of the offset. Anglers already using circle hooks relied mostly on the offset variety to widen the gap between the point and shank to promote the hookup ratio on big sharks. The typical circle hook design is meant to have the fish eat the bait, then with resistance, the bait pulls out of the mouth and the hook catches on the corner of the jaw. Offset circle hooks have little to no effect on hookup ratio unless the gap is too small for the shark you are targeting. However, back to J-hooks, it was also a common practice among shark anglers to purposely offset the hook point just slightly to achieve more hookups. But all that is water under the bridge. We can no longer use offset hooks of any type. A mainstay in the sharker's tackle box for decades is no longer part of the angler’s arsenal as we enter a new era.

Now, with all those bases covered, let's talk about the impact and reasoning. I am part of a very large and growing sharking community. I know many individuals who share the same passion and social media keeps us all in the loop. With the announcement of these regulatory changes, I would have to say the vast majority of anglers are unhappy. They want to use their J-hooks in big baits and they want to use stainless so they don't have to buy new hooks every other trip.

Let’s back up to the reasoning behind the regulation. This gets a little tricky. Above all, it was intended to reduce shark mortality. It is no secret that on occasion, certainly not as common as some might think, the shark (if large enough) might get gut hooked. If this happens the shark will likely die before it can be released. With the popularity of land-based shark fishing booming, scores of photos popping on social media seemed to indicate an alarming number of dead sharks presented by novice anglers. Reality is quite different, though. Out of perhaps a thousand big shark landings over my twenty-year career, as few as a half dozen have failed to survive and be released successfully due to injury from stainless steel offset J-hooks. I call that a remarkably low number.

More than the type of hook, I firmly believe it’s all about efficiency during landing, handling, and releasing. The biggest problem is that anglers who've never caught a big shark are almost in shock when they get it to the beach. While some mortality might be traceable to the J-hook, a more likely cause is the angler spending too much time making photos and taking measurements.

But sharks do die unintentionally, and while the numbers are very small, this is what TPWD aims to reduce. Still, I do not see the new hook regulations as a silver bullet. Consider the great hammerhead, the speed demons of the ocean. I do not understand how the regulatory change will contribute anything.

We cannot predict which shark species will pick up a bait and large hammers are notorious for exhausting themselves nearly to the point of death during the fight – which has absolutely nothing to do with the hook being used. In fact, despite their great size, their mouths are quite small compared to tigers and bulls, and they commonly take small baits. So, the irony in this regulation is that a lot of the hammerheads that failed to survive and caused a mainstream uproar were actually caught on circle hooks.

My personal feelings? While I have explained how many others interpret the new regs, I am honestly very neutral. For two years now, nearly all my sharks longer than ten feet have been caught on the recently mandated non-offset circle hook.

I own a shark tackle company, Catch Sharks (catchsharks.com), and the greater majority of the shark leaders I have sold were built with non-offset circles. I coat hooks  with Tru-Sand technology to help blend in with the ocean floor. Even though I also sold stainless circles and Js, most of my business revolves around hooks coated with Tru-Sand that are currently legal. I firmly believe you can catch giant sharks on these hooks. Case in point is the fourteen-foot great hammer landed last year by Ray Cedillo. The largest shark from a Texas beach in more than two decades.

While I understand the “hopes” behind the regulatory changes I cannot say I approve. Yes, a line may break and a stainless hook could remain in a shark’s mouth for a long time, whereas a hook of plain steel will dissolve fairly quickly. I also understand the gut-hooking issue related to offset hooks. But as I said earlier, the chances of this happening are really rather rare.

Unfortunately, out of all the sharks being tagged and released by hundreds and hundreds of conservation-minded Texas shark anglers, it is only the rare case of the few giant non-surviving specimens on social media that has promoted so much controversy. While the exact number of big sharks failing to survive release due to a specific hook type will never be known, it would definitely be only a tiny fraction that were once intentionally slain merely for their jaws.

My personal feeling is if Texas Parks and Wildlife really wants to protect the shark population, then perhaps they should work more closely with the feds and focus their efforts on shrimpers off our coast who are illegally finning sharks. Shrimpers are selling shark fins on the black market and making far more money than they are from shrimp. Direct intel from a federal game warden source indicates the numbers of sharks illegally taken right off our coast are staggering.

Taking this line of thinking even further, Texas Parks and Wildlife should invest more effort and work together even more with the feds to patrol and curtail illegal longlining and gillnetting by Mexican fishermen in our waters. While I do understand state game wardens already try to enforce these laws, more so closer to the border, it just seems that for the sake of shark numbers they should concentrate greater effort on illegal activity versus the miniscule number of sharks killed unintentionally by recreational anglers conducting catch and release shark fishing.