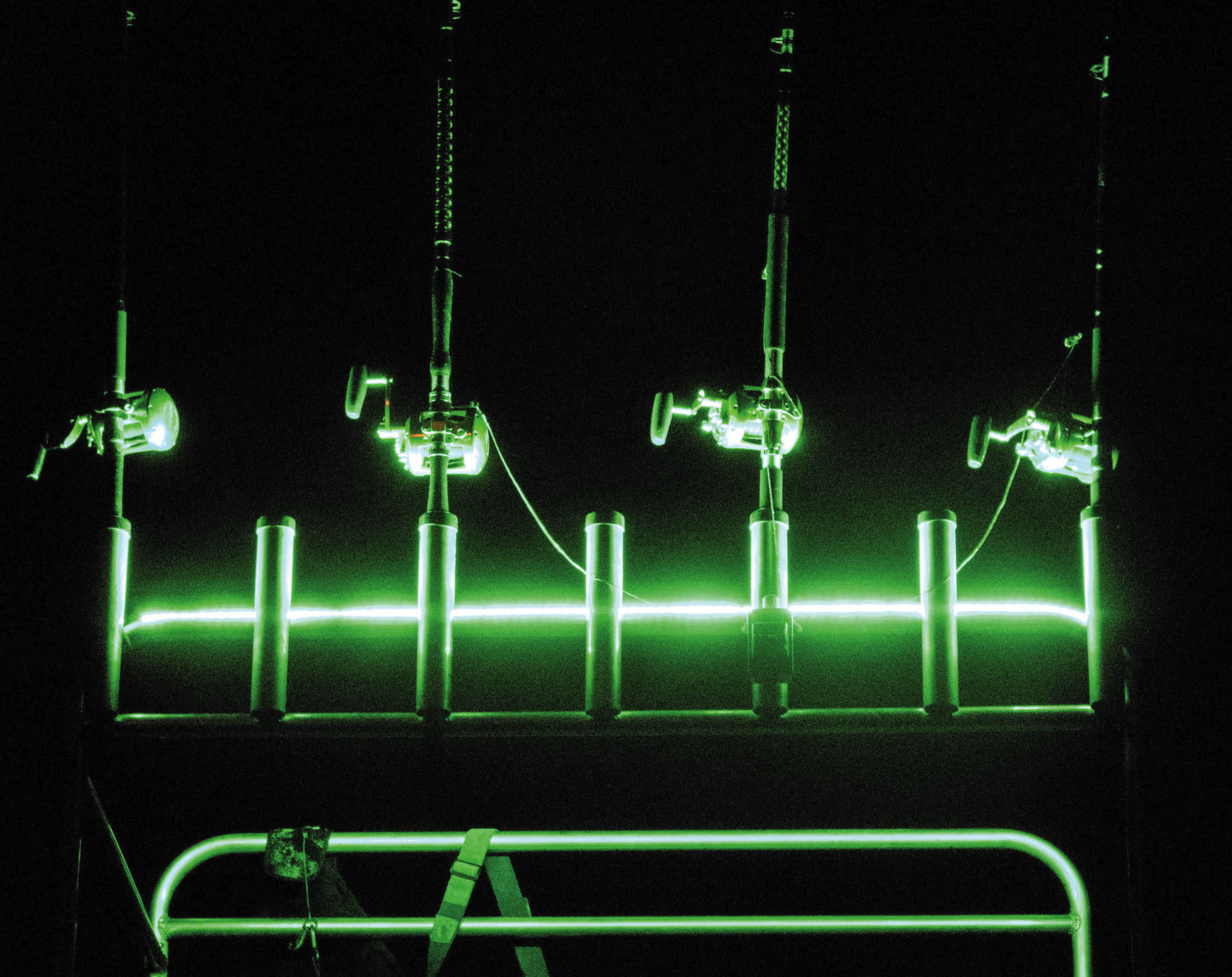 Oz’s beach truck – lit up and ready for action.
For more than a decade I have spent countless nights on the desolate Padre Island National Seashore in search of the gulf's greatest predators - sharks. Among these outings, a percentage were either spent fending off torturous mosquitoes, clearing sargassum from the lines, or keeping warm on frigid winter nights. While this all sounds rather dreadful, the truth is, I wouldn't trade my experiences for anything. The rewards of maintaining the lines throughout the night or putting up with nature's other obstacles were well worth it on many occasions. By choice, I have spent a great majority of trips in complete solitude. After you have been in my position landing sharks in excess of ten feet AND releasing them by yourself, only then will you understand why. It is the personal and spiritualistic encounter with nature that sustains my thirst for adventure. With that being said, I am happy and proud to announce that I have finally reached a point in my life to evolve and share these experiences with the rest of the world.

As of September 1, I have been guiding authorized charters (via my company - Ocean Epics) on the Padre Island National Seashore in search of these great apex predators with those eager to take part. This has been a long time coming and a decision heavily encouraged by my mentor, Capt. Billy Sandifer, who is now retired from his surf fishing business.

The majority of my charters will be shark-based, with emphasis on tagging and releasing all specimens possible for the clients. With tagged sharks, if a specimen is recaptured in the future, the individual will be notified and informed about the growth and location of their fish. Every angler on a charter that is responsible for releasing a tagged shark is in essence helping assist valuable scientific research. This is a great unique benefit for the angler not seen on most other charters. For nearly everyone, a great angler photo of their catch in addition to the individual's scientific data being supplied is far more self-gratifying than a dead rotting shark and set of warped jaws. In the event that an angler's tagged shark is recaptured, the info provided and confirmation that the fish has been alive and well in the gulf (or beyond) is simply priceless.

Coming up in October and November, we are approaching a great time for surf fishing along the Texas coast. Gamefish and sharks are in hot pursuit of the mass quantities of bait stacked up along the beaches. Every part of the food chain is present and active during this pinnacle period. In addition, the cooler weather presents a comfortable atmosphere for the beach. I will be accepting and conducting charters as often as I can during this period to take advantage of the phenomenal conditions and red-hot bite. Come December and January when conditions allow, I will be conducting trips in search of large winter sandbar sharks. These are a large, worthy seasonal shark which have never really been sought after until recent years with the discovery of this great fishery and angling technology to catch them from the surf (i.e. kayaks). Sandbar sharks are pretty much massive mutated blacktip sharks on crack and provide a very exciting battle for the angler.

So you ask, what is the reason behind my decision to become a guide? I guess to start off with, it was more or less inevitable. As for timing, right now the planets and their unrelated metaphoric meaning have finally managed to line up for me. Everyone knew it was bound to happen, but when? I would like to say I was ready this whole time, but the truth is rather different. I had to be patient and wait until the proper opportunity. As Sandifer was retiring, he tried relentlessly to get me to join him as a protg. While I was enthusiastic, I knew the time still wasn't quite right. It was only until recently after I endured and dealt with personal issues that an avenue opened up and I knew for a fact I was finally ready. There are a great many people that supported and helped me make this venture possible and I owe them all a huge thanks.

Despite a new era, my feelings have always been the same. In the end, it is not about the selfish superb catches that even I have grown accustomed to, but more of a progression in sharing the experience and enlightening other's lives and quest for adventure. While I have almost exclusively fished for myself over the years, I have at times participated in sharing the moments with others. To see someone's eyes glow as big and bright as the full moon with a matching smile really make the effort very worthwhile for me. I really look forward to going on this fantastic journey with countless new faces and providing a memory for them that will last forever. For anyone interested in obtaining a charter, you may visit my website www.oceanepics.com for more info. Scheduling is very random at this time and I could be available a week from now on a certain day, or be booked for a weekend four months in advance, so please don't hesitate to contact for availability. I can't wait to include you on this great ride!

In other news, there was a great turnout for the 2013 Bluewater Kayak Classic. Kevin Kieschnick did an impressive job handling the event for the 100+ kayakers who participated. There were many great fish caught, including one of the first non-mothership kayaked-billfish from Texas. Travis Sadler made news when he was fortunate to land and release a large sailfish from the kayak. I too participated in the event for the first time ever and was blessed with two massive king mackerel. Grand 44 and 48 pound beasts helped earn me first place with their combined total. There were also divisions for snapper, cobia, and Spanish mackerel. With the ideal weather conditions, many respectable fish were weighed-in. This has been a growing tournament over the years and with the explosion in interest of kayak fishing, it will only get larger. I look forward to seeing everyone at next year's event!