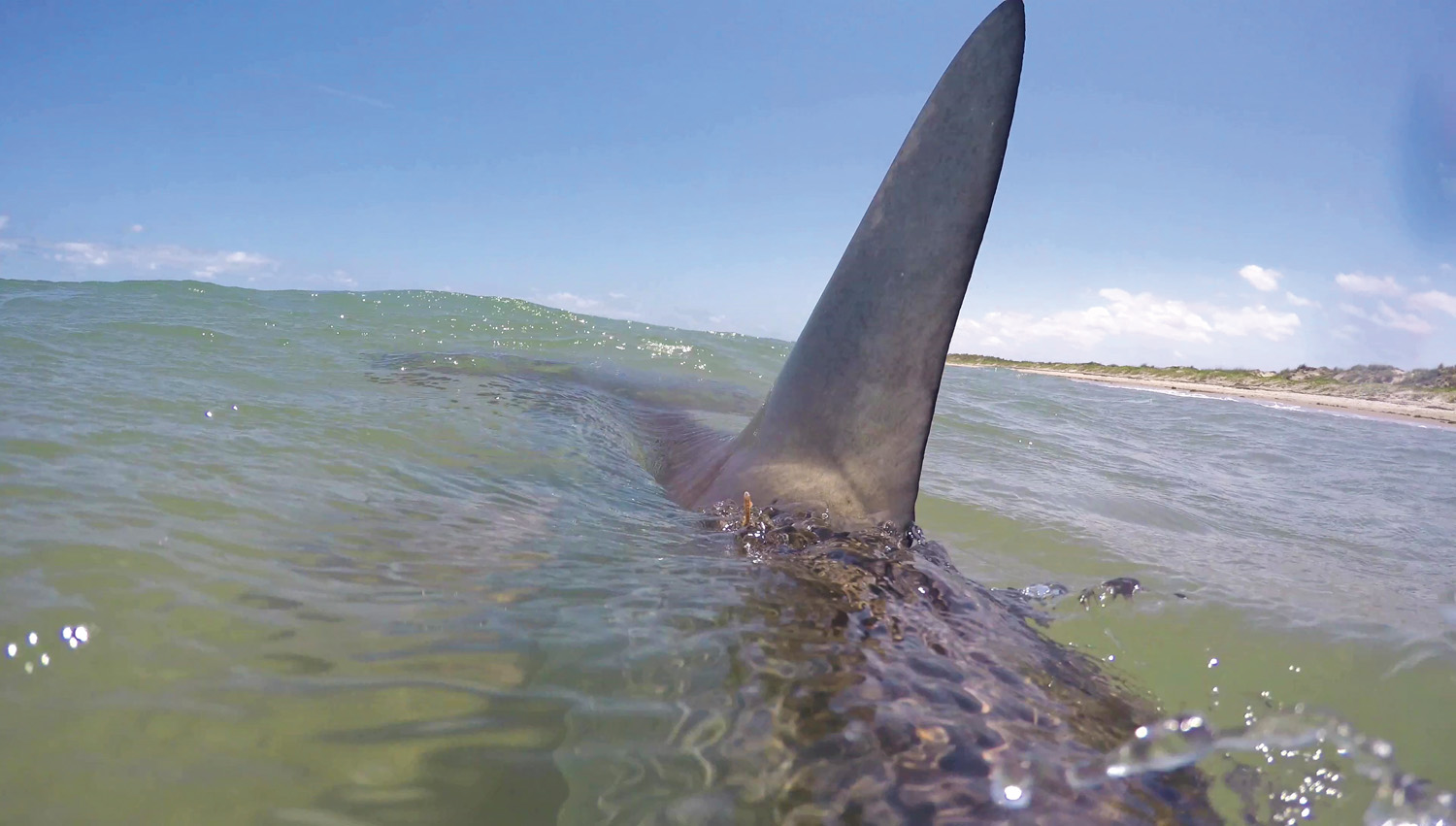 One of our scalloped hammers last spring, tagged and released, making its way back home.

Relentless, bone-chilling, and frustrating accurately describe the wrath the 2017-2018 winter has wreaked on surf fishing. At its peak impact, surf temps along the upper coast dipped into the mid-40s. Along the south Texas coast, water temperatures remained in the 50s for well over a month. These extremes pushed most of our surf species offshore into deeper, warmer water. In the shallower bays, many fish could not escape the cold onslaught, and fish-kills ranging from a few mullet to piles of sow trout were seen in several locales.

Fish that did manage to flee to deeper and warmer channels were able to take advantage of cold-stunned prey. On the back side of Padre Island, this has been my best trophy trout winter in perhaps a decade, releasing some behemoth specimens. Ironically, redfish and black drum are species that thrive in these coldwater conditions. As expected, they schooled in great numbers, devouring everything in their paths. Despite so much death due to Mother Nature's winter rage, various areas of Texas bays and inshore waters were teeming with life. Now, with winter over, we begin the exciting transition into spring and my transition back to the Padre surf.

I have great expectations of a massive influx of fish storming back into the surf zone. If certain conditions will align, spring offers one of my favorite times on the beach. Virtually anything is possible, from early-arriving king mackerel and cobia to monster makos.

With the lackluster fall showing the jack crevalle made, they may well show in full force as the surf waters warm in March. When everything falls into place we can be blessed with everything from pompano to large sharks during early-spring. My charter schedule starts to get busy and there is plenty of chaotic action for everyone to enjoy.

Some of my most exciting charter outings have occurred during spring, putting kids on multiple shark landings, jacks, and reds – all on the same trip. We are lucky too, that sargassum is not usually a problem in March, typically not until sometime in April. I am personally stoked with anticipation of great action, and in this I have a few strategic surprises of my own.

Because of such a long, harsh winter, opportunities on the water were not readily available as one would have liked. With all this unallocated time, I began brainstorming. After recently acquiring the Catch Sharks terminal tackle and leader business, I immediately revamped and essentially re-invented the company. Transferring the original pioneering concepts to new products was a challenge, yet quite fun. I have been creating new products that I believe have potential to change the game for land-based shark and surf fishing. With only a small handful of original concept leaders at the start, I have expanded the line to include dozens of precisely-crafted specialty leaders.

Everything from glow-in-the-dark themed hooks/rigs, to true “blackout” rigs, ideal for nighttime. I have added all-cable leaders for foolproof monster systems, and other items have been treated cosmetically for style and “cool.” After playing around for months with different designs, I began to focus on aspects of strategic advantage. My intent was to create unique products that I felt were essential and had never been done before.

Just in time for the madness about to take place in the surf, I finalized a new line of strategic shark leaders I call the Incognito Series. I included the fundamentals of efficient shark leader design and integrated a new scientific aspect. The result was a near totally camouflage (under water) and electromagnetically undetectable shark leader. The manufacturing process employs ED coating (Electroreception Deception™), an environmentally-friendly polyester-based coating. This durable coating provides an attractive, corrosion resistant finish without the use of solvents or heavy metals and provides insulating properties up to 1000 volts per mil.

Sharks use electroreception to detect minimally fluctuating pulses of magnetic energy to detect live or struggling prey. Our theory is to mask as much of the unnatural magnetic field of the metallic components as possible. I dubbed the look of the new coating Tru-Sand™. Tru-Sand™ very closely mimics the look of actual sand, down to the individual grains. With spring upon us, I will be putting a great deal of effort into testing these innovative leaders.

With sharks being the major focus of my personal and charter time on the beach, the arrival of spring opens many avenues. If the water trends toward clear, the scalloped hammerhead migration will bring many specimens as shallow as the first gut. Thinking of clear water, the Incognito leaders were designed with these hammers in mind.

Blacktip sharks (most larger females) with be pregnant with pups. They will be hunting the shallows for an easy meal and will be easy to target, even on baits cast from the beach.

On the other end of the spectrum lies the Holy Grail of Texas sharks from the surf - the mako. In the modern era there have been only six publicly documented land-based mako catches in Texas. Of these, I have been present when five were landed, catching two myself. This majestic pelagic species is not only the fastest shark in the ocean but one of the fastest of all fish. The makos are Mother Nature's perfectly engineered predator, closely resembling the great white. Unlike other parts of the US, Texas breeds monsters and our average Texas mako landed to date has measured between 8- and 9-feet. Surf landings have averaged closer to 10-feet. Their power, size, and menacing appearance add to their mystique.

All areas of the Texas coast experience varying activity as regards shark and gamefish abundance. Much depends on currents, water clarity, and temperature. The combinations of these determine the presence of surf zone species, whether pompano, sheepshead, jacks, or little tunny. Putting things in perspective, when we may be catching hammerheads on Mustang and Padre, anglers on the upper coast may be getting into sandbar sharks. Wherever you fish, springtime provides some sort of surf action.

Utilizing fresh baits such as mullet can land you anything from oversized red drum to jacks, and even a stray king mackerel. The pompano bite may remain solid throughout March and, if so, anglers are in for a treat. If you are a hardcore sharker, your absolute best bet is in obtaining a fresh jack in the morning for large or cut bait (award winning Jack Slammer leaders are rockstar approved).

We are fortunate that spring provides us many surprises, and anything is possible. Whether pompano and red drum for table fare or tangling with giant sharks, now is the time to embark on your own memorable adventure!