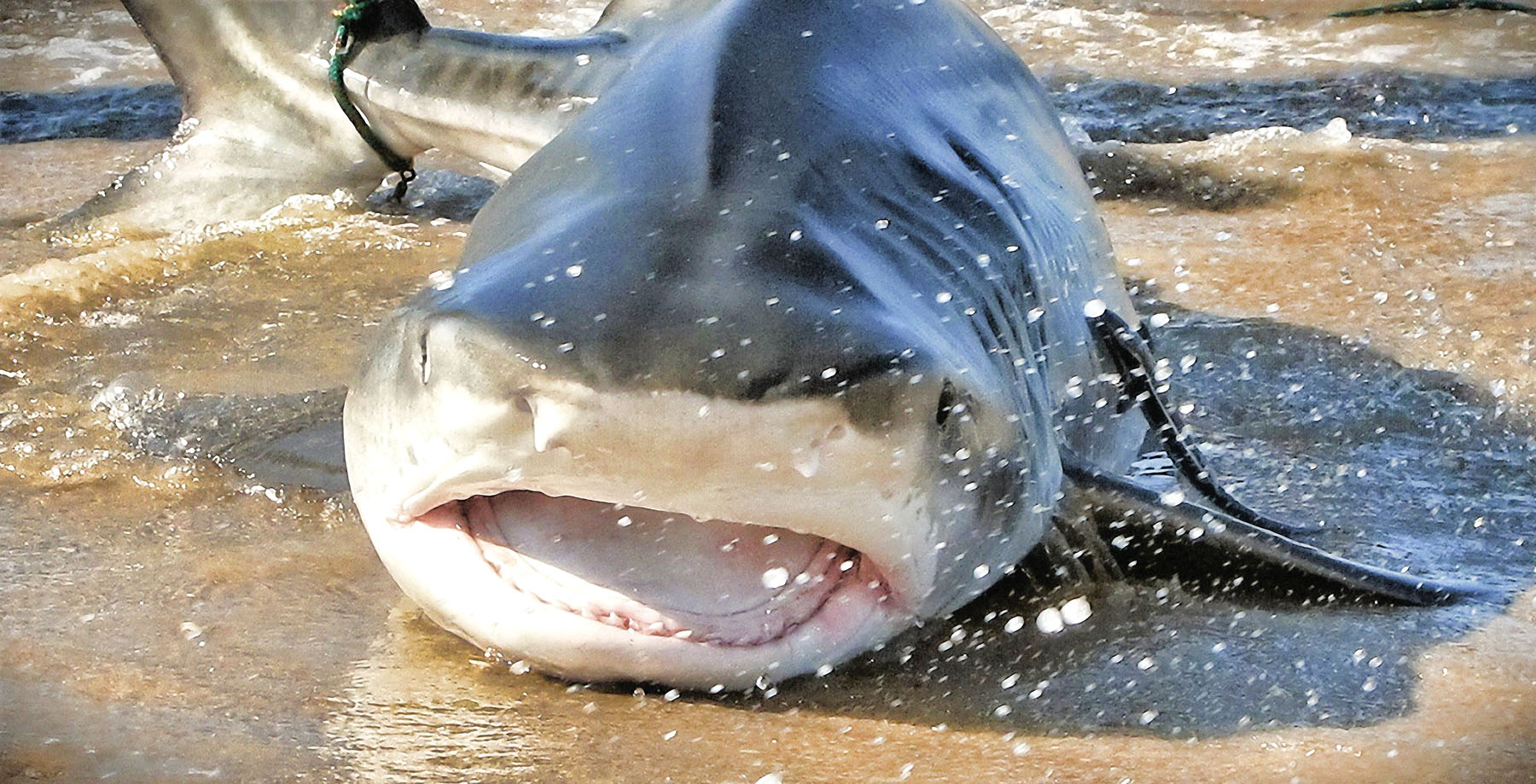 Greatly unexpected Spring Break tiger.
There is little on this green earth more compelling to me than the majestic tiger shark. Capable of exceeding 12 feet and 1000 pounds, tigers are the reason I deploy large baits far beyond the breakers night after night. Their sheer size makes them a fearless apex predator and the ultimate gamefish in the shark category. While tigers can be present along Texas beaches much of the year, November has historically been the month for some of the largest. During late fall they roam the surf amid the feeding frenzies, picking off jack crevalle, oversized red drum, even other medium-sized sharks. How could one not be overwhelmed by the raw abilities of this incredible creature?

As a child I was fascinated with the tiger shark (Galeocerdo cuvier); as an adult I am obsessed. Every shark fisherman, beginner to salty old sharker, dreams daily of their first, or hopefully, next encounter.
Sadly, tigers are not as abundant as they were in the 1960s and 70s. Faded photos document multiple landings per day, giants hanging dead as doornails from Gulf piers, slain wantonly for bragging rights and jaws. Decades of over-fishing and illegal commercial finning greatly diminished their numbers; however, modern conservation enforcement and sport fishing ethic is contributing to a slow but steady rebound. Recreational shark anglers hit the jackpot in 2012 with more landings and releases documented from Texas piers than the previous five years combined.

My own personal encounters with these magnificent beasts is overpowering the soul of the reason I do what I do. Nearly every shark trip I have conducted the past ten years has been based around the chance for a tiger. Beginners have no idea the countless man-hours and work I have invested, and when their time comes, I pray their appreciation for the species will become equal to mine. I am convinced tigers can cast a spell like a devious and ghostly mermaid luring a drunken sailor into the depths. From my very first tiger that I fought for two and a half hours on medium tackle to the unexpected Spring Break specimen, all my tigers have a remarkable story.

Perhaps none of my encounters stand so vividly and surreal as the massive fish I landed one lonesome night three years ago. I was down the Padre Island National Seashore strictly on a shark trip. The plan initially was to set up camp with a buddy but things fell through and I ended up solo. It started with a flat tire and even the weed on the beach had a destructive and ominous appearance. Back underway and continuing south my outlook became more optimistic. I found a good location and the bite was on as I banged out some smaller blacktips. Come sunset I had several "rockstar" baits out and that eerie-lucky feeling seemed to hovering over me. And while most of my tigers have been late night-early morning fish, this one picked up a bait around 9:00PM. Slack in the line led me to think it was a bull at first but I could not have been more wrong.

Studying the rod and the line slacking up, I hopped up on the platform and started to reel in. I caught up and it turned, headed offshore slowly. Hmmm... I let it go for a few seconds and then I hammered a powerful hookset. Yeah baby - game on!

This shark had a ten pound head section of jackfish in its mouth and was dragging a Godzilla weight I knew it had to be a good one. It took line at a slow pace and I had yet to get any back. I began to hear something other then the drag of my reel. Looking behind I noticed the grill and my entire chicken dinner engulfed in a fireball. Ironically this was not the first time it had happened. Being by myself, I chose to continue the battle as my beach chicken lit up the night sky.

After a few minutes I strapped into the 50W reel that had been loaded with braid for greater capacity. It took some time but I eventually slowed the fish and it began a slight turn back toward the beach. She was swimming in, but doing so at her pace, not mine. Several minutes passed and she was over the third sandbar. Only then did the fact that I was by myself set in, and I could only ponder whether I would be able to land and release this fish alone. A few more minutes and the shark was just past the first sandbar. I fought her closer and she freaked out, tail-kicking the surface. Good solid fish!

I put the rod up and flew down off the truck. In a matter of seconds I was on the first bar. The tide was low and I could see the leader and a tail a BIG tail. Before I had even made positive identification I somehow instinctively knew. I grabbed the leader in the midst of the spotlights and my suspicions were confirmed TIGER!

A slight panic set in, having to deal with a fish of this size without help, but I remained calm and worked as fast as I could. The waves had pushed her up along the break just enough to where she was not going anywhere. I grabbed the bolt cutters and measuring tape, and then hurriedly set the camera on automatic. Amazingly the whole process happened in a short period. Preparing for the release of this 10-1/2' fish, she didn't even budge when I pulled. With 71"girth and pushing 600lbs, I knew it was going to be a task.

The large dark eye of the tiger seemed to follow me around while I thought for a minute. A trick learned from Chris Sessions, I used every ounce of strength, "rolling" the fish a few feet to the dropoff. Finally she was at the break of the surf, kicking and thrashing a good sign. I dug down to my remaining strength reserve and walked her far enough to where she wouldn't get beached, and ever so slowly she took off into the current.

I wish I could have recorded the sight of that tiger heading over the second bar, but honestly, I doubt any amount of film or video could have burned it any deeper into the salty fibers of my brain. On that incredibly eerie night I managed to overcome the odds. Catching the fish wasn't nearly as great an accomplishment as having to deal with the situation solo. Fortunately everything worked as it did for me and for the fish. That shark was tagged and it will be interesting to see where she might turn up next.

Encounters like this cannot be defined by words; you need to be there in the flesh and pat that thick leather-like skin. Once you make physical contact, your soul will forever be changed. I am currently taking bookings for overnight charters, specifically targeting this mesmerizing species. They are not caught every trip, but there is a good chance I will be putting someone on a tiger this November. Prime tiger time lasts into early December and then the big sandbar sharks will be moving in after the first few major cold fronts. Sandbars are a total blast as well.

I have a few good dates still available, contact me soon if interested in an exciting surf-sharking trip. Visit www.oceanepics.com for more information.