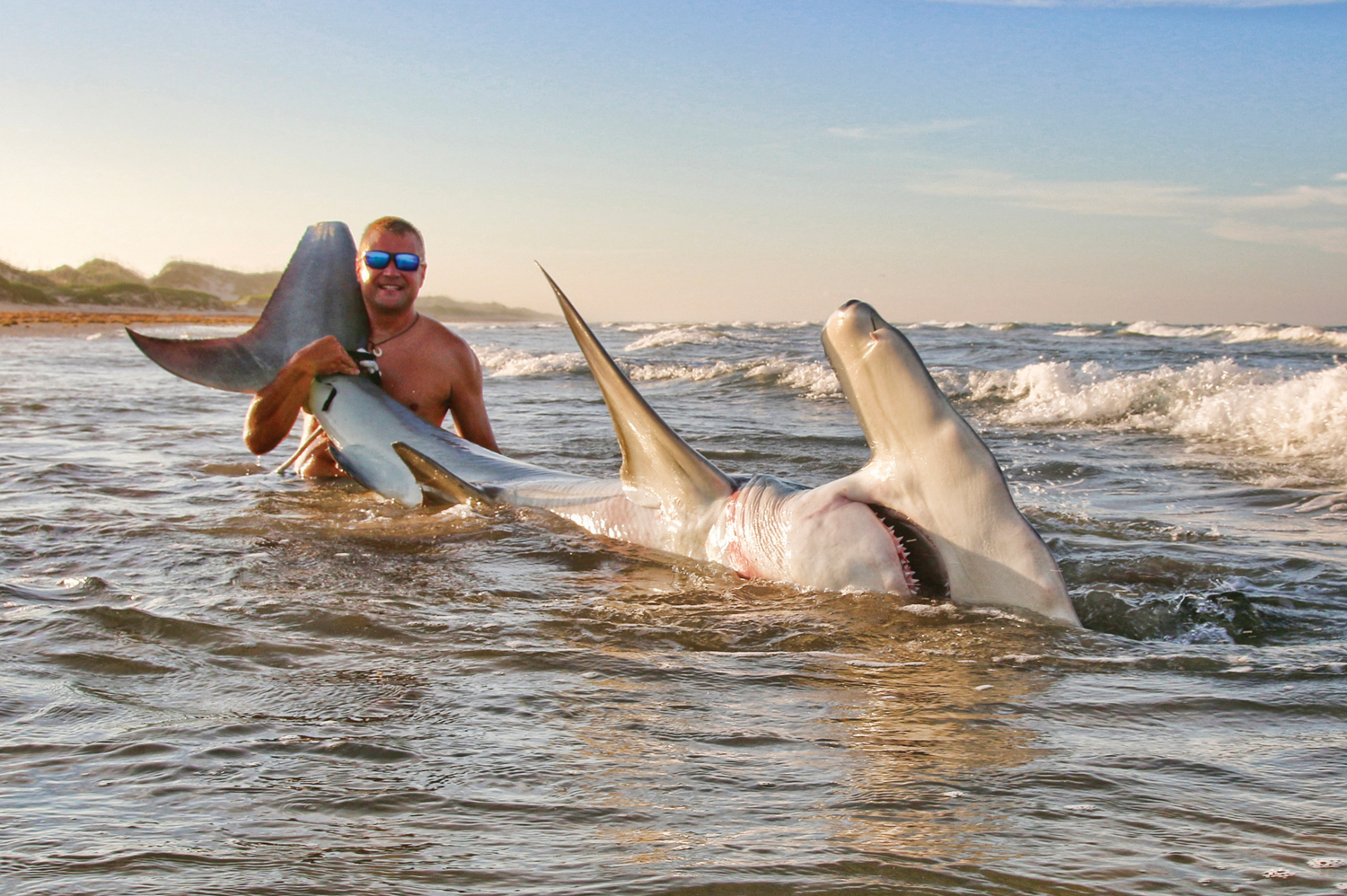 We often embark on fishing adventures, uncertain of what to expect. Hopes for a certain species or size run high but often prove unlikely. Marine conditions; clarity, currents, and water temperatures play key roles in what is possible. Texas shark fishing from the surf is regarded as some of the hardest land-based fishing in the world.Relentless wind and sargassum seaweed have a way of limiting success.

Anglers on other coasts face fewer challenges and Florida’s surf is renowned for being one of the most angler-friendly. Surf fishermen on that side of the gulf would likely pack up and go home if two-footers came crashing. By comparison, most Texas shark anglers would take it in stride, delighted the waves were not bigger.

Back in late-June, sandwiched into my busy surf charter schedule, girlfriend Alexis persuaded me to pack the truck for an overnight trip of our own. Hopes were high as the bigger tiger sharks had begun making their rounds. I had succeeded in landing a smaller specimen earlier in the month and attaching a SPOT satellite tag prior to the release.

Through such tagging, Harte Research Institute and Center for Sportfish Science and Conservation work in conjunction with Ocearch’s real-time tracking. Individuals can go on the Ocearch shark tracker app and find the location of any shark through where it last “pinged” location data. Such data is very valuable as scientists become better able to understand daily movements and seasonal migrations. I have been fortunate so far to tag makos and large scalloped hammers for these organizations, and then a tiger earlier in the month.

So – the trip Alexis and I were about to make had great significance – to tag another tiger.

We ended up rolling down the beach around midday. For the past week I had been acquiring primo, fresh jack crevalle and stingrays for big shark bait. A combination of great water quality and fresh bait make chances at a big fish about as good as they can get.

The water was relatively calm but with a fresh influx of sargassum seaweed plaguing the surf. Padre Island is a unique stretch of beach in that water conditions can vary considerably from one location to another. Due to its geological location and structure, the National Seashore portion of the island is the area where the gulf makes its way farthest west. Here, the curvature of the coastline is evident and both wind and current all determine places that may or may not be fishable.

With all the weed washing in, we were forced to continue driving south on the hot summer sand. Finally, after a two-hour journey we reached an area where the nuisance weed was much lighter. The water looked fantastic and birds were working schools of bait offshore. Time to play the game!

We began setting camp and rigging shark rods. Typically, my tiger hunts are done at night, setting the baits just before dark. With the water looking so good, even though it was early, I decided to kayak out four main shark lines. Two would have medium-size baits and two much larger, what I call premium big shark offerings. If the smaller baits got hit, great! If not, the lines would already be out and I could switch to larger tiger offerings right as darkness was falling. Placing the smaller baits in the spread might also give us some blacktip and bull shark entertainment until the big tigers came prowling – or so we hoped.

Sure enough, about an hour into it, one of the medium baits gets hit and Alexis brought in a nice blacktip. We quickly got it measured and tagged and sent it on its way. With the wind forecasted to pick up late afternoon, I decided to hold off running that bait back out until right before dark so I could change everything during a single kayak run.

Getting toward 6:00 pm, too early to make the bait rotation and itching for action, we decided to throw lures for sea trout, something I don't do as often as I would like. Walking and casting down the beach, I finally landed a nice dinner fish and Alexis offered to walk it back to camp, about three hundred yards. I continued fishing down the beach.

Weeding through skipjacks and small trout, I finally hit another good dinner fish and looked around for Alexis. Expecting to see her returning along the water’s edge, I was very surprised to spot her atop the truck platform, waving. At least from that distance it looked as though she was waving.

I started walking back but it wasn’t long before I realized she was trying to send an SOS. Fast as I could, I sprinted the final distance and arrived to find my 80W reel screaming like a banshee.

The amazing initial run had been going several minutes with Alexis videoing. With great desire of obtaining and tagging another tiger, I knew instantly this fish was not one. Vaporizing the line off the reel as it was, I was quite certain we were doing battle with a great hammerhead. The game changed.

Almost a year to the day, I had landed a giant greater hammer and, that fish, like so many of that size, very disappointingly fought to its death. While I did everything right in attempting to release that previous giant, I knew I had to somehow give this one even more. I began praying that with Alexis’ help the outcome would be different with this one. But we had to land it first.

Fifteen minutes into the fight the shark had dumped more than half the spool - roughly 1000 yards. It finally showed signs of tiring but still heading offshore, and crossed over the two other shark baits. Alexis jumped down and quickly brought them in to preclude any possibility of tangling and jeopardizing our chances for a clean landing and successful release.

Another fifteen minutes passed and I finally got the shark turned and it was time to strategize. Harte wanted a great hammer wearing a satellite tag in their system but, I was also keenly aware that every second is precious dealing with a hammerhead of such size. To me, a clean release was more important than taking the time required to attach the satellite device.

Continuing to work the fish to the beach as quickly as possible, I discussed all this with Alexis. IF we land it, we would keep it in the water and work as quickly as possible to remove the hook and get measurements. Fortunately, for me and the fish, she started swimming to the beach. Running up and down each parallel sandbar, which is a very good indication of remaining strength.

Still exhibiting great power, I shifted the large reel into low gear immediately whenever she showed stubbornness to cross a bar. No sooner than she reached the second bar we were treated to the tall saber of her dorsal above the surface. What a magnificent sight. Minutes later she was resting in the first gut.

I leaped down to grab the leader, leaving Alexis on top to roll up any slack in the line. The tide was still fairly high, which worked in our favor. Attaching the tail rope, I managed to pull her into shallower water and rolled her on her side. Bolt cutters made quick work of the large circle hook lodged perfectly in the corner of the jaw.

The large female greater hammerhead taped out at 11-feet and 2-inches, even with the terminal lobe of her caudal fin completely missing. Tail intact – I believe she could have made 11’-10”, or more.

Her girth was massive, in all likelihood full of pups, making the mission to release even more critical. Struggling, I got her righted and Alexis grabbed photos.

Everything was going incredibly smoothly as I nudged her backwards, deeper into the first gut. Once in deeper water, I got her pointed into the current and began walking with her. In less than two minutes she regained her bearings and began swimming.

She kicked hard, swimming on the surface at first, with that enormous dorsal raised high, as though to signal thanks for the quick and respectful release back into the sea. Of all my shark releases, this is the most incredible for many reasons. What an experience!