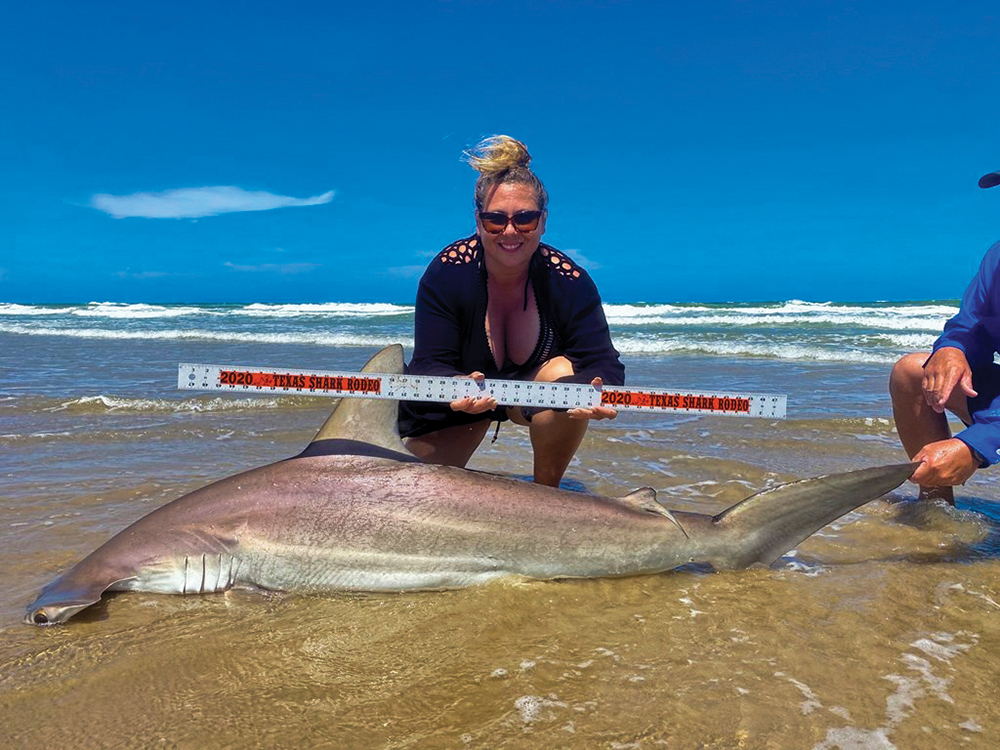 Kat Hunter with a scalloped hammerhead.

With the sun's full force scorching the fine sand, shark hunters set up long lines of camps on Texas beaches, hoping to tangle with one of the ocean's largest toothy critters. This is not a sport for folks without patience.  Unlike the chaotic action that occurs in spring and fall, summer can provide a strangely stagnant setting. Some individuals risk losing their sanity as they wait seemingly endless hours for a bite.

In the best-case scenario, long after boredom has set in and all hope seems lost, it happens... a nuclear explosion of a shark-run causes one of the largest fishing reels known to man to spin and whine.  The surge of adrenaline caused by such a moment shakes one instantly from their daydreams; this is reality, the stuff of legends.

In response to the strike and run, anglers strap into the harness and become one with the rod and reel. The fight that follows is a battle which will test the toughest souls. Those who possess adequate physical and mental strength will endure long enough to see the beginning of the end.  At that point, they might look out over the water and see a towering saber extending above the waves—the  signature fin of the great hammerhead, one of the hardest fighting fish in the world.

Here in the Lone Star State, many anglers treasure the idea of encountering one of these impressive beasts, which rank high among the most powerful fish to battle on rod and reel. All great hammerheads swim with incredible speed and can exert mind-blowing bursts when hooked. They can also turn and run the opposite direction in an instant.  Their shovel-like heads generate torque for the fight; they also function like tools, useful for scooping stingrays, a favorite prey, right off the sea floor.

The combination of strange appearance, awe-inspiring size and ample powers explains why anglers have a long history with giant hammers in the Gulf. In Florida, a well known myth has circulated for about half a century about a legendary fish called “Old Hitler,” a great hammerhead of epic proportions, marked with a variety of scars left over from battles with harpoons, guns and outboard propellers. Any Florida shark fishermen worth the sand in his boots has certainly heard tales about the creature.

Texas anglers claim their own unnamed giants of mythological proportions. In the mid-20th  Century, Port Aransas was the self-proclaimed tarpon capital of the world. What eats tarpon? Giant hammerheads! In the Coastal Bend nearshore waters, over the decades in the “Golden Era” of shark fishing, countless giant hammers were caught and photographed. Many old restaurants and tackle shops display fading photos on their walls of some of the mega-monsters which met their fates in battles with warrior anglers.

This year, several giant hammers have already been landed on the Texas coast. I was personally  present to see the largest so far, a monster which measured nearly fourteen feet caught by Kevin Loper and nicknamed “Dinosaur.” Seeing a creature of this size evokes powerful feelings.  For Kevin, this was certainly the catch of a lifetime. Other large hammerheads have been landed, some by anglers outside the boundaries of the highly regarded Padre Island National Seashore.

Many people are now saying we have more big sharks than ever before. I'd say that's completely inaccurate. Truth is, year after year, more and more shark fishermen head to the beach, carrying high-quality gear. Statistically speaking, this increases the number of encounters with big sharks.  In other words, the number of big sharks isn't on the rise; the number of anglers targeting and catching them is.

In Texas, we have three main species of hammerheads. The smallest and most abundant are the bonnetheads. These micro-sized versions of their massive cousins max out around four feet in length.  Bonnetheads are often caught by anglers fishing from the surf and piers using small baits like shrimp or squid.

A step up on the size scale are the scalloped hammerheads. These impressive sharks top out at just over nine feet in length. During the spring months, scalloped hammerheads run the beaches searching for food; they're usually caught close to the sand by anglers casting baits like whiting, skipjacks, and bluefish.   Scalloped hammers provide loads of fun on medium-weight tackle, and if handled properly in a timely fashion, they can be released with little or no problems.

Interestingly, nearly all the scalloped hammers we encounter on the beach are males. Where are the females? Why do only the males migrate along the coast? Scientists today are studying these important questions.

Other issues need research, too.  Like the possible occurrence of two other hammerhead species in Texas. Our state lists a record for smalleye hammerhead, citing a specimen which reportedly measured 95 inches. Doing some research on my own, I think it's likely a false record, since smalleyes have only been documented off the Atlantic Coast of South America. All data from that area indicates the species maxes out at about four and half feet in length, a far cry from the alleged eight feet assigned to our “record.”

Neither a scalloped nor a smooth hammer would likely be confused with a great hammer—the  largest hammerhead sharks in the world. While officially confirmed at over fourteen foot in length, this massive species has been long rumored to grow to at least twenty feet. These incredible creatures have been finely engineered through millions of years of evolution.

Hammerheads are the freakish oddballs of the shark world . Among their unique qualities, I rate their rare beauty and raw power as the most inspiring. Those who grow up fishing the Texas coast and turn into sharkers generally find their love torn between the giant great hammers and the massive tigers. Having caught both, I remain undecided as to which I appreciate more.  Any angler who successfully catches and releases a large individual  of either species deserves accolades and praise.  Certainly, releasing an exhausted great hammerhead alive and well presents a real challenge to any fisherman lucky enough to stand in the shallows with one after pulling it from the depths.

The battles between mere men and these regal beasts are extreme on rod and reel, simply unrivaled. Those of us lucky enough to see and handle great hammerheads gain a special kinship with them, some reaching truly spiritual levels, like the one my friend and mentor Billy Sandifer had with the species.  Hammerheads will always hold a great place in my heart.  They motivate me to take a paddle and ride a hunk of floating plastic several hundred yards off the beach to deploy large, beefy baits, then patiently wait for monsters to claim them. Some say the whole process is a form of madness; I call it a way of life!