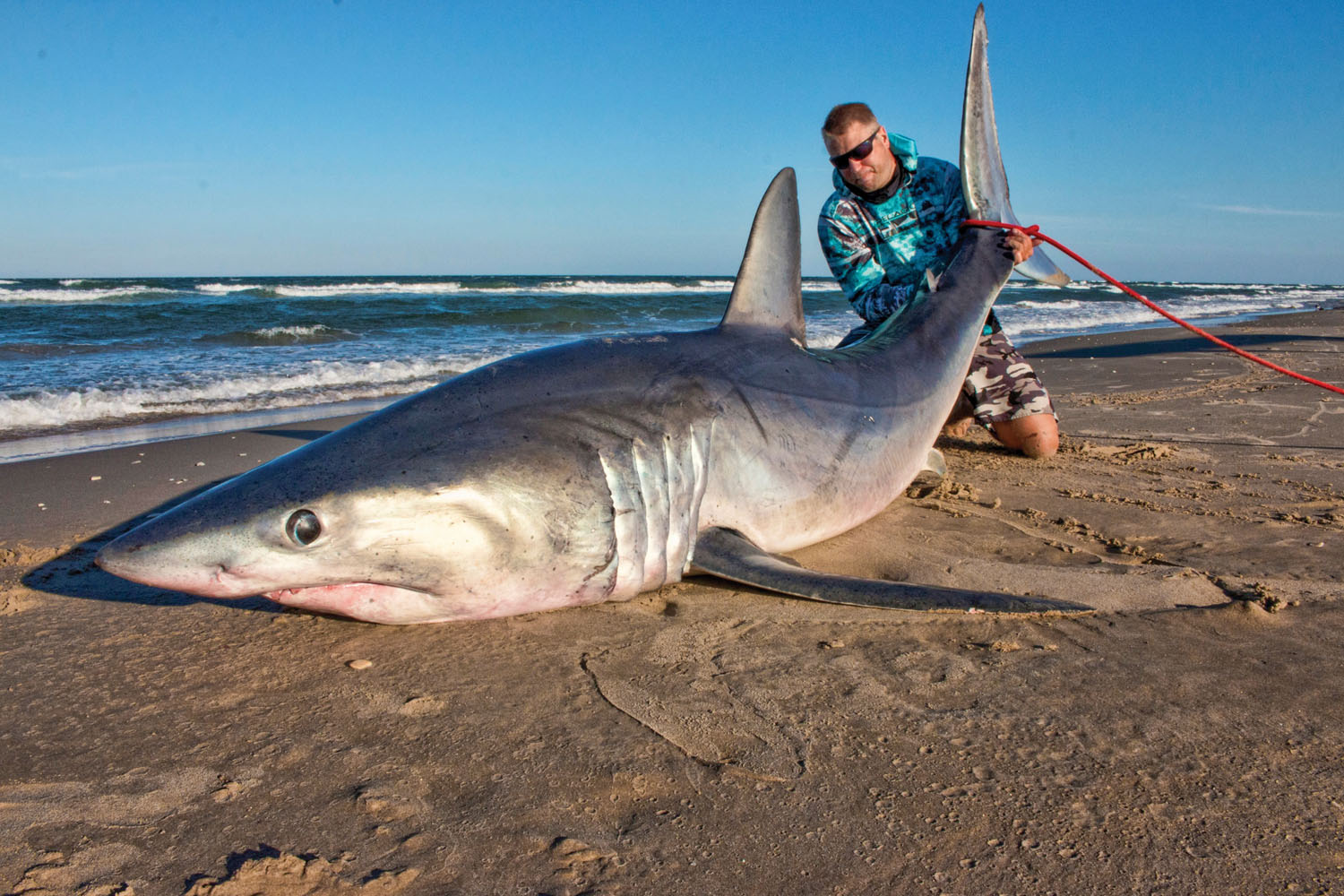 Much to the disappointment of the author, this incredible specimen of a shortfin mako wrapped in the leader during the fight, barely able to budge when dragged to the beach.

During 2016, I was honored to experience and participate in three very phenomenal shark landings. The first came on an early-summer surf charter on Padre Island with a client scoring one of the largest bull sharks brought to a Texas beach in recent memory. At 9-foot 3-inches, this behemoth taped three inches longer than the current state record and was tagged and released. Both the landing and the conservation message conveyed stand as milestones in the evolution of modern-day land-based shark fishing.

Roughly a month later, on a personal shark expedition, I landed the largest shark of my life. A greater hammerhead that measured exactly thirteen feet. And while unfortunately unable to accomplish a successful release and hoping to keep it under wraps, it ended up spreading like wildfire on social media. I will share the full story soon in another TSFM article.

And finally, the landing of an exceptional shortfin mako, the species originally responsible for enabling me to gain the notoriety I have earned and enjoy in sport fishing.

Land-based shark fishing is a beautiful thing. The mystery of unknown species you might end up battling is what drives shark fishermen. On rare occasions, something special and divine happens to dispute even the best science and logic. Mako sharks reign atop the list. Makos are one of the ocean's top apex predators and, in sportfishing terms, their leaping acrobatics and shear strength dominate about any species you can hook in to.

In Hemingway's classic, The Old Man and the Sea, Santiago fended off a large mako from devouring his massive marlin. Categorized as pelagic, the mako shark lives strictly in the open ocean. Whether traveling the gulfstream or open water currents, pelagic fish live a lonely life and exist by feeding opportunistically. It is no wonder then, that this species is very rarely encountered in the shallows, particularly the sandy inshore waters of the Texas coast.

On February 20, 1999, shark fishing history was made as Mark Davidson and the late Brian McDevitt landed a 9-foot 2-inch shortfin mako from the South Texas surf. This was the first recorded land-based landing of this species west of the Mississippi and it opened the eyes of not only the angling community but also the scientific community as to what was truly possible in our waters.

Then on December 7th, 2003, my moment in the spotlight came. As ironic as it may seem, I had premonitions for a week prior to that catch. Scott Nelson helped me tag and release the 9-foot 6-inch specimen - a first for land-based shark tagging.

During November of 2004, Stuart Richardson landed the largest of the first three Texas land-based makos. Stuart's fish went 10-foot 1-inch and ended up wrapping up in the leader during the fight. Large sharks will often wrap up and roll in the leaders as they breach the surface during the fight. This mako unfortunately was unable to be revived and released despite valiant efforts.

The mako scene would then go quiet for nearly a dozen years until March of 2016 when Brad Tabor would put Jessica Repa on a beautiful specimen just under 9-feet. They succeeded in tagging and releasing the fish.

A couple of weeks later, while fishing 18 miles from where Brad and Jessica's mako was landed, I assisted Dwade Hickey land his monster. We were fishing together in spaced out camps running big-baits for early-season tigers. Dwade had a large shark pick up his bait and after a solid fight, Scott Nelson and I were in the water expecting to leader a big tiger.

Our eyes grew wide when we noticed it was not a tiger but a large and ghostly mako. Dwade's fish was a 10-foot 6-inch female, with tremendous mating scars. This was an old shark and we could only imagine the battles it must have lived through. We succeeded in placing a satellite tag on this specimen for the Center for Sportfish Science and Research. Its whereabouts could be tracked through the Ocearch shark research website and mobile app. History was made again as it was the first land-based mako to receive a tag of the kind. The event was also the first time in Texas history that two land-based makos would be landed in the same year. But it wasn't over. On April 5th, Dwade would assist me as history would repeat itself again.

Since the landing of my first beach mako, I somehow always knew I would land more. Consider it premonition. My original mako was a result of newly acquired knowledge and experimental techniques gained from living down in the Caribbean, of all places. In addition, surf makos are very precise for the conditions in which they are present. Water temperature, clarity, and bait sources must ALL be exact for any chance at a mako from the beach. Over time, I have narrowed these variables as much as possible, and this past spring all those factors aligned perfectly.

We all knew full well that we might go many years before seeing another mako, as occurred during the mako drought that followed the third-ever beach landing. However, our mako window for 2016 was reaching into April, far longer than expected. And while not exactly targeting a mako, I knew there was a chance they were still around as a fellow angler recently claimed to lose one a couple days earlier. This trip for me was more about big sharks in general, and thus I decided to run uncommonly large baits for monster tigers. Makos, while having a large appetite, aren't designed to inhale a huge chunk of meat with a single bite like a tiger...that is unless it is a mega-mako!

Fishing solo in my camp, with Dwade spaced a couple hundred yards down the beach in his own camp, my adrenaline factor was about to explode. Preparing another large bait in early afternoon, my attention was drawn to my 80W reel starting to click. I knew it had to be a good fish to pick up a whole jack crevalle.

I hopped up on the platform and got harnessed in. The fish was taking line at a slow but steady pace until suddenly, like a switch, it took off. On heavy drag, the line was blistering off uncontrollably. My heart pounded faster and faster. Scanning the surface offshore, at roughly 700 yards, there came a massive eruption. As though an automobile had been dropped from the sky, a huge splash was generated in all directions. In my mind, only one fish could do that, and I knew right there I was fighting a mako. And not just any mako, but a mako capable of swallowing a 20-pound bait. A few minutes into the fight I was able to flag Dwade and he came quickly to survey the chaos. The fish was still smoking line when he arrived and my legs were trembling. I was in the fight of my life!

The mako continued to break the surface with great explosions every few minutes. Completely awed by the performance, all I could do was remain calm and conserve my strength, waiting for the shark to turn. After what seemed eternity and with nearly a mile of line out I was finally able to get it turned. Not wanting to allow it to recover strength, I cranked as hard and fast as I could.

When the fish approached the third sandbar, it made a stand and turned for another offshore run. In doing so, it thrashed violently on the surface, pectoral fins windmilling wildly, and becoming wrapped in the leader. Dwade went out in the kayak to free another line it had also wrapped into, to allow me to winch it shallow enough to apply the tail rope. Sadly, having been wrapped in the leader proved too much, and that magnificent fish barely twitched as we dragged her to the sand. Like Stuart's fish, this shark unfortunately did not survive for the release.

While greatly disappointed in being unable to release her with a satellite tag, I spent several reverent minutes to just admire, study and appreciate it. Pure apex predator perfection by every aspect of design. Everything about it was pristine sleekness and power. The tape said 10-foot 10-inches and we estimated 700 pounds or more for my second surf mako. The largest of six documented Texas surf landings to date.

Fishermen gather certain feelings about their greatest catches and the first minutes of fighting that incredible mako overshadow all my previous experiences. The line melting from the huge 80W reel and the huge initial surface explosion will be forever etched in my memory. That's what I mean when I say the mystery of the unknown is what drives shark fishermen. I pray there will be more.