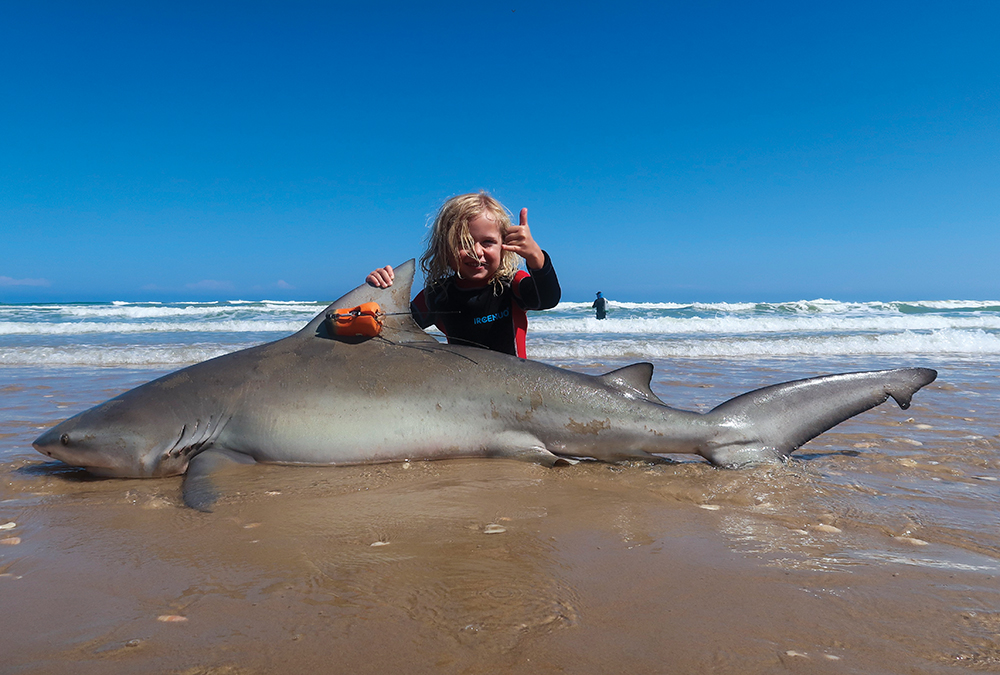 My profession brings me many great joys; one is allowing me to share glorious adventures with people of all ages. From toddlers to great grandparents, I've chartered the entire spectrum of age groups. I do enjoy working with venerable anglers who possess high levels of skill, and those who have great wealth and wisdom, but young kids consistently top my list of favorite clients. The power of youth incites emotion, especially in the wild world of nature.

Many youngsters see creatures like over-sized red drum or giant stingrays as mythical sea monsters. And when a child wins a battle with a shark on the beach, they often display a wide array of emotions. A ten-year-old staring at a seven-foot predator can feel everything from excitement to fear to disbelief. Sometimes, I pause to take a long look at the kid admiring a shark or other big fish. I can see their mind wandering all over the place, in a state of euphoria. Their eyes look like saucers, frozen in place by curiosity and astonishment. The wonder these youngsters experience inspires awe in me.

We were all kids, at some point. Many of us experienced many cool things in our youth. The lucky among us felt deep feelings after catching our first prized fish. For some, the species might have been a largemouth bass, old bucket-mouth. Many remember the ecstasy we experienced after catching a fish like this.

I caught all kinds of freshwater fish in my early years, but a saltwater species molded my purpose in life. I first had a close encounter with a shark while seeing one hoisted from the water onto a pier in Florida. I had seen sharks in aquariums, but seeing one live in the flesh was truly a surreal experience. This moment ended up spurring my interest and consuming my mind and soul. Twenty-five years and perhaps a thousand land-based encounters with sharks later, I still feel the same feelings with every shark I meet.

I've been fortunate to conduct many trips with families. Many of those included children of fairly young ages. Interestingly, some of the largest sharks I've ever had clients land were handled by kids. The largest hammerhead and tiger shark on any of my charters were caught by youngsters. I've also guided other children who were uncanny magnets for fish like gafftop catfish.

Most people think of these big slime-balls as little more than pests. Others, like a particular child I've taken fishing several times, experience great joy when catching big ones. Almost every time this kid takes a trip with me, the gafftop curse follows. To him, of course, it's clearly not a curse, it's just downright cool. Even a fish the size of a common whiting or mullet can stir the heart of a young person.

I had one of my most memorable experiences ever with a kid on a charter a couple months ago. A friend of mine convinced me to lead a birthday trip for his four-year-old son, appropriately named Finn, an avid waterman like his father. This kid is a micro mixture of Johnny Utah and Ernest Hemingway. I've watched him mature for the duration of his short life; he's so cool I have to remind myself he's only four.

To say the least, I was honored to take part in the family adventure. Fortunately, this trip was set in October, a month in which we tend to have some incredible outings. To celebrate the day of his birth, Finn's family and a few of his friends joined in the aquatic festivities. I knew I had to put my best foot forward and pull out all the stops to make this trip as memorable as possible for everyone.

When gloomy weather turned perfect to accommodate us on our trip, the pristine day created an immaculate setting for an epic adventure. When we arrived at the beach, I wasted no time getting several fresh shark baits deployed, and we did not have to wait long for action. An hour or so into the trip, a shark nailed one of the baits, and we were hooked up! I asked my buddy Antonio who he wanted on this fish, and he predictably replied, “Finn.”

Eager for a fight, Finn crawled up on the rack with his dad. I left the rod in the holder for him, and standing on an upside-down five-gallon bait bucket, the boy was able to crank the reel. From the minute he started, he kept at it and stayed dedicated. I had set the reel in low gear; he wasn't going to gain as much line as normal, but it would certainly be easier for him to crank. Finn's persistence paid off after about 25 minutes of a one on one battle with the shark. When the time came to land the fish, I could only assume the past half hour surely seemed like eternity to the kid.

After an exhausting fight for a young child, Finn landed his shark, the biggest fish yet in his budding career—an awesome six-foot bull shark. After jumping down off the platform, he made a mad dash straight over to where his opponent flopped on the sand, grinning from ear to ear, with an enthusiasm resembling a blue collar worker who's just won the Power Ball lottery.

At the time, Finn wasn't aware of the added bonus for his catch, which aided in scientific research. On the dorsal fin of the shark, I placed a specialized ADL satellite tag, one which will record a lot of important data, particularly about survival rates of released bulls. Within just a few days, the tag is set to detach from the shark and transmit info to the satellite. Once recovered, the researchers can study the data. Over the past three months, I've put out multiple tags on sharks; my own young daughter had the privilege to partake in one of those tagging sessions. While she showed more curiosity than excitement, I could read the emotion in both those kids.

Finn was completely elated with his shark, but more excitement lay ahead. Boys and girls who joined us on his birthday trip all took part in catching a variety of sharks; we landed several bulls, the largest measuring 8'2" in length. Each and every shark put on the beach inspired a touching reaction by the young crowd. The trip was unforgettable for all who went!

At the end, I was incredibly happy and satisfied by the results of the fishing, and profoundly affected by the reactions of all the kids who got to see sharks up close for the very first time. Let's face it, not many four-year-olds can brag to their friends that they legitimately caught a shark. Meanwhile, my daughter Rory is on her way to becoming a shadow to Finn and stepping in her father's footsteps. After turning two years old, she's eager to follow her daddy into the fishing world. I'm extremely proud of her and can't wait to see her react when she pulls her first giant onto the sand!