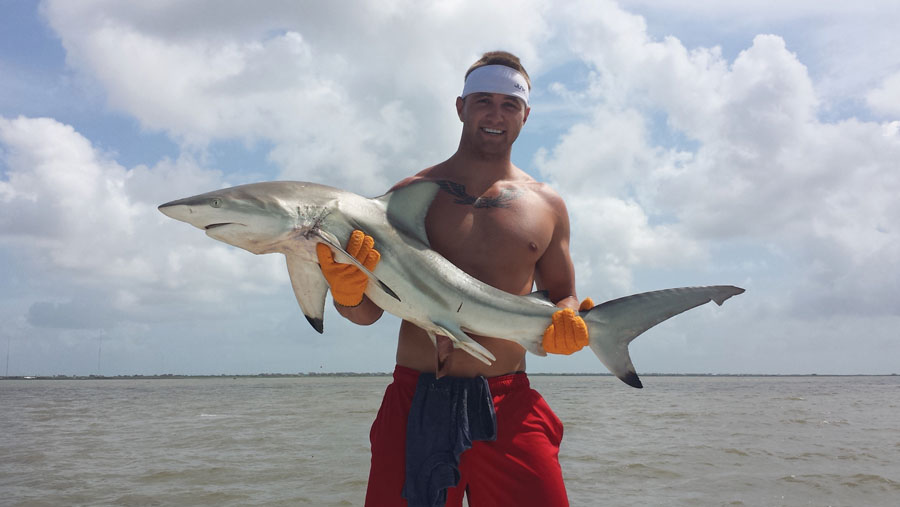 Ol’ Jaws comes in many sizes!
I recall vividly my first shark, a few months following the debut of Jaws. That movie terrified me to the point my mother later joked that I took baths with the bathroom door wide open. I even flunked out of swimming lessons that summer. Looking back I was most likely having panic attacks in the pool.

Like the many fishermen that summer I had a goal of catching a shark. Fishing was always fun for me, but the pursuit of my own Jaws changed my outlook dramatically. I became infatuated with catching this demon, needing to face my terror head-on.

Every trip to Port O'Connor was more exciting than the last; I started paying more attention to details while anticipating the catch. Each time I hooked a fish I was nervous as the rod bowed not knowing if it was the ONE.

Somehow my dad talked me into holding the shark for a photo, all 30-inches of it. I remember wetting my pants while standing there with a death grip. My dad took forever getting his camera out of the bag in the stern of the boat, probably trying not to laugh. Surely my dad noticed my pants but never said a word. After the catch I felt more alive than ever and somehow at age five I knew that whatever challenges greeted me in life I would handle them just fine.

Going fishing changed everything for a little fat kid that day by providing a lifelong bond with his father. I miss my dad greatly and I think about him every time I'm on the water. But I guess my eyes tearing up occasionally is better than wetting my pants in front of clients.

Whenever you find tarpon there are usually sharks nearby shadowing the schools and picking up scraps. Using natural bait almost always guarantees a shark hookup when targeting tarpon. Even lures are eagerly attacked by blacktips, spinners and the occasional bull shark.

For targeting inshore sharks of 25- to 75 pounds I fish depths of 8-feet and more in the open bay. Good areas are near channel edges, sand humps and large bait schools. Sometimes we anchor and chum but drifting with several baits strewn behind is more effective.

I like live mullet of 9- to 12 inches below a balloon inflated to grapefruit size. The balloon will keep the bait off bottom and the bait's distress signals will bring sharks from a distance. The balloon also keeps live bait from swimming back and tangling other lines. The ballooned bait is normally positioned farthest back, approximately 75-yards.

Fresh ladyfish chunks about the same size as the live mullet are hard to beat. Smaller pieces of bait work also, but the gafftop often consume them before a shark shows up. I like to drift the ladyfish pieces 2/3 the distance to the balloons. This bait is fished without a float or weight. Occasionally the bait will bounce bottom which helps spread scent and creates vibrations.

Live or fresh-dead menhaden of 6 to 9 inches are very effective, especially for blacktips. I weight these baits lightly and place at half the distance toward the ladyfish. The amount of weight varies according to depth and drift speed. A bank sinker of 2- to 6-ounces affixed by a #32 rubber band works well, looped through the sinker eye. The rubber band is now placed on the leader in front of the steel trace by the same "looping" technique. The rubber band allows the weight to be removed quickly once near the boat or to break free if the shark jumps. Lead weights swinging as a fish comes boatside can easily chip gelcoat or take out a row of teeth.

Leaders are 72-inches long of 100 to 150 pound mono with a 200-plus pound black barrel swivel at each end. A 24-inch trace of 108-pound single-strand wire for mullet or menhaden and 178-pound for the ladyfish is attached with haywire twist to the swivel and same for the hook at the business end. My circle hook preference for menhaden is normally smaller due to the bait size, I like a Mustad 39941D 9/O and a 39965D 14/O or 16/O for the other baits.

Catch and release is usual practice on these apex predators. Removing the circle hook if caught on the outside of the jaw is best. Using a pair of 18" bolt cutters keeps hands away from sharp teeth and rough skin if the hook cannot be removed. Cutting the hook in the bend is a very humane approach to releasing them in good condition. Sharks should not be brought aboard unless being kept for table fare. Gloves should be worn when handling heavy mono or steel leader with shark attached.

By Independence Day tarpon will be frequenting the jetties and nearby surf line. The sizes of fish and methods to target them can vary widely according to the daily tides. Often fish from 15 to 150 pounds can be hooked from the same schools, making tackle selection difficult. The only way I have found to skew my catch size is to gear up with larger lures or bait. As with elephants, large tarpon often eat peanut-sized offerings, so the possibility of being under-geared is great.

Many books have been dedicated to techniques for tarpon. So to simplify I will concentrate on the little guys. Smaller fish are more apt to feed by sight, closer to the surface than the larger breeding stock that often sulk in the depths. These "schoolies" can be targeted with standard bay gear and as a bonus many other fish species often jump on the hook.

I always say, "Find the current—find the bait—find the fish." Keep this in mind when fishing the rocks. Juvenile tarpon will most often be found within the last 100 yards of jetties toward the gulf. I typically began seeing them under 48" around late-June and early-July. Their appearance often coincides with the arrival of pods of glass minnows and dusky anchovies.

Casting your offering up-current will provide a presentation similar to forage being swept by the flow. Casting parallel to the current seam or the rocks in the vicinity of rolling fish will also get you in the strike zone. Favored lures for blind-casting are the Bomber Super Pogy and Rapala X-Rap XR-10. Freelined live shrimp, finger mullet or croaker rigged on circle hooks work great, too. I like to toss live bait into the current and keep a slack line allowing the bait to settle into the moving water and sweep past the boat before retrieving for another cast. Adding split shot weights helps keep the bait swimming below the surface.

Another very effective tarpon rig is a downsized "coon pop" based on modified 1/8 to -3/8 ounce jigheads. To make a "pop" I cut the shank of the hook halfway between the lead and the bend, retaining the head with wire spiral bait keeper intact. To attach the circle hook (MUSTAD 39944BLN or 39950BLN 4/O - 6/O), I use 10 inches of 10-pound braid cinched onto the jighead eye with three square knots and do the same to attach hook to the jighead. This arrangement allows the circle hook a good bite into the tarpon's hard jaw and also allows for the jig to break free or "pop off" during the fight or when hung in rock crevices. To finish the lure I like a 3" DOA shrimp on 1/8 ounce modified jig, 3-½" YUM Money Minnow on the 1/4 ounce and a DOA Airhead on the 3/8.

Juvenile tarpon are very energetic and often make multiple fast runs and jumps. Leaving the fish in the water boatside allows them to revive without additional stress. Bringing a fish into the boat often makes them thrash violently leading to possible injury and removal of their protective slime.

Replacing stock treble hooks on plugs with single hooks is far kinder to these youngsters. Using circle hooks with bait makes better hookups and an easier release with less chance that the angler happens to get hooked boatside.