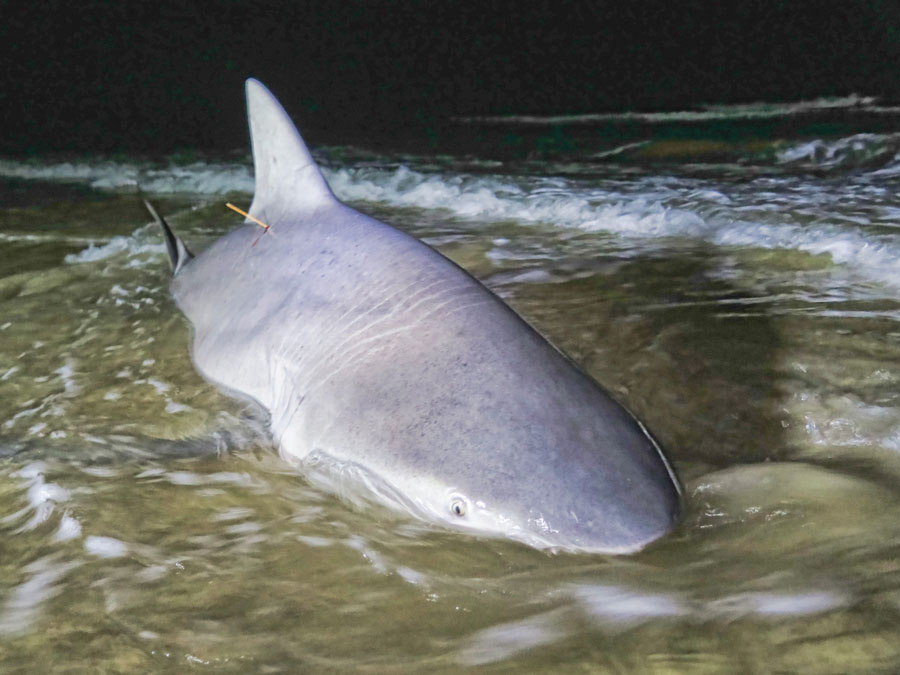 Nighttime bull shark caught on casted bait.
Before the advent of modern sit-on-top kayaks, big game surf fisherman resorted to an unusual array of methods for bait deployment. In Texas' golden era of shark fishing, determined and crusty anglers would dangerously paddle surf boards, generic rafts, or even automobile inner-tubes, tirelessly dragging baits beyond most folk's physical limits. If conditions were too treacherous (for small and sometimes homemade flotation devices), relentless anglers would even result to Olympic-style hammer throws from the second sandbar. There was a mixture of humor and amazement for witnesses as baits were slung into the next available gut. Nearly every contraption possible has been tested (and failed) in quest to get shark baits into deeper water, yet one of the most overlooked facts in surf fishing is that many of the shark species often swim and hunt in very shallow waters.

Simply put, the traditional method, casting bait with rod and reel, has long proved extremely efficient even though many continue to believe farther is better. From antique bamboo sticks to modern graphite long-rods, casting is and will always remain king for consistency. The thought of lobbing a two-pound bait along with a weight seems a little excessive to some, and yet hardly adequate to others. Nonetheless, it is a method that will always allow you get to get baits out regardless of constantly changing water conditions. While advances in rod and reel technology have helped maximize casting distance, the goal itself is just to get the bait out, if only lobbing it a mere 25 feet.

With springtime warming coastal waters, bait and predatory action begins to take shape. April is one of my favorite times for inshore sharks. Casting out in a raging gut perhaps only 4 feet in depth could result in a shark beyond your expectations. There is a stereotypical label and myth that sharks can only be caught in deep water. If only the general public knew how close these creatures really do come to the sand, especially on a quiet stretch of beach. If conditions are calm, it is not uncommon to see a shark swimming knee-deep surf at sunrise. While cruising the beach in my 4WD, I often see sharks swimming knee-deep in the first gut, dorsal above water stalking prey from small whiting to large jackfish. Occasions like this are the reason I travel with a rod ready for sight-casting. A technique I employ often is playing hop-scotch, getting out on the bar before they swim past me. Then I make sure I have my bait out in front of me and ready. I will repeat this procedure until the shark hits or disappears to deeper water.

There are actually several advantages to fishing in close. Sargassum is a constant threat to surf anglers this time of year. Getting your lines wiped out by this menacing vegetation is heartbreaking, especially if you have to take the time and energy to paddle your baits out 400 yards. An advantage of casting baits during times of heavy sargassum is the ability to quickly relocated and get a bait back out. The time and energy saved by simply casting could mean the difference between good morale, or packing it up in frustration.

April historically has been known for the inshore migration of several shark species. There have been many respectable catches of scalloped hammerheads and bull sharks via casted baits, to mention two. In addition, the highly abundant blacktip sharks will often destroy baits all day long providing hours of never-ending fun! As with kayaking baits unfathomable distances, the unknown of catching virtually any shark species still holds true.

When it comes to terminal tackle, the choices may be as varied as the anglers themselves. Personally, I have always tried to keep my gear as natural and practical as possible. Along with many things in life, you can overdo it, resulting in degraded results. The age old principle "keep it simple stupid" should be exercised in many areas of fishing, shark fishing in particular. Too much bling, whether leader beads or other items, can dissuade a potential fish from hitting. The majority of my casting leaders are between 8-10 feet in length. I have my weight in a fixed position via crimps to prevent the snap swivel from sliding. Having the weight in the middle of the leader allows you to hang up the bait/hook on the weight itself making it seem like you are casting a 4 foot leader instead of a seemingly impossible 8 foot mess. My preference of 300-550 pound mono and 14/0-18/0 circle hooks have provided stellar results.

As with any saltwater interaction within the surf-zone, there are dangers you must be aware of. If standing on a bar to cast your bait, keep your eyes open. I've had blacktips and bulls swim the bar and not notice me until less than 10 feet away. Fortunately, in almost every circumstance, the second they detect you they become startled and veer off into the deeper water of the gut. In addition to sharks, there are also stingrays. Rays love shallow guts where they can suck up crabs, ghost shrimp, and other small creatures. No water is too shallow for a stingray. The most common procedure is to slowly shuffle in a straight line to your destination. In doing so, you are more likely to alert a ray of your presence without stepping on it and obtaining a painful stabbing and possible infection. It is all about getting out to the sandbar safely to cast your bait. If you make it back to shore safe, you've already won.

While I try to kayak the largest baits possible for the most monstrous of sharks in our waters, there is a certain appeal to casting baits that I thoroughly enjoy and I will always attempt to have a casted bait out as an option. There have been years when I have seen more big spring-time lemon sharks caught on casted baits than on kayak-deployed baits. I have also been outfished by individuals exclusively casting baits when I would only kayak.

Do not underestimate the desire of sharks to cruise the shallows seeking a quick meal. If you have yet to do it, have a shark bait out in the first gut after dark, you might be amazed. One of the great pieces of advice my mentor, Capt. Billy Sandifer, preached to me was to keep a casted bait out as often as possible. Even if conditions or logic do not seem right; you never know when your next big catch will happen!