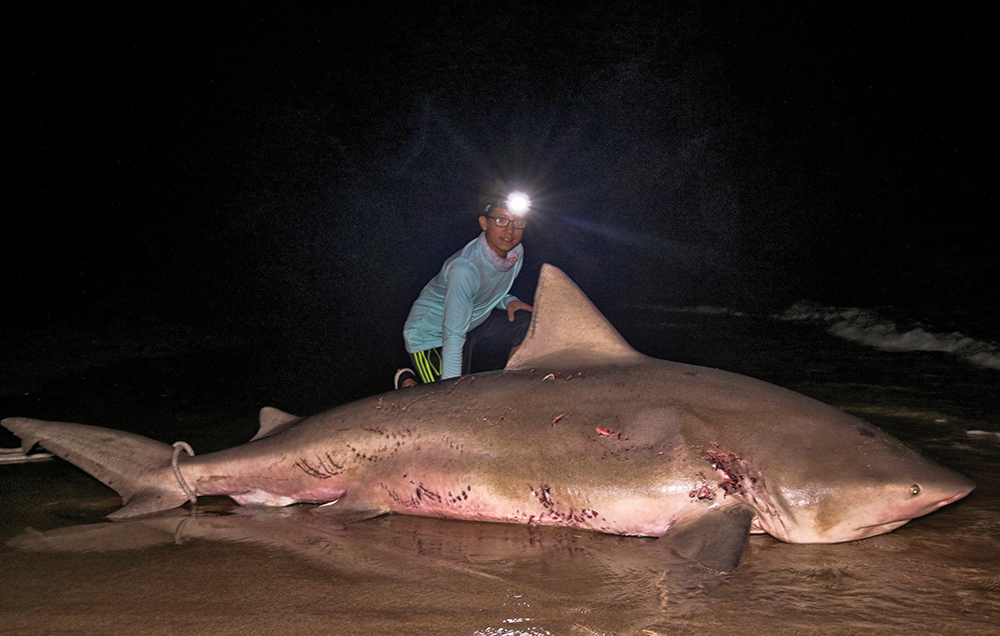 Prior to the major flooding in South Texas that occurred in mid-June in the wake of nearly fifteen-inches of rain, fishing had been phenomenal. In regard to land-based shark fishing, it may well have been some of the best on our coast in many years – perhaps decades. All the necessary elements aligned to allow things to explode. It began in late-spring when the surf turned relatively calm with no rain for several weeks. The normally pesky sargassum that typically begins to arrive mid-spring and continues into mid-summer was virtually absent.

With no sargassum, anglers were able to kayak and long-rod their baits with ease and leave them in place for hours. Shark fishermen came to the surf in droves and routinely produced incredible catches. There have been more big hammerheads, tigers, and giant bulls caught this year than perhaps the past several combined. As we close in on August we may experience another spectacular run of large sharks, especially if we make it through the month without significant interruption from the tropics.

August has always been a very interesting month along the coastline. We usually have grease-calm conditions with flat surf, blazing temperatures, and modest tidal movement. Daytime surf fishing is often quite slow with the exception of days when baitballs are randomly pushed near the beach.

For nearly two decades now, August has meant two things to me. Either hit or miss nighttime tiger shark action in the surf or the optimal time to venture offshore. I have always found myself in the kayak straying away from the surf as often as I could, heading to deeper waters in search of kings, cobia, and snapper.

Hitting any source of structure from the kayak; jetties, offshore platforms, or underwater obstructions, is usually an ideal way of getting in on action you normally cannot find elsewhere. While some local anglers prefer to hit the likes of Baffin Bay for trophy speckled trout, I'd rather be in the gulf in the kayak on a calm morning with the sunrise reflecting off the glassy water and watching a 40-lb kingfish go aerial as it destroys a topwater lure.

August also means prime time for getting offshore aboard a sportfisher. I have been very fortunate to have friends and the ability to embark on some truly epic offshore adventures. Traditionally, this is the peak of marlin season off the Texas coast, with the primary targets on trips I have participated in being billfish and tuna.

Trips aboard sportfishers can include single day, two day, and three day adventures. It is very soothing for the soul to be trolling the summer days away, a hundred miles offshore, jamming out to the radio and watching blue marlin launch as they hit a lure pulled in the boat’s wake.

Then, come nightfall, I am usually self-appointed to night crew duty and help run the boat. While most of the day crew are asleep, I and maybe a couple others stand watch, orbiting floating offshore oil platforms and wreaking havoc on yellowfin tuna with topwaters. This type of fishing ranks high on the list of avid offshore anglers and one I wish I could enjoy more often.

How much time I will be blessed will to enjoy offshore this month and the rest of the season is very much up in the air. My beach charter book has been filling in nicely and I expect more last minute bookings as family groups hurry to squeeze in a trip before the kids have to be back in school.

One of my greatest joys while conducting family shark trips on the beach is the opportunity to interact with youngsters; educating through nature and fishing lessons and putting them on fish. Capping it off with a first time, hands-on encounter with the magnificent species we are targeting creates excitement and happiness for both the youth angler and the guide that I cannot describe adequately with words.

And it’s not just about the kids. I enjoy the full spectrum of adventurers – first-timers to avid anglers. Parents, grandparents, and even great grandparents, hoping to scratch one species or another from a fishing bucket list are all priceless to me.

A fabulous example of a most gratifying and enjoyable kid-fishing adventure occurred earlier this summer when I had a gentlemen and thirteen-year-old son on an overnight trip. Young Richard and his father, while not newbies to the sport, wanted to try their luck at nighttime sharking. Their timing couldn't have been better.

During the day, Richard got into some blacktip action and also landed a large stingray that easily outweighed him. As nightfall enveloped the beach, little did we know that a truly epic event was coming his way.

Richard found himself in a battle royal that stretched late into the night, clinging tenaciously to a large shark rig. I was convinced it was a tiger as he fought a massive shark for nearly an hour.

Wading into the darkness to tail rope the beast, it occurred to me that something wasn’t right. Richard’s fish was not a tiger but a brute of a bull shark. The mature 9-foot female was among the largest I've seen of this species and covered all along her body with mating scars.

No doubt the queen of the gulf and every mature male had likely been fighting over her. Richard, his father, and I were beyond smiles and amazement. Especially gratifying was that we were able to accomplish the successful release of such an incredible specimen.

With so much that has already happened this summer, there is one thing beyond all and any fish that I am looking forward to in a few months. This fall, my beautiful partner in life, Alexis, will be giving birth to our first child – a daughter. If she turns out anything like her mother, she will dressed head-to-toe in camouflage prowling the South Texas brush in winter and wrangling sharks the rest of the year. We feel truly blessed and are extremely excited.

For the past few years I have been very fortunate to share incredible experiences with a great many young anglers and made memories that will last a lifetime with each of them. Now I will be able to do it with my own child. Please join Alexis and me in welcoming the next generation of the Ozolins family. Life is a beautiful thing.