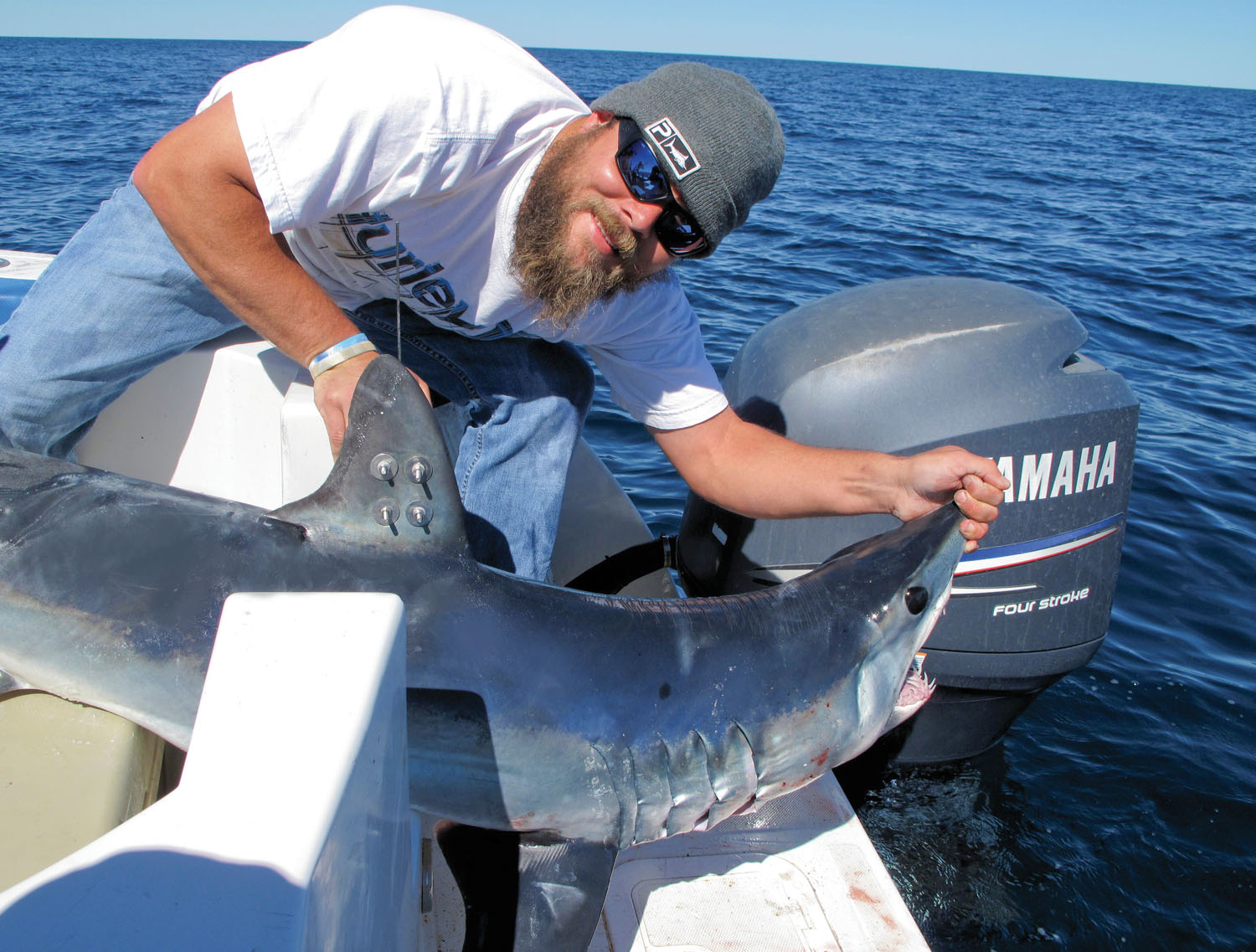 Ricky paused for a quick photo-op as he and Chris slid it back into the water through the transom door.

Perhaps the most fascinating of all sharks in our waters is the mako. There are two species of mako - the shortfin (Isurus oxyrinchus), and the less common - longfin (Isurus paucus). From an angling standpoint makos are some of the most glorified and sought-after among the shark family. The unique electric-purple and silver coloring in addition to a harshly menacing look adds to their majestic beauty.

This is a species that above all others were biologically engineered to thrive as one of the most impressive and capable predators in the ocean. The swimming velocity and ability to leap meters into the air are unrivaled by any other shark. Each interaction in the wild with this fish is considered a moment to treasure. Whether an angler is able to observe their surface prowling or airborne acrobatics, the awesomeness of each encounter can leave one speechless. Just as it has been for millions of years, the mako shark is truly a king of predators in the Gulf of Mexico and will always command respect with sport fishermen.

I hold the mako very dear in my heart, and for good reason. In December 2003 I was fortunate to become only the second angler ever to land one from a Texas beach. Two years later another was landed from the south Texas surf. Of the three surf-caught makos, my fish remains the only land-based tag-and-release mako landed west of the Mississippi.

My deep respect for this species was born the first moment of my first encounter. Gazing spellbound at the magnificence of my surf-caught trophy, I observed the finer details of the mako. The wide, muscular posterior keel that was responsible for propelling this shark was unlike anything I'd ever seen. Its lit-up iridescence literally jumped off the torpedo-shaped body and became etched forever in my memory. And of course, the teeth. Vicious teeth protruding outward like a monster in a horror flick. Absolutely everything about that shark was designed to perfection for survival in a cruel environment. Since that landmark catch over a decade ago, which initially placed me in the beach-angling media mainstream, I have been most fortunate to catch several others and be present to assist others in landing theirs.

Angling history for the mako goes back nearly a century and makos have been landed all around the globe. Specimens from both Atlantic and Pacific waters are documented to have attained weights greater than 1000 pounds. Landings from Italy and Turkey in the late-nineteenth century are rumored at nearly a ton.

Locally, a handful of anglers eagerly await the cooler months when makos can be realistically targeted on our coast. The Shindle brothers have been on the fore of Texas mako fishing for quite a while and Jeff Shindle's 707-pound state record from 2002 still stands proudly. Much of my personal knowledge of mako sharks, and that of other anglers as well can be attributed to Mike and Jeff Shindle.

Shark anglers like Chris Sessions have also come onto the scene and have proven very successful in landing makos. Much the same as Capt. Billy Sandifer, Sessions is a long-time beach angler who reigned as one of the best big-shark fishers over a period of nearly two decades. Nowadays, he allocates the majority of his sharking time to the offshore venue. Sandifer and Sessions deserve much credit for having mentored and helping shape me to become the shark-master people now claim me to be.

This winter season, despite the window of opportunity being a little shorter than normal due to the very mild winter, I and others were still able to get out. February provided consistent mako action in gulf waters offshore of Port Aransas and further south. Chris Session's vessel reported action on numerous trips. While average size was smaller than years past, the action was consistent. I was able to hop aboard with Chris and partake as a member of the crew for his last couple of trips.

Up to that point, February had presented very limited mako opportunity in the surf. I made a valid attempt but none were found. Multiple variables have to line up perfectly and this simply was not the year when they would all come together. The Harte Research Institute was again seeking my help in putting a satellite tag on a fish, and if there was one sure chance to tag a mako, I knew I had to accept the offer from Sessions and find them offshore.

On February 24 Chris Sessions, Ricky Torres, and I embarked on a mission to see if we could achieve the goal. A calm and clear morning greeted us as we broke the Packery Channel jetties. Our goal of course was a mako, but our most productive times have always been in late afternoon. Therefore we would go out early and troll while essentially trying to stock up on bonito and other mako baits. Trolling immediately provided a massive wahoo. We continued the morning troll and within an hour got another quick knockdown. I handed Ricky the rod as line dumped at an exceedingly fast rate. A few seconds into the run the fish breached the surface with a great leap and there was our mako!

Knowing that a morning mako was a rarity, we knew that landing it would be even rarer. After all, we had this shark hooked on a trolling setup, how could we possibly expect to land it without a leader failure?

Ricky battled the shark for more than 15 minutes as it made multiple jumps. As he closed in for the finale, Chris and I prepared the tagging gear. Ricky eventually got the shark calm and stationary alongside the boat and, when the time was right, Chris got the tail rope on it.

Then it was go-time! Unlike traditional passive tags that can be applied very quickly, this one had to be fixed to the dorsal via four bolts, which had to be drilled through the fin. We got it through the door of the transom and immediately went to work installing the tag. Everything went relatively smoothly and the tag was successfully mounted. Working hastily we got the shark back in the water and it swam away very strongly, seemingly unfazed.

High fives rolled across the deck as the realization of what we had just achieved hit us. Ricky's mako is now swimming around with a hi-tech satellite tag, aiding in research data collection for the Center for Sportfish Science and Conservation Program. Within 24 hours the tagging proved a success as it began transmitting data.

These SPOT (Smart Positioning or Temperature) tags transmit locations of the shark when at the surface. The tag relays coordinates to the satellites when the wet/dry sensor at the top of the tag becomes dry. The longer the tag is out of the water, the more messages are sent, and the better the location quality of the "ping" it transmits.