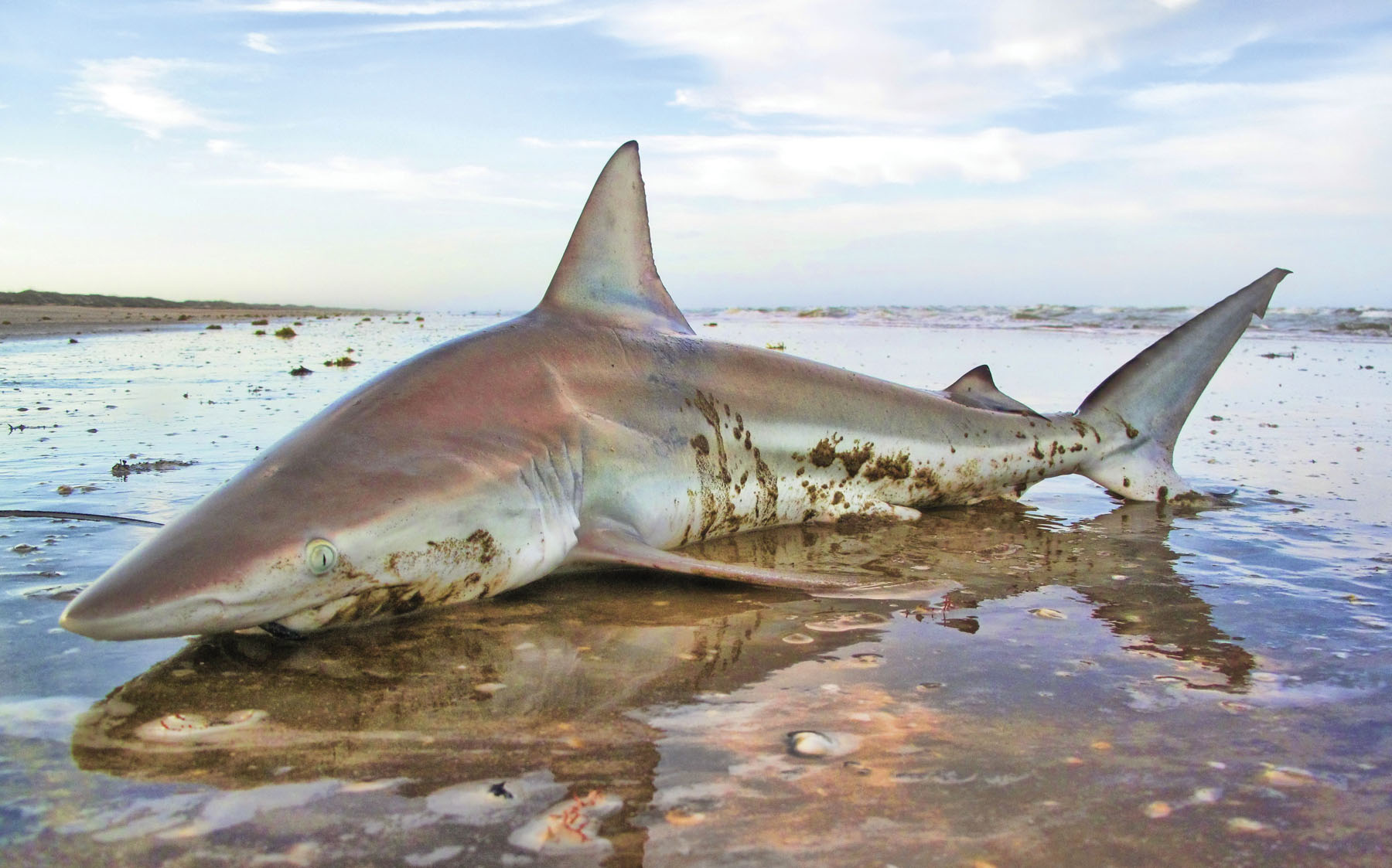 Oz with a casted bait blacktip.
The arrival of spring during years of prolonged winter is beyond welcome. Never was this truer than the winter season that is currently winding down. We battled numerous grueling arctic blasts that chilled the Texas coast for over two solid months. The brutal conditions have relentlessly shutdown the beach action since around Thanksgiving. Having several winter shark charters booked this past season, I know when I need to make the appropriate call and cancel a trip and that I had to do a few consecutive times. When the water temperatures plunge into the mid and low 50s in south Texas for over a couple months, little activity is to be found period. My only real action on the water was helping transport a sportfishing vessel across the gulf, through the Okeechobee waterway, and out to the east coast of Florida. With this journey I yet again announce how much I truly envy south Florida's year-round tropical conditions. However, winter is finally over and now we move forward!

As the water temps climb back toward the mid 60s we are going to see an explosion of prey and predator making their way back into the shallows. The month of March is dominated by the arrival of the large female blacktip sharks (Carcharhinus limbatus). These are by far the most abundant species of shark in our coastal waters. These sharks top out at between 6-7 feet and pound for pound are some of the hardest fighting fish in the shark family. More often than not when hooked, these sharks will put on an impressive aerial display. A big misconception is that it is only the very closely related spinner shark species (Carcharhinus brevipinnaa) that will leap and spin in the air. Truth is the majority of the time it is the blacktips you see free-jumping along inshore waters. They will jump upwards of ten feet out of the water twisting on a single axis hence the confusion with the spinner shark. There are theories on why these sharks jump, but having them rocket out of the water just feet from your kayak on a grease-calm day can be startling.

Blacktip sharks are singlehandedly the species that got me hooked on shark fishing. As a kid, I would see the smaller 3-4 foot class sharks get landed. Upon closer inspection, you noticed the fine details of nature's supreme aquatic predator. Even small specimens will protrude their jaws from their mouth and look like a menacing carbon copy of their giant cousins. From the perspective of a 10 year old, you simply admire the biological perfection while associating them with the creatures of Hollywood horror.

For beginning shark anglers, blacktips will provide experience to learn from and build upon. Shark fishing is an art and only by trial and error can you learn and improve your techniques. Blacktips are a top candidate for testing out your personal angling enhancements or modification, whether it be bait presentation or the type of bait itself. This species will often school together and their numbers during spring months can lead to an abundance of action.

The arrival of the blacktips in March coincides with its reproductive schedule. Usually, these prowling sharks come inshore to stock up on quick and easy meals before the pregnant females begin dropping their pups within a few short weeks. It is not uncommon to be driving down the Padre Island National Seashore in the morning hours and observe a blacktip in less than two feet of water. If you have never experienced this it is quite a sight, a dorsal fin exposed above a shadow, while cruising the break. In fact, anglers standing on the first sandbar fishing bird activity often have to be careful of encounters with this scouring shark. While they typically are more afraid of you, nonetheless, never let your guard down. The shear number of blacktips in an inshore area will certainly make you think twice about your spring-break beach swim!

Fishing for blacktips is nothing short of fun regardless of experience level. Many smaller specimens are landed as the result of a novice's by-catch, in which their razor sharp teeth did not sever the light monofilament used for other species, whereas the larger of the species can provide some hardcore action on light-medium tackle.

These sharks are often so abundant you almost wish they'd leave your baits alone. When running monster-baits for tiger sharks, I often have the baits get mauled by smaller blacktips, which is rather frustrating. However, if you ever want to get your money's worth, cast out a whole whiting on a large spinning rig and wait for the chaos! Blacktips will pick up just about any bait that is available. Most ideally whiting and skipjack are top choices but these sharks will not turn down much of anything that is fresh. I've even caught blacktips and other sharks on hardhead catfish!

Through all my years of shark-tagging research, the blacktips count for the majority of the sampling study. While many individuals swim down and get whacked in Mexico, I've had some strange anomalies. I remember landing a young mature blacktip that had been originally tagged by another angler. Due to a deteriorating tag which had been placed a couple years earlier, I replaced it with a fresh one and sent it back on it's way. Pretty cool that I recaptured a shark that someone else previously caught, huh?

Well that's not the end of it. Nearly one year later within one mile of the original catch site, I caught the same shark - AGAIN. To put that in perspective, this shark had picked up a bait and been caught (and released) three separate times. Talk about karma for that lucky guy - very cool! Once again the predictability about the habits and migration of this species often makes it an easy one to target.

I am already receiving a lot of bookings for March, April and May. I am really expecting a phenomenal spring season seeing how we dodged another autumn red tide. From now until summer my charter adventures will likely encounter bull, lemon, hammerhead, possibly tiger, and A LOT of blacktip sharks.

These are ideal for family trips, especially those in which parents are eager to safely get their kids hooked up on a shark. Quite often it is the trips which are mainly for the kids that are the most rewarding and enjoyable to take part in. There are educational aspects of each trip which also pique the interest of not only the young, but adults too. Each of my upcoming outings, with or without clients, should deliver a load of fun and countless surprises for me to write about.