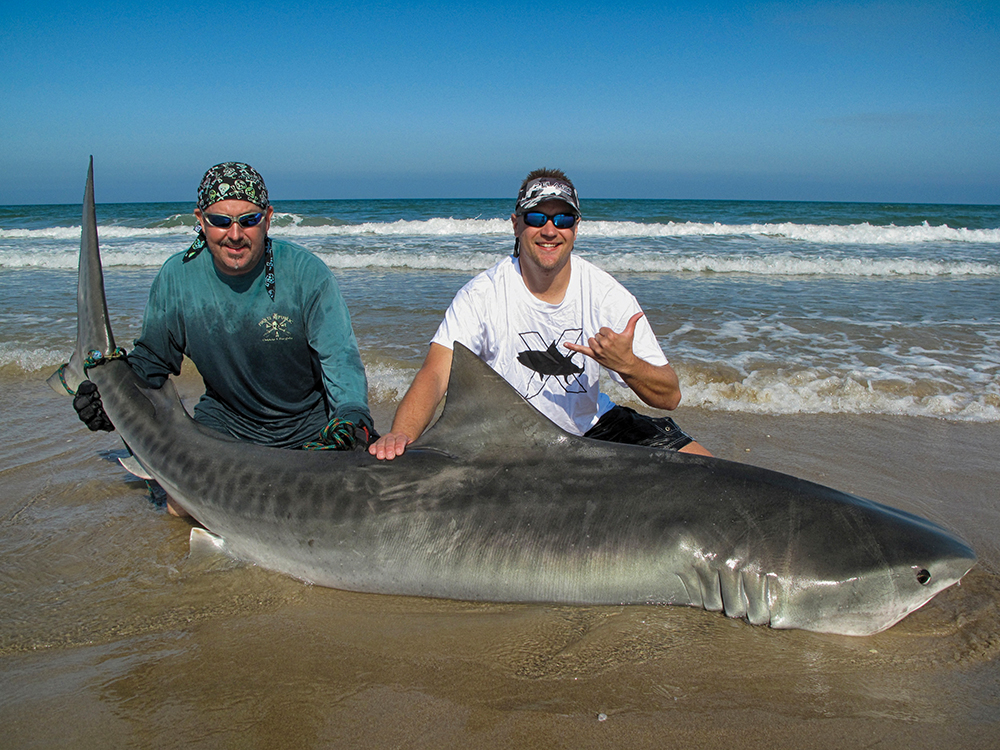 March is the earliest month we have encountered tiger sharks in the Texas surf.

The surf zone becomes very quiet during mid-to-late winter in terms of apex predator action, but that is all about to change. March is almost here and practically any day now, like a hibernating dragon finally emerging from his winter lair, the South Texas surf will come roaring back to life. The key to this dramatic revitalization will be baitfish, mostly mullet, making their way back into the surf as the waters begin to warm.

From an angler’s viewpoint, there are three basic categories of fish that inhabit the surf zone. You have the baitfish – mullet, menhaden, shad, and anchovies. Then you have what I term the middle of the gamefish class – seatrout, drum, redfish, jacks, and mackerel. Finally comes the apex predators – the sharks. Sharks are the ruling class; the only real threats to their continued survival are homo sapiens and larger sharks.

With all categories of fish moving inshore in early spring, there will likewise be a host of shark species taking up residence inshore. Here in South Texas we have a few more than a dozen different shark species that can be targeted from the beach. March is also the month when multiple mako sharks have been landed from the Texas surf.  Makos are extremely rare inshore and only a few elite anglers can lay claim to having landed one from the surf.

By late February the large sandbar sharks are finishing up their mating rituals. South Texas is a sandbar hotspot where mass aggregations form for mating. Tagged sandbars tell us they will return to the same stretch of beach year after year. Sandbars are considered a cool-water shark that can reach 200 pounds or more.  They have a hefty appetite and will feed readily on a variety of large and small baits. Not many beach anglers have landed sandbars, given that they only inhabit our surf zone during the colder months when angler participation is generally at its lowest point.

Sandbars are very aggressive swimmers and fighters, known to breach the surface when hooked. They also possess an unusual “crawling” ability when beached. This dangerous capability demands respect and they must therefore be handled with great care. Perhaps their general rarity and menacing ways is why they rank so highly with anglers. It is important to note that sandbar sharks are federally protected and must all be released.

Ultimately, the weather and water conditions will determine how the March sharking action unfolds. As we are in this transition into spring, we have yet to endure the onslaught of the April winds and large seas. Our waters have exhibited relatively good clarity and clarity is often a prime catalyst for triggering shark activity.

Aside from the scavenging bull sharks that will willingly inhabit turbid seas, most other species prefer cleaner, greener water. If present water conditions continue, March should bring lots of large blacktips to the surf and we often get our largest blacktips of the year in the spring. The large pregnant females roam the shallows taking in as much protein and other nutrients as they possibly can, and my spring charters will often include lots of blacktip action on casted baits.

Usually, a whole whiting casted out beyond first main bar is money. Sometimes the blacktips become so numerous as to be pests when running larger baits for larger species. Pound for pound, though, the blacktip is one of the most impressive sharks to catch due to their acrobatic ways and speed bursts during the fight. While regarded as one of the best eating sharks, I heartily encourage releasing the blacktips (and sharks in general) if not planning on harvesting for food.

Another highly sought-after species of shark for angling sport are the hammerheads. We have three different species that cruise the Texas shallows. The smallest of this family is the bonnethead. Bonnetheads can reach 4-feet length, though most mature specimens top out at 3-feet. Bonnetheads are usually encountered as by-catch for anglers trying for whiting, pompano, or drum while using shrimp or squid for bait. While not a large species, the bonnetheads are a cool fish to encounter. The biology of all the hammers is unique and a product of near perfect design after millions of years of evolution.

The next species of hammers we encounter in the surf are the massive great hammerheads – the largest of the family. We typically do not see “greaters” during early spring; they typically do not begin to show until May with the arrival of tarpon and southern stingray.

Another species of hammer we encounter in the surf is the scalloped hammerhead, which max out around 9-feet. With the lack of greaters this early in the year, we make up for it with the inshore abundance of the scalloped hammers. This guys are a blast to catch and much heartier in the release category than their larger cousins. Scalloped hammerheads will run very shallow and can be caught on casted baits the same as the blacktips.

It is not uncommon to catch fairly large scalloped hammers while targeting blacktips. Due to their small mouth compared to body size, they will take smaller baits very readily. I have observed that the best baits for the springtime scalloped hammers are whiting, pompano, and small slabs of stingray.

There’s little chance to mistake a scalloped hammer when they pick up a bait; they are speed demons and make impressive runs. Even the largest of scalloped hammers can be turned and brought to the beach after a few determined runs which, like the bonnetheads, make them good candidates for successful release.

Scalloped and greater hammers  are not highly-regarded as table fare, quite poor actually, and managing the landing activities as efficiently as possible to enhance release success is greatly encouraged. Hammerheads in general are the most fragile of shark species in this regard.

Perhaps the greatest beauty of seasons in transition is that you never know what will show up next. March is the earliest month I have caught large tiger sharks. Generally speaking, if the jackfish make their inshore debut early, the larger sharks will follow. This is the reason for the rare mako and early-season tiger catches.

Should the water warm earlier than normal, we are also likely to see the early arrival of bull sharks. The early arrivers tend to run in the 5 to 6-foot range and become steadily larger as spring trends toward summer.

Whether your motivation is putting a kid on an energetic blacktip or hoping to land a bucket list sandbar, early spring is a great time to be on the beach. My charter schedule is filling up quickly with dates in August already booked. Please don’t wait. Get with me soon and I will do my best to work you into the schedule.

Be safe, have fun, and live the adventure!