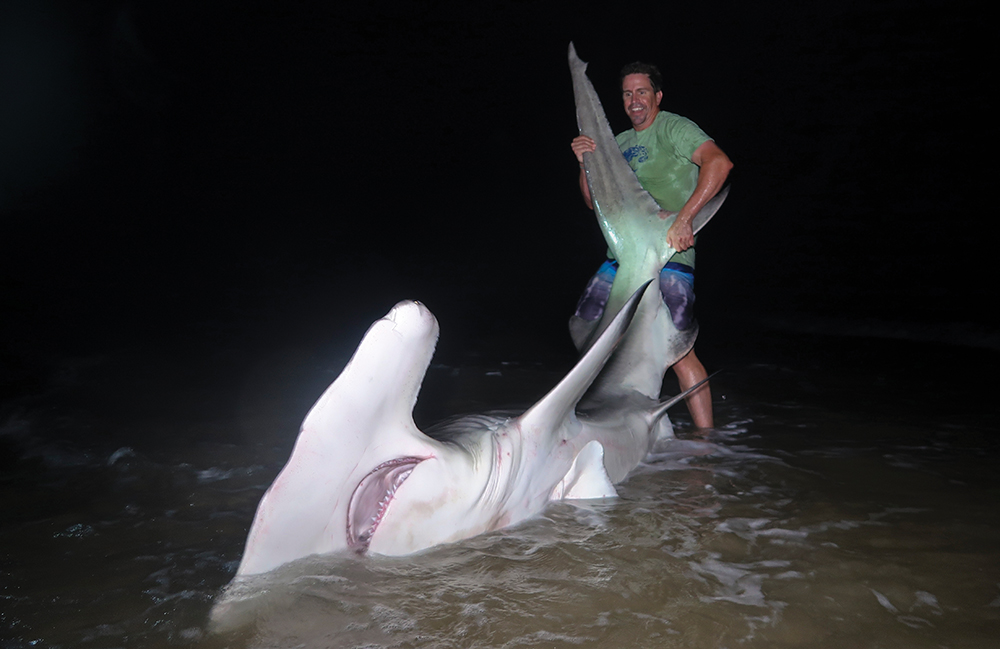 This is a tale of a shark fishing adventure that occurred in mid-June this summer. First-time client James Mudd had been eager to book a trip with me for nearly a year. James wanted a family trip, and with his two kids out of school for summer, June was the perfect time for a two-day mid-week fishing adventure. The group included James’ brother, sister, and cousin. This dynamic fishing family are no strangers to saltwater, with plenty of bay and offshore experience, including the famed Bisbee’s tournaments, but this was to be their first go at big game surf fishing.

We met in the morning and caravanned down the Padre Island National Seashore. Fishing had been very good but recent reports were cause for concern. A few days earlier, rumors of a coldwater upwelling had begun to circulate. I could only hope that with generally light wind in the forecast, the cold-dirty water would make its way offshore and not envelope the surf zone.

As we drove the north end of the beach, the surf was relatively calm but with no clear water in sight. We continued driving south. Ten miles brought no improvement and we continued ten more. Finally we started to see emerald green water creeping closer to shore, even though still roughly 500 yards out. This was the hand we were dealt and all I could hope at that point was to somehow make something happen for this eager group.

Setting camp, my main objective was to get baits out before the wind and surf picked up as per the forecast. Come early afternoon, I had kayaked out at least 600 yards and placed three fairly large stingray baits on 80W class reels. The reason for long drops on big reels was to get baits out in the better quality water.  With the wind and current both forecast to increase, I had to run baits at an angle into the direction of the current to help hold them in position. So, in reality, the lines were probably stretched 800 yards.

No matter my track record of recent successful trips, I am always anxious for that first fish and it didn’t take long. One of the baits was hit by a healthy blacktip that was landed and released. Not a monster as I had hoped, but a shark, nonetheless. By now the wind was picking up making kayaking much more tedious. I kayaked a replacement bait and we were set again.

A short time later another bait was picked up. Another blacktip. As the afternoon wore on I was privately pondering whether there were any larger beasts about. We landed another pair of blacktips just as the sun was beginning to set. Back in the kayak, I set about making sure we had a fresh set of evening baits, praying something larger than a blacktip would find them.

Shortly after sunset one of our mid-range rods was hit – another blacktip. This one caught by James' sister Missy turned out to be a recapture of a previously tagged fish. We recorded the data and released it successfully. At that point I was happy but my anxiety was growing. As much effort as I had put in, the reward thus far was only a slew of blacktips. But the biggest baits were still out deep.

With all the optimism we could muster we could do nothing but wait it out. A couple hours passed and finally that beautiful sound of one of the large reels screaming split the night. I immediately jumped up on the rack. The shark took the bait rather gingerly at first but did not hesitate to light the afterburners. I knew it was a big shark and by the way it was acting I was convinced it was a hammerhead.

I got James on the platform and prepared for battle. This was HIS shark, the one he came for. The shark continued burning line; after about five minutes it had probably dumped another 200 yards and still swimming running for Cuba.

I coached James on the finer points of a methodical fighting technique, keeping everything smooth and fluid is very essential with hammers. I don't slam the drag down like some people, it seems to only anger them and encourage overexertion, which greatly reduces the chance for a clean release. When the shark wants to turn, it will.

True to form, after about twenty minutes James had it turned and was gathering line as it swam up and down the beach.

Then the far left rod went off. First thought was the hammer had swum into that line and was tangled and dragging it. We backed off the drag slightly, deciding it best to leave it alone for a while, continuing to focus on James’ fish.

After another 15 minutes or so, James’ fish was swimming strongly to the south. The distance between it and the other rod was growing, yet the other rod was giving line. It didn’t take long to recognize it was not being dragged by James’ fish and we indeed had a double hookup on our hands. I got James' son, Holton, up on the rack preparing to battle the second fish. Two large sharks on at the same time. You could hardly ask for anything better but landing both of them would involve a lot of work and a big dose of luck.

As fate would have it, Holton's fish swam in and up the beach up to the north. Meanwhile, James’ fish was finally swimming straight in and still well to the south. Good news was that any chance of the two tangling was eliminated. At that point It was only a matter of which would be landed first.

I knew James' shark was a hammer and had priority due to how fragile they are, and we wanted successful releases with both. Luckily, within only a few minutes, Holton's shark was in the first gut with the two sharks spaced a couple hundred yards apart. While not knowing what species Holton’s shark might be, I knew instinctively we had to land and release it as quickly as possible and then concentrate on the hammer.

I ran up the beach to leader Holton's shark with half the Mudd crew in tow, the other half still with James at the camp as he continued to fight the hammer. Holton’s mystery fish was stubborn at first but with steady pressure on the leader I succeeded in guiding it to the sand. Only then did I realize it was a tiger, and a pretty solid one at that. Tigers are a definite favorite of mine, and though I strive to land one every trip, the truth is we get only a few each year.

The Mudd crew pitched in and we made precise work of removing the hook from the tiger, measuring, and hurriedly snapping photos. Holton was ecstatic with his smile wider than the moon. His male tiger would have topped 10-feet had its tail not been shortened due to prior injury. Still a lifetime catch for the young man; we accomplished the release and hurried back down the beach to assess the situation still underway between James and the hammer.

James' hammer was swimming up and down the gut. We strategically waited for it to get in front of the truck before I headed out to grab the leader. As with Holton’s shark, the crew did their best to keep lights trained on the beast to aid my efforts and safety. What happened next was a godsend, James’ hammer swam straight into the bar and nearly beached itself. I managed to remove the hook in a matter of seconds as the Mudds all shot photos while I ran back for the measuring tools.

We got a measurement of over 11 feet and a ton of killer photos as the moment of truth approached… being able to accomplish a successful release. I walked her out and guided her into the current. She felt strong and was moving. I pushed her off and she swam OK for a second or two and then made a U-turn. I quickly hopped around and grabbed her by the dorsal and pushed her off again into the darkness of the great Gulf of Mexico. She swam strongly and we all celebrated.

The amazement of our accomplishment was overwhelming to say the least. A double hookup and successful release of a large tiger and even larger hammer. For the Mudds, that slew of blacktips could have easier gone into their memories as a very successful first sharking adventure. Adding the tiger and the hammer pushed it way over the top.

What a great trip with a great family!