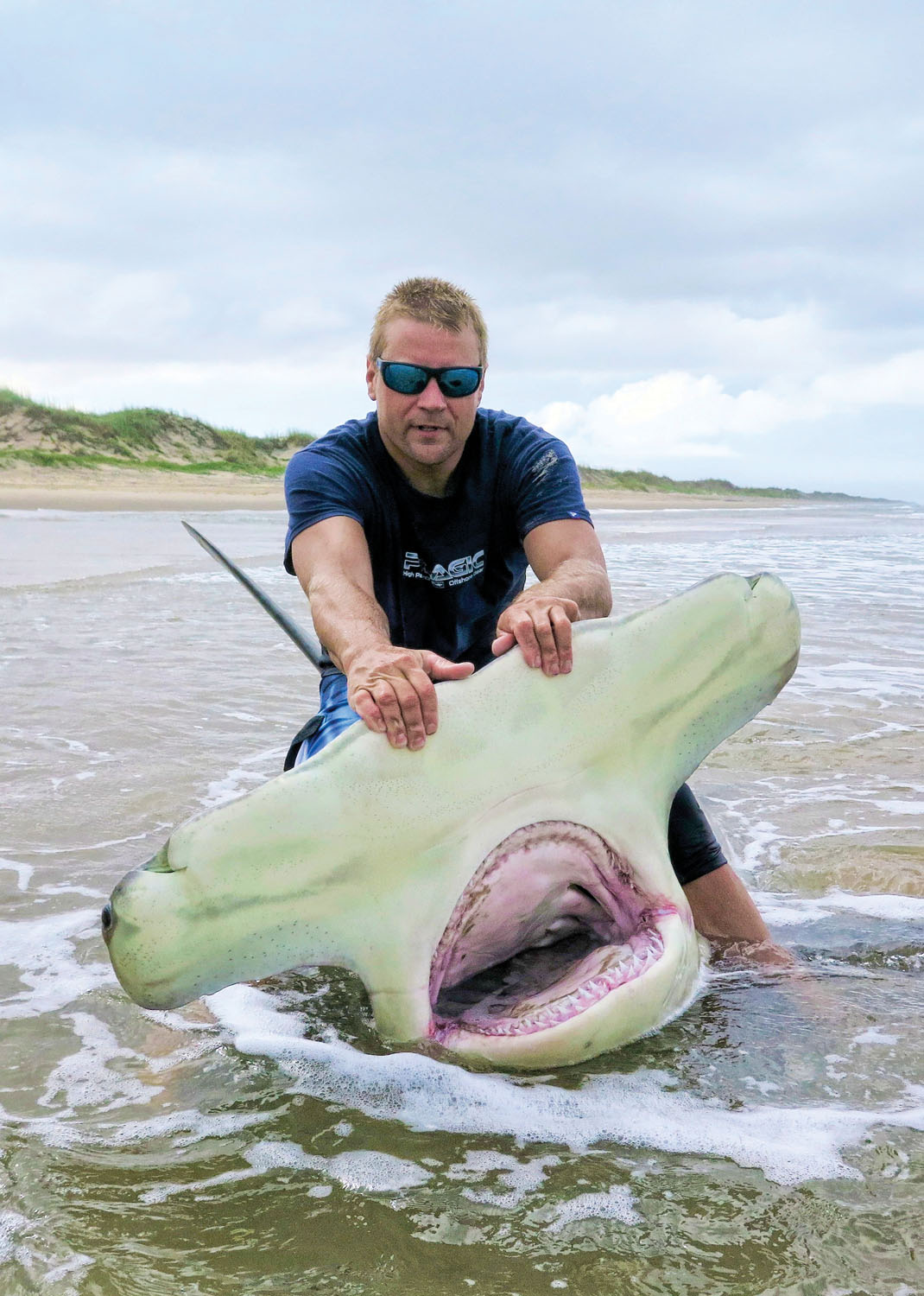 And this is why they’re called great hammerheads.

Fishing, to me, is about chasing dreams. Perhaps that would explain my obsession with shark fishing. Sharks are some of the most dominant and largest of ocean predators, and whether on a personal adventure or running an exciting charter, nothing fuels the obsession better than landing and releasing a giant. Over the past decade I have accomplished this with several incredible specimens that had potential to surpass Texas state records for the species, had I hauled them to a weigh-station. A staunch conservationist, a successful release is worth more to me.

Anytime conditions align to what I call optimal, I will be on the water. If I am between charters and there is a perfect weather window, I will not hesitate to take to the water alone if none of my shark angling friends can make it. Catching a big shark is my “high” and no other feeling compares with landing a 10-foot fish, or being awakened at 4:00 AM to the screeching of your largest reel being stripped by a massive tiger shark.

Such was the case last June when I was granted a rare and special experience – a monumental shark landing that has had great impact on my life. This story has not been told publicly, until now. I call it Oz’s Hammer.

June 2, 2016 – I set out for a three-day shark trip. Surf conditions and water clarity were top notch. Bait had become abundant as were the predators. The initial plan was to roll down the beach solo and meet up the following day with my good shark buddy Scott Nelson. Arriving at a promising spot that first morning, I made camp with jack crevalle storming the beach and quickly landed an eighteen-pounder. Fresh jacks are some of the very best big-shark bait there is. Things were off to a great start.

I prepared a set of baits as the probability of storm development increased. My plan was to deploy the evening shark baits earlier than normal, while conditions allowed. By 1:00 PM, with weather worsening, I decided to run the baits out, the morning’s fresh jack among them. I placed the whole jack on my 80W about 600 yards off the beach. The reel held more than a mile of heavy braid. I also placed two large baits out on 50W outfits. With the big bulls around, I ran the jack out hoping to tag and release an 8-foot-plus specimen. Fishing solo is no longer a big deal to me, having landed and released many large sharks in this fashion. Roughly 30 minutes after placing the final bait, the big jack was picked up, and things were about to get interesting!

The 80W was singing. I hopped up on the truck rack and strapped in. Thinking it was a large bull, I let it run for a few seconds, expecting it would slow soon. Instead, the shark began to speed up. The line was getting smoked off the reel as I hung on. At that very moment I knew instinctively what I had hooked – little did I know the size of this beast.

Strapped in and hanging on, I watched as line continued to disappear at an alarming rate. The thought of attempting to turn it never registered, the fish was on cruise control for the first 15 minutes. For the first time in my shark angling career I grew nervous. I was down to a quarter spool on one of the largest and most powerful reels you can buy. I had the drag hammered down but the fish continued toward the horizon. Thunder began to resonate yet the skies directly above were still clear. Looking around at the ominous clouds and strapped into a monster that was destroying my reel, I became enveloped in a most surreal atmosphere.

Roughly a half hour into the fight, and with nearly a mile of line dumped into the Gulf of Mexico, the fish finally began to run out of steam. It couldn’t tell yet if it wanted to continue offshore, or yield to the pressure and swim inshore. The fish makes that decision, but in its own good time. Lucky for me it eventually turned.

I slowly began the laborious process of guiding it to the beach. At each sandbar it hesitated and turned for another short burst offshore. As it approached the second sandbar, I was able to observe its enormity and began to plan how I might be able to manage a solo release.

Working alone, the ultimate objective of placing a satellite tag on the fish was out of the question, and I focused on the quickest release possible. She bottomed out on the first sandbar and turned on her side, down-current about 200 yards. With my GoPro rolling I knew this would be the most challenging release of my career.

I was off the truck in a flash and running full speed, tail-rope in hand, fighting to avoid the hypnotic effect of its size, and the daunting task ahead of me. The huge great hammerhead was on its side in the wade gut and needed help. I got her righted and stationary still in record time. No time to dash back to the truck for tagging and measuring tools, I would sacrifice all that so this fish might live.

Luckily, the hook was lightly imbedded in the corner of the jaw and easily removed. Within seconds I began the task of dragging her to deeper water and swimming her out. Despite its massive size everything was going surprisingly well. I had her head into the current in water deep enough to swim, but she was strangely lethargic.

I continued walking her into chest-deep water but she simply had no kick. For thirty strenuous minutes I swam with her, applying every revival technique in the big shark textbook. Having released tiger sharks of 600-700 pounds without problems, this shark was just too far gone. I continued until I was utterly exhausted. The shark unfortunately would not survive.

Releasing a Texas hammer of this size is unheard of, and with good reason. Though possessing exceptional strength, hammers are surprisingly fragile and stress out much easier than most other species. Fact of the matter is, not many great hammerheads longer than 10-feet survive to be released from the beach. I knew this going in but still gave it my absolute best effort. The irony of it is that even with a skilled helper I believe she would still have died of exhaustion. That’s how they’re programmed – to fight to the death. Any other species of that size would have made the release.

In the end, the loss of this fish was terrible but, in a sad way, almost inevitable. I knew the chances were slim to none to begin with, and I have had to live with that.

After I could do no more for the fish I had to regain my own strength and composure. When finally able, I sat for a few minutes to admire its biological excellence. The first passing vehicle stopped and only then did I considered taking a measurement and photos with this amazing creature. With a slightly nubbed tail, it taped exactly 13-feet with tremendous girth. Probably in the 800- to 900-pound range, one of the largest sharks caught out of Texas surf in the past couple of decades.

While this catch was very special to me, I wanted to keep it off social media for a while as I had no interest in promoting a large shark that does not survive. Lots of folks simply would not understand all aspects of the situation.

After a few days I sent a couple photos via text to a select group. Somehow, even with the best of intentions, the images leaked to social media and went viral. There were good and bad comments as you would expect. Facebook removed it after several thousand shares, and it was later learned from a media source they removed it in belief that poaching or other illegal activities might have led to the shark’s death. Nothing could have been further from the truth.

Given the social media chaos, I waited a year to release the story. That’s how precious that great hammer has been to me and I hope it demonstrates my respect and dedication to conserving all the shark species I pursue and admire so greatly. I will continue to search and anticipate the next such magical moment in my fishing career, even though that incredible fish could never be replicated, one can still anticipate for the next great life-altering encounter.