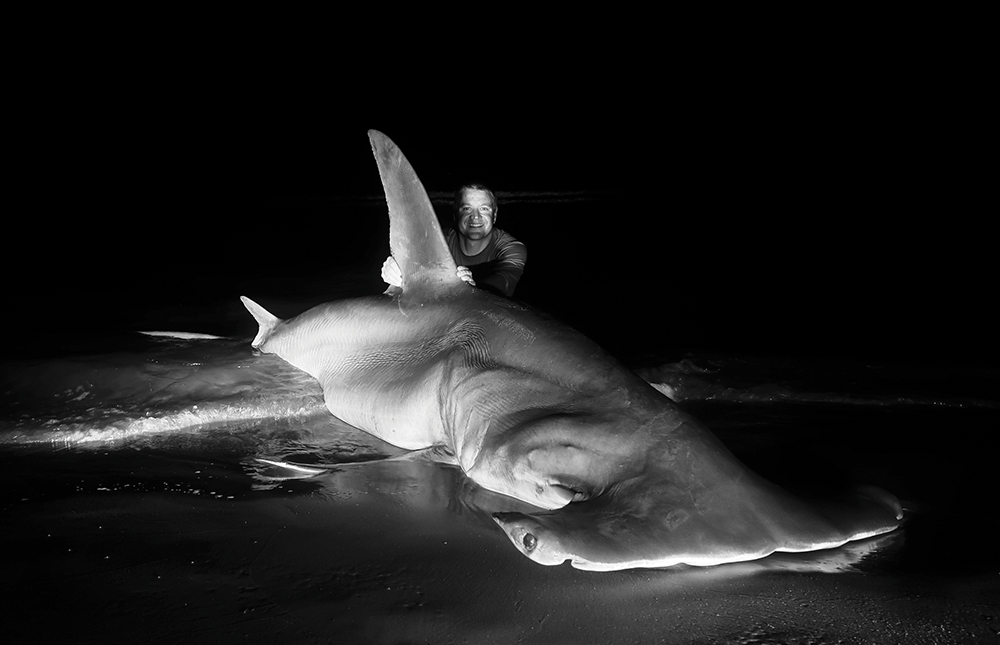 The head on this hammer was just incredible.

Many people dream of being rich and famous, or having exotic love interests. Not me; sharks haunt my dreams. I’ve dreamt of hunting sharks at the beach, having to steer a kayak over towering mountains of water to deploy my baits. Twisted images of sharks cruising my neighborhood’s flooded streets and ditches color my nights. Evolution’s toothy monsters also play an integral part in my daily life. I truly treasure pursuing these beasts.

This summer, shark fishing in South Texas essentially shut down. For over a month during peak big-shark season, the pandemic caused officials to close most all beaches from Port Aransas to Mexico. Then Hurricane Hanna delayed the opening of Padre Island National Seashore even longer. When authorities announced the park would open on August 20th , I had a chance to hit the beach before the masses showed up.

My “first trip back” had a purpose. I needed to place satellite tags in some tiger sharks for the Harte Research Institute. Late-August being prime-time for tigers, I knew the catching might be good. I opted to stay closer to the north end of the park and fish spots that have been productive in the past, though I don’t fish them often. After identifying what I consider an optimal spot, I set out some baits.

The shark bite on summer days is usually slow, and this was no exception. I expected this and also figured I’d get a bite around dusk. Sure enough, soon after I deployed my night-time baits and the sun began to set, a tiger moved into the spread and picked up a bait, biting just shy of the hook. Ten minutes later, it found the second of three big baits and gulped it down deep enough to taste the hook.

I got the first tiger in fairly quickly, and as I was about ready to lead it over the inside bar, something picked up the remaining big bait and smoked the reel. Instantly, I knew it was a big hammer and did my best to quickly land and tag the tiger. While I completed the process within no more than ten minutes, the hammer dumped roughly 400 yards of line off the other reel. After the release, I jumped back on the platform and strapped myself to the most destructive Kraken of sharks.

I settled in for the fight of my life. Nailed to the rail of the platform continuously for over an hour, I finally managed to turn the fish with my 80W. At that point, I looked down and saw an exposed spool hub with nearly no line remaining. The shark swam in a couple hundred yards, then circled back out, repeating the process at least three times, failing to completely empty my spool, though it came perilously close. After the third run offshore, the fish began to cooperate.

Over two hours into the fight, the behemoth shark started to swim consistently in, but at least 1200 yards of water still lay between us. I fought the good fight, eventually leading the beast closer to shore. With things going smoothly, I became convinced I’d win the battle, but at roughly 600 yards out, my opponent finally stopped swimming in, then began to exhibit odd behaviors. For the next few minutes, I felt mere flutters. Having seen big hammers do this before and die during fights, I feared the same might happen to this fish.

By around 10:30 pm, I could barely move the fish with a locked down 80W and torqued pre-sets. Desperate, I turned on the rack’s lights and went out in the kayak to try and find the float and leader, hoping to attach another short float near the drop for buoyancy, like I’ve done before to get sharks off bottom. After searching for about twenty minutes in the eerie darkness, I found nothing. So I came back to the beach, climbed in the rack, put the reel in low gear and cranked with all my might.

After a few minutes, I winched the brute free from the bottom, but could only gain about ten feet of line per minute. This would lead to a long night indeed. After a relentless effort, I finally dragged the shark to the first sand bar, only to discover it had died during the fight. This is unfortunately common with giant hammerheads, the most delicate shark species we encounter. Being solo, I couldn’t wrestle the dead giant off the bar; I had to utilize my truck to pull her up to the edge of the beach. She was absolutely massive, measuring 14’ - 8” length with a 78” girth!

Estimates derived from various formulas place the shark’s weight at about 1,000 pounds. I’ve achieved almost every surf-sharking accolade I could dream of and have personally released perhaps a thousand sharks at the beach. While many giant sharks have been caught from the Texas surf over the decades, I can find no evidence of a larger one, though some longer specimens came from the Port Aransas jetty area many years ago. My monster also ranks among the largest surf-caught sharks in the entire Gulf of Mexico.

I made sure the situation would end the best way possible for other feeding wildlife and scientific research, collecting flesh for genetic sampling at the university. Anyone who knows me knows I do not kill sharks intentionally, particularly large species such as bulls, tigers, and hammers. My adult life has revolved around chasing these monsters in the Texas surf for the past 20 years. Happily, I did discover this mega mamma had no pups growing inside her. In all likelihood, she gave birth in June or July. Her litter could have numbered as many as fifty. This fact makes me feel a little better about the situation, though I do experience bittersweet emotions over the outcome.

The sad truth is most extremely large hammers do not survive catch and release. I’ve told others who dealt with giant sharks dying after they caught them to remain proud of their catch. I now have to tell myself the same thing, despite the lingering negative feelings I have about the circumstances.

Catches like this cannot be publicized without giving credit where credit is due. This shark ultimately picked up and ate a whole large ray, with a single Catch Sharks 24/0 hook in its head, attached to an Incognito Acclimation leader. The workhorse reel was a standard EXW 80W Avet with half a spool of 150 lb. braid backing, the top half being 250 lb. braid. I purchased the reel from Rocky at Roy’s Bait and Tackle, to add to my 80W arsenal, right after I had a 50W dumped by an unseen thief. The rod in the setup was constructed from a Jawbone 1053 blank, handcrafted by the great Roy Guerra. All these components helped make this catch possible.

I will be fishing the rest of the year, as long as our beaches are open. I’m booked pretty solid through the first half of October, but am currently taking reservations for the rest of the fall and winter, through my website: oceanepics.com. The 80,000 miles I’ve put on my truck the past four years have created an unreliable mess of sorts, so I’m in search of a vehicle sponsor to continue pursuing my dreams and exploring the mysterious world of our coastal sharks.