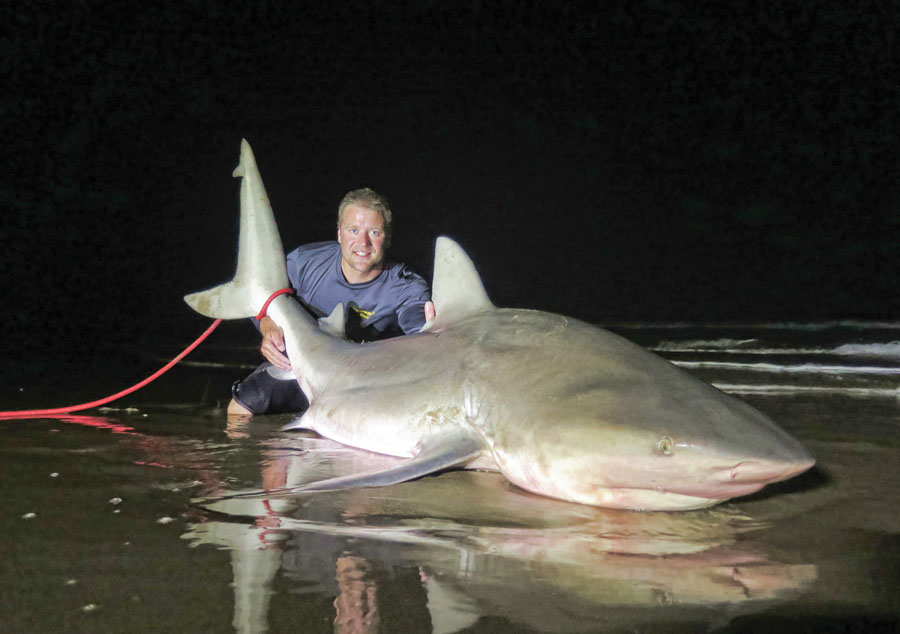 It has been a while since the scream of a shark reel rang from atop my truck in the dark of night. Sure, we were blessed with a great number of respectable shark catches through the spring of 2015, however, nearly all of that action occurred during daylight hours and this will forever be remembered as the year of the hammerhead. In beach terms, copious landings of scalloped and greater hammers were made from South Texas beaches, and the prevailing daylight provided incredible photo opportunities. There were also a nice handful of stud bull sharks landed, more than your typical year. Once again, all of this having to do with near total absence of nuisance sargassum seaweed on the beach. Even now, we have seen very little if any weed on most South Texas beaches. Good beach conditions, plus a lot of anglers taking to the surf for toothy giants equals impressive catches. As we make our way into early summer things were bound to change. Daytime activity has slowed and the night has come alive on the sands of the Coastal Bend.

April and May were some of my busiest months yet in the charter business. Many new and regular clients wanted to take to the surf chasing adventure and dreams. Conditions remained promising, other than more rain than we wanted during much of May. I had purposely scheduled two weeks off to allocate for much needed personal sharking adventures. Traditionally, the time around Memorial Day has always been a sort of kickoff for "big shark" season. I therefore planned my trip around a 2-3 day period that coincided. It turned out that conditions were mediocre, but not as tough as the wind and rain that had ravaged the surf during much of May. My time is precious so I really wanted to make sure it counted.

I made it down on Friday morning at sunrise for a solo trip. The swells from earlier in the week were still showing yet were forecast to dwindle. I can say I was honestly excited regarding the prospects. There had been a lot of sharks in the area and there were no reason for them to have left.

That morning I scouted the beach and set up at a promising area which had a unique structural aspect. Here, the second gut makes what we call a "pinch and pool up" configuration. Sharks and other gamefish find their way into these pools and usually stick around for a bit before finding a way out, over one of the sandbars.

My only downfall was the lack of fresh bait. I had brought a relatively fresh stingray and ran it out. Initially, it got blasted later in the morning. Leaving it out, I had a large blacktip shark pick up the remnants and get hooked. Meanwhile, another rod went off as I was reeling in that first shark. Not long and I would have two sharks on the beach from a double hook-up. Both were blacktip and, while not monster man-eaters, they are always a load of fun to catch. Both were tagged and released. The afternoon began to slow and stayed quiet until around 4:00 pm. Then, as mysterious clouds began to form inland and hide the sun, the action began to pick up once again.

I continued to have small sharks destroy my baits without hookup and finally one wasn't so lucky and I was able to get a hook into it. Reeling that one in, I had another rod go off. Another double!

Both sharks were again blacktips, in the 5-1/2' range. This was a good day already but I knew there had to be bigger fish prowling. My bait stocks were bleak, especially to entice a large specimen. My good friend Kevin who had been practicing to perfect his fly-fishing skills had caught two large jack crevalle on the drive down. Coming to the rescue, Kevin handed me some absolute rockstar baits for the evening and that was a game changer. Hitting the beach as hard as I have through the spring season, needless to say I was out of jackfish in my bait freezer. I happily accepted Kevin's delightful gift. Think kid on Christmas with an unexpected surprise–that kid was me.

The day had dwindled into late- afternoon with just a little over an hour of daylight remaining. I got to it and rigged up two "big-boy" baits, three-quarters of a bloody jackfish each. Even I would eat this if were trapped on a remote island for weeks. With the wind forecasted to pick back up overnight I prayed the time had come.

I deployed both baits via kayak, roughly 500 yards. I even replaced two "close" baits with fresh skipjack and whiting. And the waiting game began. Darkness fell and the moderate sea breeze kept the bugs off while I prepared dinner on the grill. Anticipation was in the air, but tempered with knowing that I have also been disappointed on so many occasions when everything seemed "just right." Would this night be different? The atmosphere had that eerie feeling, and for Friday evening on a holiday weekend, I was surprised to be one of the few anglers on the beach with baits out. Then, roughly around 9:00 pm, the calm and relaxing beach life got real interesting.

One of the large jackfish I had out got picked up. I kept a close eye on the rod and hopped up on the truck. Within a few minutes it began moving offshore. I got the rod and set the hook–BIG FISH!

This is what I'm talking about! Even the scalloped hammer I'd caught a couple weeks earlier put up less fight. This fish was all mass...all power. I knew it was big by the way it fought; seeming to swim effortlessly offshore with a 20-pound bait in its mouth and dragging a large weight, not to mention the 30-pounds of reel drag on my end. I knew I'd fought much larger fish, but this was a quality specimen, my heaviest for the year thus far. Eventually I was able to turn the head and steer it inshore. It would have its way at times, turning back offshore when it desired. Nonetheless, I managed a smart fight. Then about 20 minutes into battle the shark was on the second bar but would not come over. A few more minutes of brute force and the fish gave in and swam over the bar. Another couple minutes and it was over the first bar. I jumped down to go leader the fish, expecting a tiger, only to be that kid on Christmas again with another surprise gift–a massive bull shark.

It took everything in my power to get the shark beached with the tail rope. Until then my largest bull was just under 8-1/2 feet and this one appeared longer. The final taping revealed 8-feet 7-inches. This shark had a massive head and large empty body, telling me she had probably dropped her pups quite recently. I was able to get a few photos and during the release noticed one of my inshore rods was going off.

After a couple of minutes I jumped up and started reeling in the shark that was still on there. The shark had swam down the beach and I had to bring it back up into the current. While not as large as the previous, I knew it was not a blacktip. About 10 minutes later I had it over the bar and I once again went out to leader my catch. And yet again, the Summer-Santa delivered to this wide-eyed kid as I noticed the fish is a decent lemon shark–first of the year from a Texas beach, that I am aware. I managed a couple of quick self-timed photos and tagged the male and let him go on his way. What a night!

Well, the evening wasn't over, yet. It was about 11:00 pm and I still had two baits out. It was but 15 minutes after releasing the lemon that I got hooked up on the other inshore bait, this one turned out to be another a blacktip. Pretty cool, still.

And then there was one. The remaining bait was the other three-quarter jackfish which had been sitting patiently. I was so ecstatic about the catches of the night up to that point, I thought there was no way I would hook up again. Well, Summer-Santa returned with the final and biggest present of the night!

The last remaining bait would finally get picked up. I jumped up and got harnessed in. The feeling was surreal. The wind had increased to the point of making humming and whistling noises with any fixed object nearby. Being hooked up in this dark, magical environment seemed nothing short of an adventure movie–better yet, one of those heart-pounding dreams you never want to wake from. I was strapped to the reel atop my truck with several hundred yards of line between me and the final beast of the evening.

Initially, this shark took line fairly consistently as it ran offshore. My gut reaction was that I was fighting a large tiger shark. While having caught a handful of tigers, it had indeed been a while since my last, but the way it was acting and fighting was textbook tiger. I managed to get it turned and moving toward the beach. Like the first shark, it would still do as it wished whenever it desired. Ultimately, this fish would swim in for the last portion of the fight. However, it would NOT come over the first sandbar and fought stubbornly swimming up and down the gut. I was still confident it was a tiger. Finally I got it over the first bar and go down to grab the leader.

Expecting a wide head and tiger stripes, I was presented with the biggest surprise of the night–a greater hammerhead.

While this hammer may not have weighed as heavy as the earlier bull, it was a good deal longer. With tag gear and camera already setup I made short work of tagging and releasing this mesmerizing creature. To have three large sharks caught off the beach in just as many hours is an overwhelming feeling. For a minute, it seemed as if my mind and soul had escaped this realm and been transported back to the shark-filled era of the 60s and 70s.