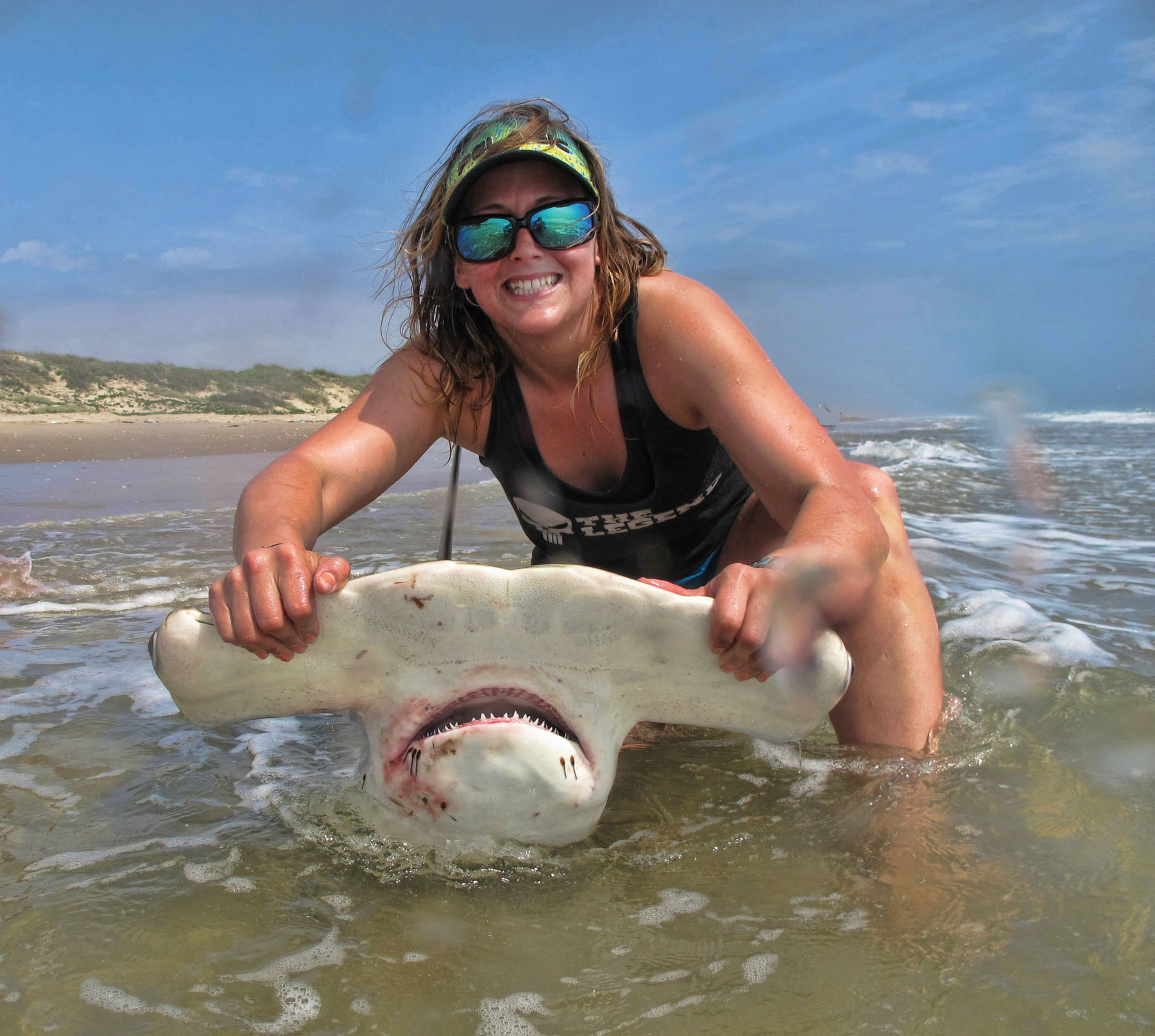 Dani Zirkel preparing to release a scalloped hammerhead.
After years of enduring brutally frustrating amounts of sargassum in our surf zone, 2015 has been most kind to coastal bend surf anglers. Thus far, this has been the first spring season in the past fifteen of my heavy surf fishing career in which the beaches of south Texas have not received a lick of the menacing weed. In return, we were offered a unique opportunity to fish the surf in what is usually hard or impossible conditions during the prime months of April and May. The results for many anglers were nothing short of spectacular. Many large and impressive sharks were caught and released by countless friends, charter clients, and yours truly. We were able to see the scalloped hammerheads run the beach in great numbers this spring, something Capt. Billy Sandifer had always talked about but very few modern-era sharkers have been fortunate to witness. I couldn't help but consider this phenomenon to be more myth than fact–until now.

Spring and fall are usually the most productive seasons on our beaches with multitudes of species moving in or moving out in search of prey. There are times when a single feeding frenzy can include a considerable list of "top of the food chain" species. The problem, for surf anglers, is that we are usually covered up with huge incoming mats of sargassum. This arrival sometimes appears as a mirage, a small island, inching its way toward the sand. In addition to the absence of sargassum the past few months, we had exceptional water clarity and light-moderate winds to add to the formula of productivity. With our great fortune this past spring we were able to experience and participate in the fishery on its grandest scale. Nearly four or five days out of each week allowed for some sort of fishing opportunity, something that has not been seen in the springtime the last two decades. Other than the anomaly of monsoon rain and random fog, spring has been just phenomenal.

Many anglers have been taking advantage of the rare weed-free conditions, especially those who participate in the Texas Shark Rodeoa year-long event sanctioned by Sharkathon. The "rodeo" has a research intensive premise and is conducted with all the best possible intentions. Sharkathon in conjunction with the Harte Research Institute located at Texas A&M University - Corpus Christi, work together in getting tags out to willing anglers for shark study. Like the Kayak Wars tournament format, submissions for this online event are through the website and offer a points-based system for species and size. While the only prizes are bragging rights, there is a great deal of interest for the Shark Rodeo, especially with the younger and middle-aged crowd. The downside is that it has heavily populated our normally desolate beaches with large shark fishing camps stacked on top of each other, many of those being weekend warriors from out of town. Imagine the chaos of Sharkathon, but not just one weekend of the year, but virtually every weekend!

Getting back to the positive aspect of this unique tournament, the large amount of anglers that have taken to the water this spring have produced astonishing results. The vast majority of sharks landed by these individuals were tagged and released in the name of science. While the blacktip was the species landed in greatest amount, there have also been dozens of both scalloped and greater hammerhead sharks and a handful of stud bull sharks weighing up to 300lbs and more. Normally these catches would not be possible in traditional weed-infested waters. With each passing week, substantial catches were made in and throughout the month of May. Interestingly enough, while we were joyous about the presence of the hammerheads, we did not see a tiger shark hit the beach until May. With the absence of weed there should be plenty of good sharks landed through the first part of the summer.

Aside from the always exciting and popular sharks, there have an exciting variety of other species. Jack crevalle have been fairly plentiful as they typically are in spring and fall. While they were not in huge numbers as we have seen in the past, they were around and consistent. Red drum also got a late start but showed in fair numbers and were often sight-casted from the beach. A really cool event that we were able to witness as well this year was the sheepshead migration into the gulf to spawn. Due to the absence of sargassum and almost gin-clear water, you could see schools of sheepshead traveling the guts and on the bars the entire length of Padre and Mustang islands. I also stood on the Port Mansfield jetties watching literally thousands making their way to the gulf one afternoon. There was a day in early-April when people actually caught more sheepshead than whiting. Very cool!

More cool surprises were landed by lucky surf anglers. Good friends James Clark and Dani Zirkel who have had one heck of a spring with astonishing catches of scalloped hammerheads and big bull sharks, also managed another unique catch. While shark fishing, they landed a 53" cobia from the surf which was interestingly enough released–conservation at its finest!

Late spring is typically a time when cobia can be caught from the beach. Looking back, in April of 2003, my largest cobia ever (that came up to my neck while holding it vertically) was caught on a shark bait as well. This year, I had a large cobia surprise me and then follow my kayak on the third bar while running a shark bait. Another very impressive springtime catch was from one of my charters. On a casted bait going for reds and jackfish, John Pettyman had an experience of a lifetime hooking into and landing a thirty-five pound smoker king–definitely an oddity off the beach. This fish too was successfully released by the decision of the angler!

Where does this leave us for the rest of the summer? Historically, the weed has always tapered off along southern Texas beaches around June. Does this mean we still won't see any until possibly the fall? Or does this mean the inevitable has been delayed and we will eventually get hammered by this floating nuisance? Only time will tell but educated predictions are calling for much of the weed to wash in around the Yucatan and Caribbean leaving us free and clear.

It is important to note that while sargassum wreaks havoc on surf fishermen, it is a unique set of biomass that is habitat for hundreds of species of life, from plankton-sized crustaceans to the largest of mahi. The small prey seeking cover under this biological flotsam attract all top predatory species of gamefish. While we can't have the best of both worlds, at least for now, surf fishermen are certainly the fact that there is none.