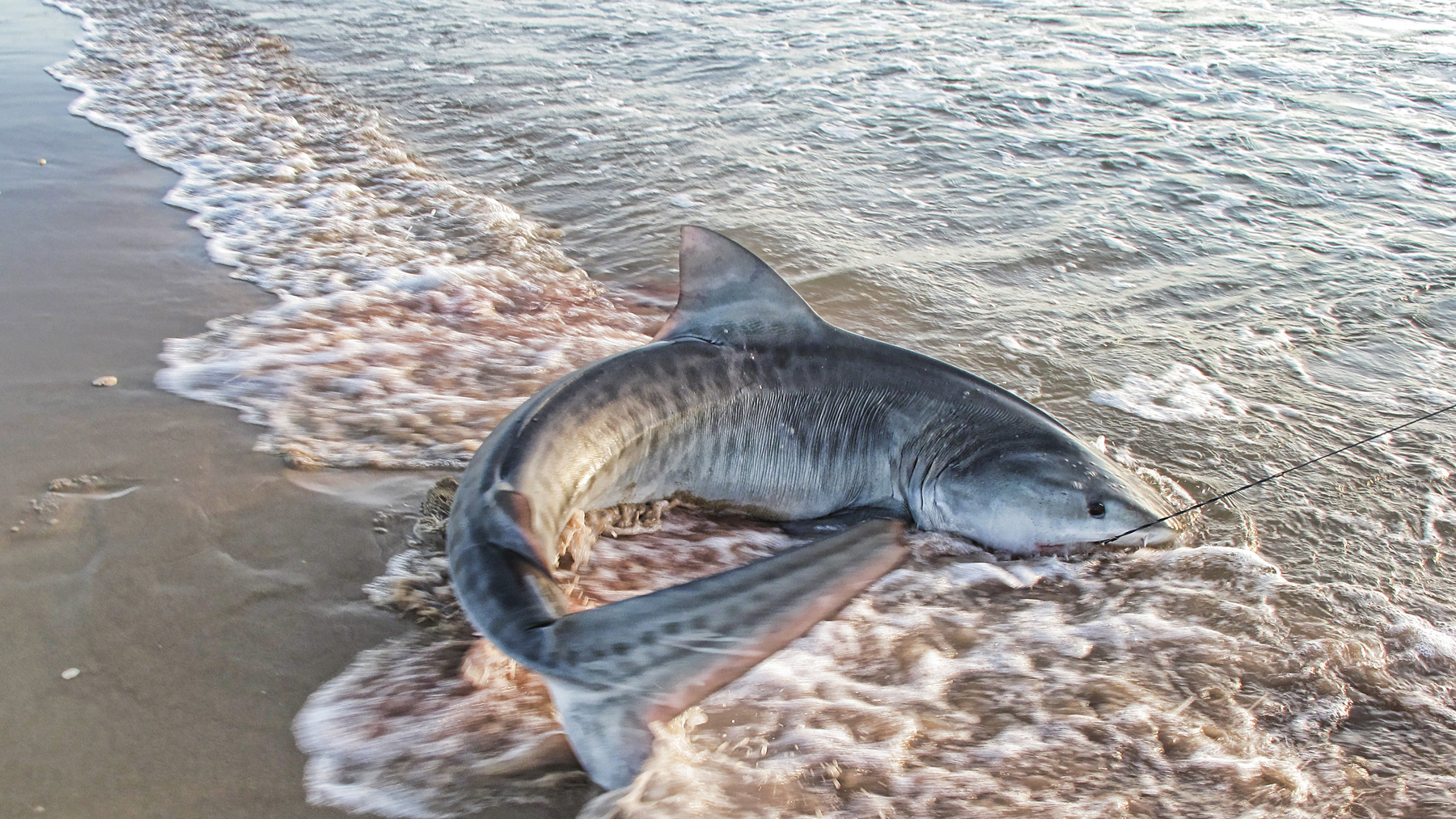 Perhaps the most important decision in shark fishing is bait selection. You may be fortunate and have ideal tides, weather, and location working to your advantage but if you are not using appropriate baits it could all be for nothing. Novice shark anglers struggle with this, not yet understanding why sharks prefer one specific offering over another. That old match-the-hatch theory can be credited for such tunnel vision, narrowing the selection to the most abundant prey species in the area at the time. And, as much as this can be dead-on (at times), it is not ALWAYS true. Determining which bait might be optimal can be tricky, and experience is probably the best teacher for getting it right.

Sharks are some of the greatest predators to ever exist on our planet. For millions of years they have dominated the oceans in constant pursuit of food, their appetites seemingly never satisfied. They thrive on consumption, it is what they were built to do. And yet, even this perfectly evolved eating machine will refuse certain food if their instincts tell them to. Why is that? Could it be a chemical reaction within their brains that tells them to avoid a certain food? Maybe the answer lies within a mysterious sense that something isn't right. What is it that triggers them to feed? We may never understand all of this but there are some things we have observed and learned through years of sharking off our coast.

Here in Texas, shark migration patterns are fairly consistent. Many species are seasonal and arrive as though on cue, in conjunction with prey. In most instances, match-the-hatch rings quite true. Let's start with winter. Our large shark species that time of year is the sandbar shark. You may have stingray or other large baits out but often these sharks feed on what's around. Some of the best sandbar shark bait is ironically our own preferred table fare - pompano, black drum, sheepshead, and even whiting. The reason for this is likely due to the presence of these species in the surf at that time. Come spring, the blacktip sharks ravage the beach in force. They cruise the shallows annihilating whiting and skipjack which are also some of the best baits you can use for this species. Now that is not to say you can't catch blacktips on anything else. Any fresh, bloody bait has the potential to trigger a strike.

In the summer, if you are targeting a specific species, the bait selection could vary accordingly. If you wish to better your odds at a large tiger shark, then go BIG. In all my years, there is no other "money" bait for tigers like a fresh jack crevalle. Whether this bait species is present in the surf or not; use it! You can run out stingray, bonito, or several other large baits only to have the tigers pick up the jackfish nearly every time it is available. No bait is too big for a tiger!

In contrast, a ten foot great hammerhead which is known as one of the fastest and most maneuverable sharks, requires a much different bait. A hammer of that length physically has the same size mouth as a much smaller six foot blacktip, thus requiring a smaller offering. While large hammers are known to hunt down and chomp on giants such as silver-king tarpon, their mouth is quite small for a large rigged bait. While these sharks can and will pick up obtusely massive baits, very rarely do they get hooked. The bait of choice for hammerheads are large chunks or wing strips of stingray.

During fall, the blacktips are once again in full force. During this time they are after skipjack, bluefish, and Spanish mackerel that are also in the surf- zone. You MUST be careful and aware of what baits you can and cannot use in your state. Here in Texas, you may NOT use gamefish (such as mackerel) as bait. However, you are legally allowed to use other non-gamefish that have an establish size/bag limit as long as these fish fall within the requirements. Some of these eligible bait species are black drum, sheepshead, flounder, and red snapper. I have personally caught sharks on all of these fish but once again prefer jackfish for large baits and skipjack for smaller baits. One of the biggest secrets in shark fishing is using hardhead or gafftop catfish as bait. If you cannot get a shark to hit any primo baits, try running a hardhead and you might be surprised. Blacktips devour these fish, and why? My guess is because they are quite numerous in the surf.

Throughout much of the year, bull sharks reign in our waters as our most abundant large predatory shark. They do not get as large as tigers or hammers, but their feeding ability is unmatched. Bulls have a very solid head with a large jaw structure capable of taking down very large prey. The average coastal bull shark we catch is five to six feet in length. With today's fishery in Texas, a big bull is seven and a half to nine feet in length. This fish is capable of being caught on the largest of baits or even the smallest. Bulls rarely pass up a mealperiod. Large jackfish and stingray are your best bet for monsters, while large horse mullet, whiting, and skipjack are great baits for six foot class and smaller bulls. However, you can put nearly anything out and have a chance with these guys. Bulls are notorious for eating even other smaller sharks that have been hooked. Their large teeth are designed for cutting through the toughest of bone and are the only species other than tiger in which you have to worry about cutting through a cable leader.

Surf fishing for sharks is beyond an adventure due to the mysteries that keep us coming back for more. What shark will really succumb to your bait and why? While there is no law or rule stating that the sharks I have mentioned will only take the baits stated, this article should help any young angler who is looking to get on the right path. The beauty of it is that you can experiment and it does nothing but teach you. If the bite is slow, use another bait that is present in area. Experiment with odd baits you wouldn't think would be normally utilized for shark (large blue crab etc.). You may just end up with an oddity such as a nurse shark when using crustaceans. If you are actually trying to target certain shark species, it would be a good bet to use baits known to attract them. Think natural prey but also think about presentation and how it is rigged. Let it be known that freezer-burned bait is a huge turn-off for sharks. The best bait in the world is usually the freshest. Take all of these things in consideration and you will be in good shape. So on your next shark adventure; feel free to experiment, be observant, and have fun in the process!