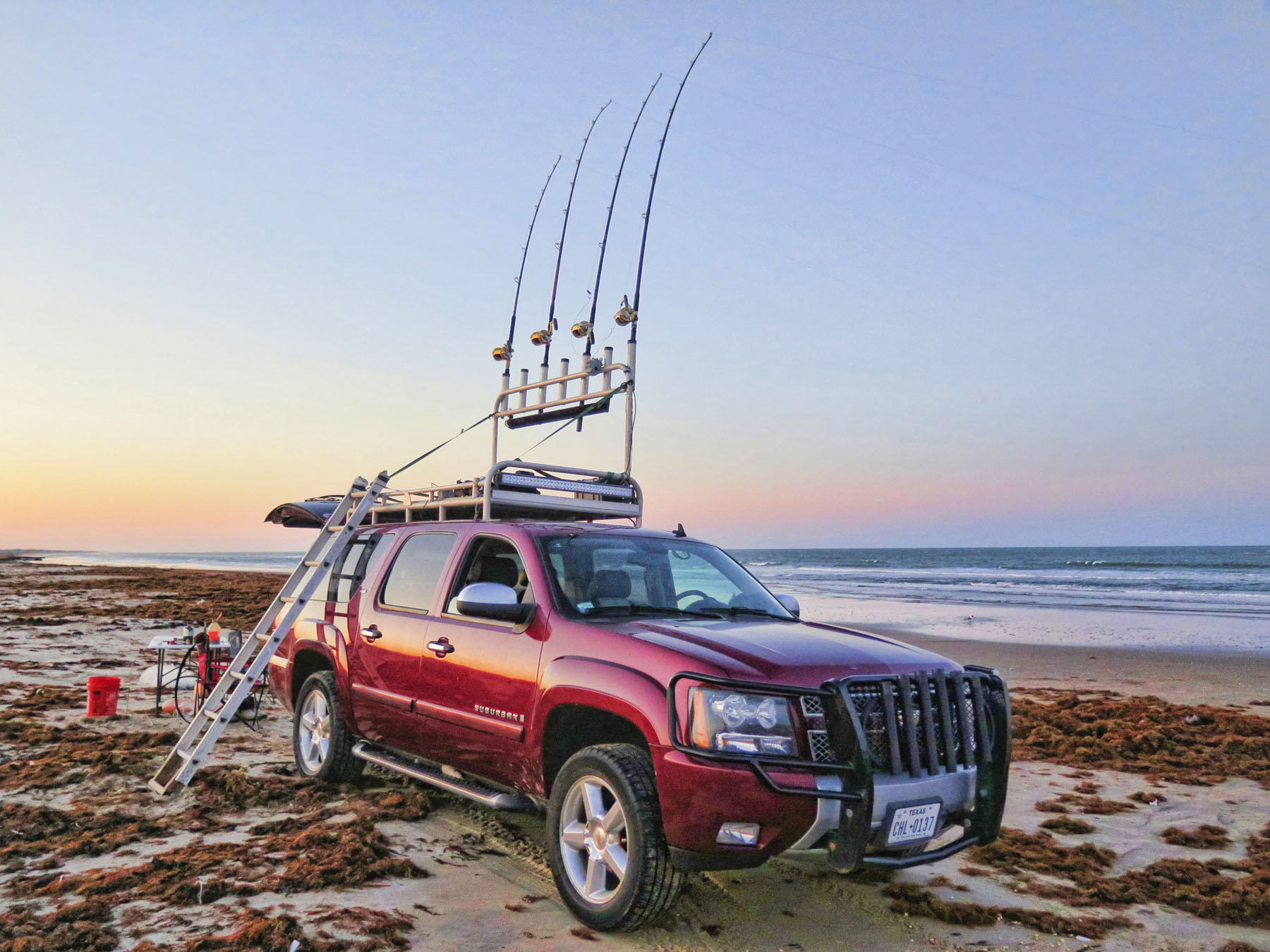 My beach rig had to plow through tons of sargassum this summer.
2014 marked a roller coaster of challenging conditions for surf anglers and also my first full year of guiding on Padre Island National Seashore. Naturally, I began the year with great expectation and I was blessed to present many successful days. Whether good old-fashioned American family outings or when taking anonymous high-profile clients, my trips have the same focus, and that is to present up-close encounters with the best of the gamefish our beloved PINS can offer. The work has been grueling at times but the belief that success is achieved through hard work keeps me eager for each charter.

During the early months of the year we were greeted with Mother Nature's frigid wrath. South Texas coastal water temps hung in the 50s for nearly three months straight–something that has not happened since I've been living on the Coastal Bend. Inshore species normally available remained far offshore until the temps finally recovered.

Come late March, I had the honor of participating and co-hosting an episode of a television fishing program, Breaking Boundaries. Our initial goal was sharks in the surf. With still-cool water temps and the initial influx of a high volume of sargassum, Mother Nature was not kind. Even with great effort shark fishing was impossible. So the show changed directions. On the final day of shooting we got into some "dinosaurish" black drum. The story of our resilient effort in the catastrophic conditions would have been sufficient, but we overcame tremendous odds and the episode, also the season finale, was labeled a success by the film crew and producers.

Getting into spring the sargassum was arriving at a degree perhaps never before seen on our sands. We have always had random bad years but it would thin out after a few weeks. This year's crop blanketed the beaches over and over, seemingly without end, and driving became virtually impossible in places. Eventually though, the water temps warmed and so did the bite. We caught some amazing fish but they came at a price. With the hazardous weed covering the majority of the beach the driving was utterly disastrous and slow. On most trips we traveled 50 miles to find fishable waters4-1/2 hours each way at times. An impossible situation for day charters, luckily I was able to book a lot of overnight trips. Despite the horror of sargassum we landed MANY quality fish.

Summer brought even greater uncertainty. Everyone was anxious to see a beach without weed, but we would have to wait even longer. As with the past few years, we had cold-water upwellings hitting the southern end of our seashore. This cooler water was usually void of bait, but at times fish were still caught. The Big Shell area was a blessing and I conducted quite a few charters there during the summer. As the cool water vanished, bait began to show up in force and shark fishing began to improve. Sharks were being caught pretty consistently and the bite was also on around the Port Aransas jetties as several tigers and hammerheads were landed. The 2014 running of the Texas Shark Rodeo, a long-forgotten tournament rejuvenated with the current format of catch-photo-release via the founders of Sharkathon was well participated.

Come August things looked promising. The Saharan dust fanning off Africa all but blocked many potential hurricanes from forming. Our tropical outlook in the gulf was virtually dead the whole season, which was not a bad thing. There was some concern about a possible red tide, but fortunately we escaped devastation there as well. The calm summer meant fairly clear coastal waters which amplified the noticeable baitballs of anchovies and shad. This meant great news for the 2014 Corpus Christi Blue Water Kayak Classic in which I participated. This growing tournament put over 100 kayak fishermen to the test, battling for kings, cobia, and snapper. In the end, I came out on top, scoring my second consecutive championship amid stiff competition. Shortly after the tournament our hearts sank to see the infamous "rig-killer" pulling up to remove many of our favorite nearshore platforms. Those valuable structures that provided such incredible habitat are now gone forever.

Finally it was fall, but with still-blistering temperatures. Expectations ran high for the annual Sharkathon, until about a week prior. Forecasts were gloomy with our first hard north wind of the season and conditions were a disaster at game time. Anglers intent on fishing down-island had to drive through high water, dangerous and expensive to say the least. Despite horrendous conditions a few sharks were caught; the winning fish taped a meager 6'-2" if that says anything. Nonetheless it earned $20,000. I had looked forward to this event with great anticipation but in the end opted to fish way north rather than risk my bread-and-butter surf truck to the ravages of the sea.

Post-Sharkathon surf conditions were nothing short of awesome, when the weather cooperated, and this sparked exceptional shark fishing. Blacktips were thick and on a solo-trip I was able to release an 8-1/2' hammerhead on one lonely night. Things would continue to heat up as we were on a catching streak, sharks nearly every charter. I had a charter with one of my repeat clients (genuine characters from the UK) in which we landed nine. The season would hit an ultimate high on a trip with some long time shark buddies. Scott Nelson fought a giant through the night and eventually landed a 13'-2" hammerhead; (see cover photo and story in feature section.)

With winter on the verge of barreling-in the mullet migration received the boost it needed. Redfish and jack crevalle finally showed up in force. Sharks were fast and furious and kept my clients busy. Already the winter of 2014 is forecast to be another brutal one along our coast with sub-normal temps. Hopefully we'll get lucky and finish the year in strong fashion.

Despite the obstacles my clients and I had to face, it has been one heck of a year. I will be fishing hard for the entire month of December. Large sandbar sharks should be showing up anytime and I will be trying to put people on this awesome creature. Additionally, at the request of many, I will be offering pompano trips. Looking around the corner, if 2015 is anything like this past year, we will be in for a treat. We will likely have to deal with more sargassum for a few years to come, but with the weed comes a plentiful array of fish.