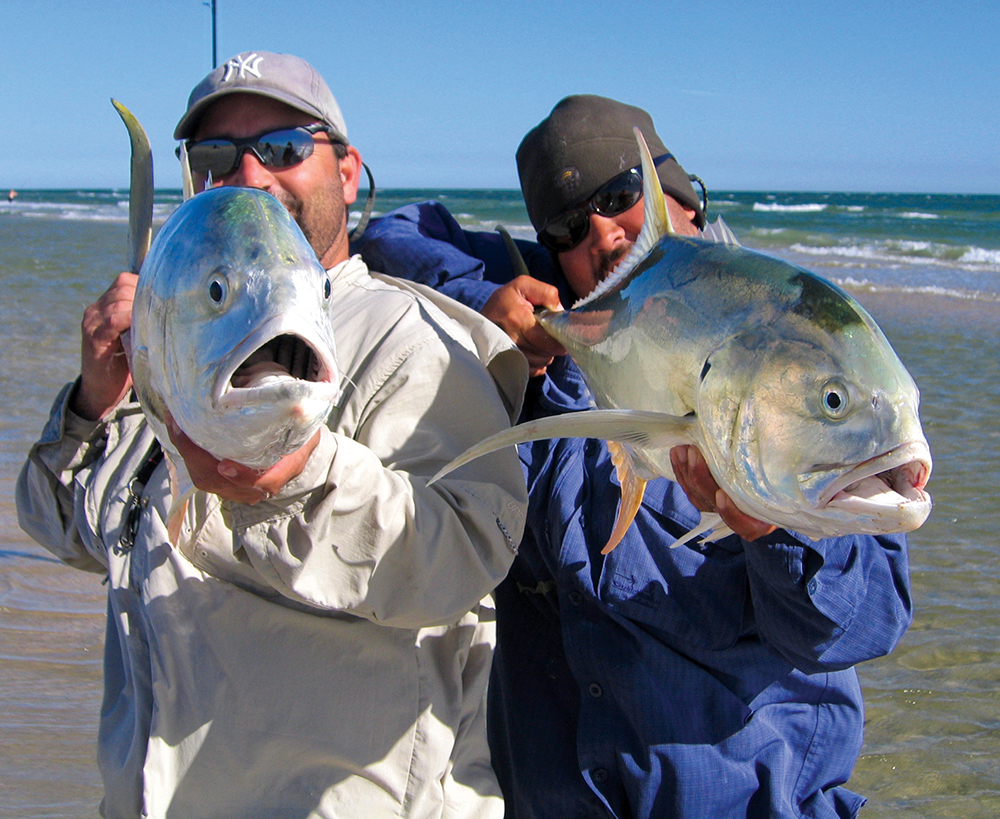 Jack frenzies are frequent occurrences this month – Trevor Lovett and Kip Kaiialia did well casting to them.

Something about a quiet surf softly breaking over a wide, cloudless sky sets a surreal scene.  Cool pre-dawn air draped over the Texas coast radiates peace and serenity.  Soon after a violent cold front whistles over the dunes, a gentle northeast wind often whispers gently.

While I drive south on the Padre Island sand, I contemplate the day's possibilities.  What fish may be lurking in the waves after another proven productive cold front has passed?  I drive five miles, then five more, then find myself 15 miles down the National Seashore, seeing virtually no signs of action.  I begin to worry.  I know I shouldn't, but I do.  Is my timing off?  Are the fish simply not here, or are they not feeding?

As my journey down the strand stretches to 20 miles, I begin to see action in the distance.  When I get closer, I recognize a ballistic feeding frenzy.  Jack crevalle, red drum and sharks destroy bait, pushing their prey right to the edge of the beach.  Suddenly, the sense of serenity transforms into one of the most chaotic acts of nature--the surf zone is now in a state of pandemonium!

Such are the sights and sounds of November along the beaches of South Texas.  Sometimes, fall and winter action can be as desolate as the moon.  Other times, usually a couple days after a strong cold front passes, action worthy of all the hype unfolds.  Overall, November may be the most active month in the surf for an array of species, small and large.

Impressive numbers of feeding sharks blitz the beach, blacktips and bulls at their highest levels of concentration for the year.  In fact, eight to ten different species of sharks often prowl just beyond the breakers during November.  Certainly, many other present species provide potential for thrilling experiences.

This is the peak time for surf jacks.  The Jack Crevalle (Caranx hippos) is undoubtedly, pound-for-pound, near the top of the list of hardest fighting fish in the Gulf.  Their bulldogging abilities compare well to those of offshore tuna.  During the fall, fully mature jacks averaging 25 pounds or more storm the shallows in search of mullet and menhaden.  What a spectacular treat, to see a pack of jacks cruising through the breaking waves.

Sight-casting to these mini torpedoes in strict hunting mode sets the stage for quite a fight, one which will surely leave the arms aching.  These bruisers are a surf fly-fisherman's dream.  Most any angler can appreciate the raw power of this stout species.  While not normally harvested to eat, they provide one of the best big-shark baits around.

Jacks and sharks are not the only hungry predators demolishing bait in the shallows during the Thanksgiving month.  Red drum make their presence known in great numbers.   Along the entire Texas coast, adult red drum take advantage of the migrations of the mullet and other baitfish and show up hunting in the surf.  Anglers commonly cast live mullet for jackfish only to get invaded by schools of bull reds measuring more than 40 inches, so it's a great time to check a trophy bull red off the bucket list.

Redfish are both hunters and scavengers.  At times, these eating machines will pick up almost any bait, including small shark baits.  While these monsters don't make good table fare and can only be harvested with a tag, they provide the quintessential opportunity for big fish photos.  At least 95% of my clients end up releasing their giant reds after obtaining a memorable photo.  The new era of conservation has helped reestablish stable numbers for this species.

Even with so many sharks, jacks and reds around, anglers can find a great deal of action with other fish.   Both Spanish mackerel and bluefish are as plentiful as at any other time of the year.  They venture very close to the beach as they chase down trains of mullet moving through the breakers.  Both these medium-sized species have razor sharp teeth.  Texas blues run a bit smaller than those in the North Atlantic, but can still exceed two feet in length.  The Spanish mackerel, close cousins to the king mackerel, have a deserved reputation for tasting more like their other cousins, the wahoo.  Both species will hit lures or live mullet and put up a fun fight on light tackle.

By end of the month, if the water cools down enough and has good visibility, another highly desired fish will make its way into the surf.  Florida Pompano show up in good numbers in Texas during the cooler months.  While they can be caught on any random winter day (pending decent surf conditions), late-November and early-December offer the best shot at the largest specimens.

One of the tastiest fish in the Gulf, pompano are highly coveted by surf fishermen.  They're somewhat small, but they make up what they lack in size with their abundance.  On banner days, it's possible to catch triple-digit quantities.  They feed mostly on small crustaceans such as ghost shrimp and coquina clams, so carrying a pound of shrimp in the cooler offers a chance at a harvest of these delightful fish.

Other anomalies may reveal themselves too.  The passes and cuts from Port Aransas southward will hold numbers of tarpon following the migrating bait schools.  Down near South Padre, Thanksgiving has proven to be one of the most productive times for Texas tarpon.  Channels and passes such as the Port Mansfield  jetties are temporary holding grounds, but the silver kings sometimes linger for weeks, if food sources remain plentiful.

An even more rare species sometimes shows up this month—the mako shark.  If the water cools off enough, and other variables align perfectly, Texas anglers will have a slight chance to fight a shortfin mako shark.  Of the six makos ever landed from a Texas beach, I reeled in three and was present on the beach for the other three.  The mako is the Holy Grail for land-based sharkers here in Texas.

Undeniably, a cornucopia of fish provides anglers plentiful options in November’s surf. There’s something to please everyone, from fly-fishing fanatics to hardcore shark enthusiasts, from crusty, aged veterans to young adults and children, too. Consequently, I book lots of family charters this month. The action can be fast and easy, but the catching does depend heavily on compliant weather conditions. The wildly changing Texas autumn weather shows its true colors when balmy temperatures in the 80s plummet 40 degrees after a front. So be wary, but also aware. A couple days later, the potential for an epic adventure awaits.