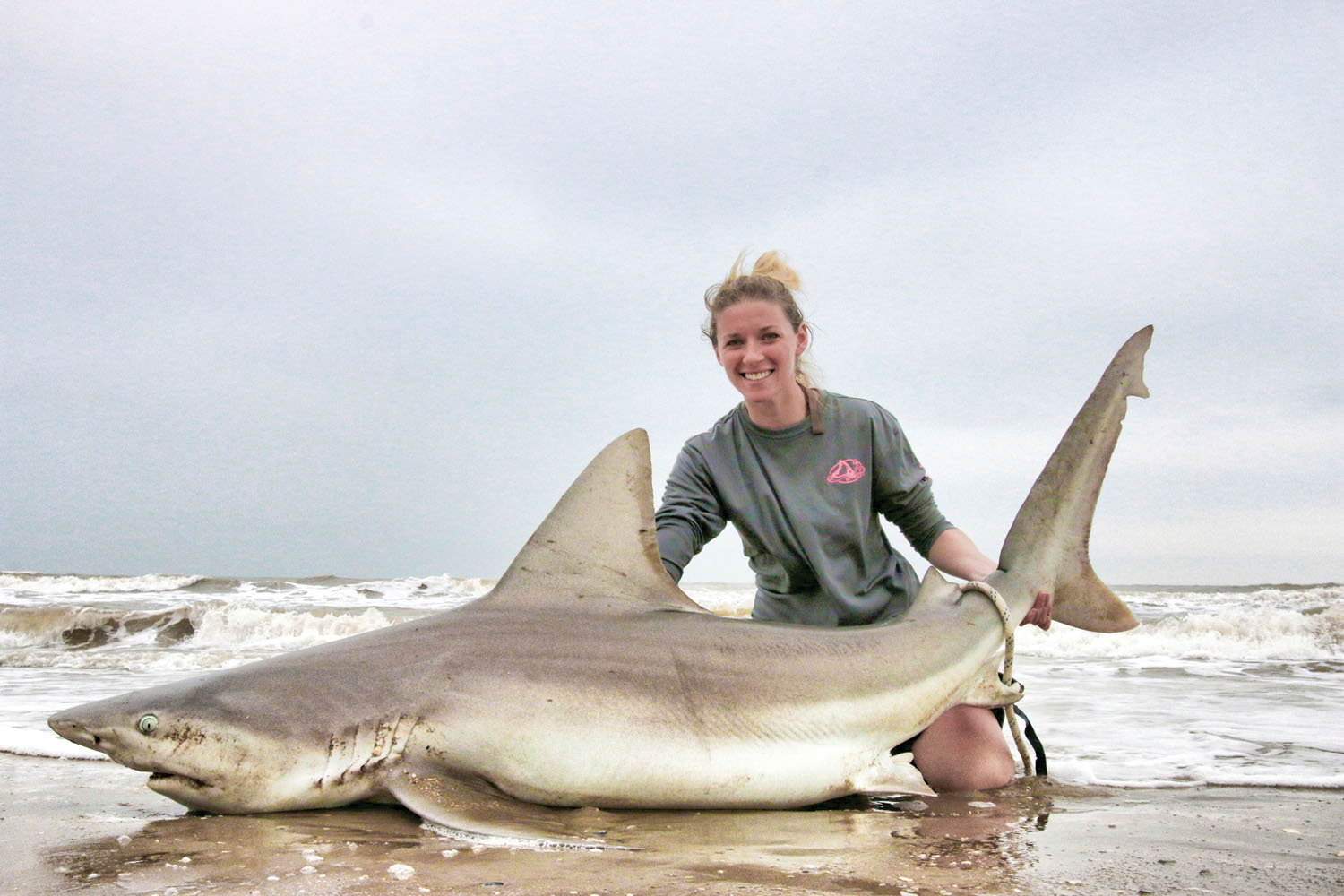 Alexis and her first sandbar landed on a recent PINS trip.

The warm winter of 2016-2017 has proven to be right about on par with the previous two. As of January, 1 we've had only a few fronts that might qualify as "cold" but that could change any day. Some areas of the coast have endured very thick fog that would appear and hang around for days. When the sun broke through and the water had a chance to warm up, fishing would turn on in the surf zone with red drum, black drum, and pompano. Though the beaches have remained relatively quiet in regards to human presence, the same cannot be said for marine species. I am a shark fisherman by nature and strive to target them every chance, year 'round. I know when to expect certain species to become plentiful in the surf and I know when to expect fish to head to deeper, warmer water. I also know that this February we are about to see an abundance of sandbar sharks.

The sandbar shark moves inshore as the Gulf of Mexico cools down in winter. While generally a highly migratory species, a component of the sandbar population remains in deeper gulf waters all year. Sandbars are very robust with very impressive teeth. Visually similar to the blacktip shark, but larger in terms of overall bulk. These fish typically max out between 7.5 and 8 feet in length.

Sandbars have two physical characteristics that aid in identification. First is an interdorsal ridge running between its dorsal fins. Of the shark species found in Texas only a few possess this feature. Blacktip and bull sharks do not, and can therefore easily be ruled out. The other obvious giveaway is the massive triangular dorsal fin. When compared to say the blacktip, the sandbar dorsal is far larger in relative scale to the rest of the body. That uncommonly large dorsal is often the first clue when an angler is battling a sandbar to the beach.

As with most shark species that frequent our surf, sandbars have a water temperature range in which they are most likely to be present. Ideal would be between 64 and 68 but might appear in slight deviations outside that range. When the water temp drops into the 50s they move back offshore.

Two reasons for sandbar abundance in our surf during winter. Mating: It is not uncommon to catch a mature "swollen" male, and then a mature female within minutes. For whatever reason, sandbars come from all around the gulf to mate in the South Texas surf during February and early-March.

In addition to their reproductive habits, sandbars are also attracted to the readily available food sources. Their preferred forage species include whiting, black drum, pompano, and sheepshead. Deploying any of these fresh baits during good water conditions is likely to entice a large sandbar. While most often caught on kayaked baits, they are sometimes taken on baits casted out from the beach. Even more so, I have seen big sandbars caught in channels and passes at night.

Interesting is the sandbar's relevance to the fishery. Within the last few years sandbars have become a federally protected species. During winter in South Texas they might seem a dime a dozen. However, overfishing along the East Coast has resulted in the protected-species status. Sandbar sharks were commercially harvested and labeled as blacktip shark in the market for many years. Truth is they taste similar and can be quite delicious. Seafood marketers believed labeling truthfully as sandbar shark would sound "dirty" and diminish the appeal, hence they were simply sold as blacktip. All of this is now irrelevant with the protected status being enacted. At the end of the day the protection of the species is good for the fishery and even better for the species itself.

I have had many run-ins with sandbars and I enjoy catching them. Up until about 15 years ago, no one really knew about our wintertime surf shark fishery. The old-timers fished from Memorial Day until Labor Day. When the weather got cool everybody went hunting. Biologists knew sharks were present in the surf in winter, but it took quite a while for winter shark fishing to really catch on. The advent of the internet and the sit-on-top kayak for safely transporting baits offshore no doubt helped the evolution to occur.

Sandbar sharks can be quite remarkable from an angling viewpoint. Like their smaller cousins, blacktips and spinners, sandies have been known to make marvelous surface breaches. I have witnessed this countless times and it is still impressive to me. While each shark species has its own behavioral traits, sandbars are typically solid fighters and use their bulk to advantage.

A great example of this was when Alexis Anthony and I were fishing for sandbars recently. Late that afternoon she hooked a solid fish that put on a fantastic display and impressive fight for being only a 6'-9" specimen. I have rarely seen other sharks of that size fight as hard. We were releasing that fish when a 6'-6" took a bait and put up another impressive fight. We ended up "two for three" in a matter of a couple hours. We would have undoubtedly landed more had we run baits back out for the evening bite.

While I have landed sandbars in the 7.5-foot range, every fish is unique in its own way. These are very hardy sharks. I've heard tales of anglers years ago keeping sandbars for meat or jaws, and thirty minutes on the sand they suddenly went berserk. This could be attributed to the cool water and weather allowing the fish to retain as much oxygen as possible.

In March 2006, I had a very scary encounter that resulted in a trip to the ER and surgical reattachment of some tendons in my hand. Sandbars are very aggressive on the sand and capable of doing damage. Never underestimate any shark, and definitely do not underestimate a sandbar.

Sandbars deserve our respect and our protection. While our fishery is healthy and sustainable at present, it is important for Texas anglers to obey regulations to assist the recovery of the species in other parts of the Gulf of Mexico and Atlantic. If you want to brave the cooler conditions, get out and deploy some baits. You may be delightfully surprised.