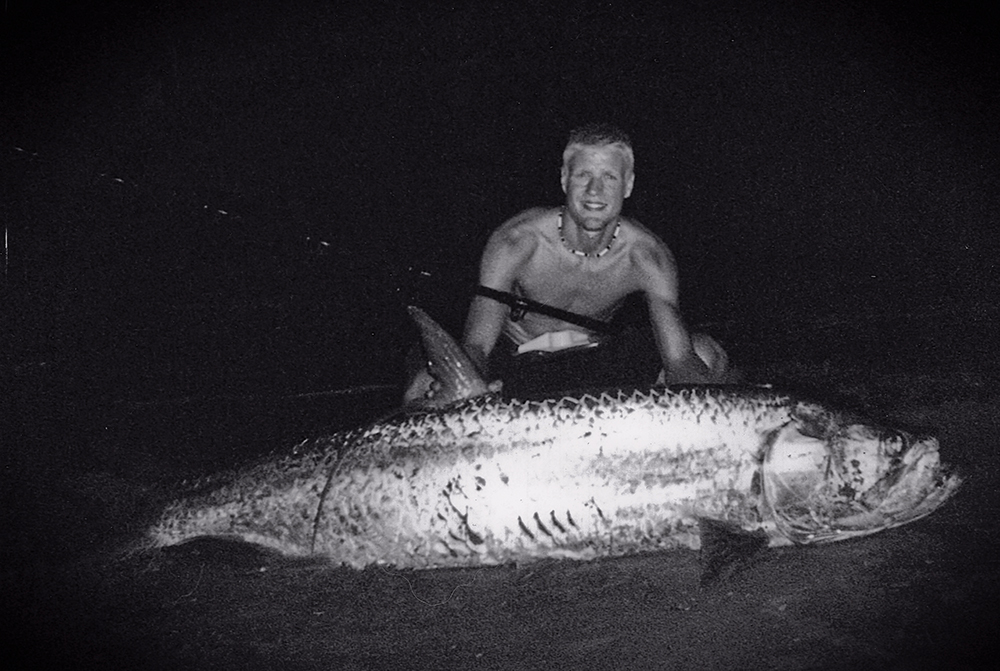 Youthful Oz showing off his “grand tarpon.” The fish he says helped him build a relationship surf-fishing icon Billy Sandifer.

I've been blessed, fortunate to follow my lifetime passion down many different roads.  I get to enjoy the daily adventures of an outdoor life, spending ample time near and sometimes in the water.  From beloved vantage points, I encounter nature's wildlife in its most pristine forms.

Though I've been pursuing this wildlife for decades, I really haven't lost a step.  These days, I feel healthy as an ox, full of abundant energy to tackle a long day's outing with ambition and desire.  The past year especially I'm healthier and more fit than ever, because I began consuming a smart, clean diet. A looming benchmark urged me to pay closer attention to the foods I eat; as I typed this, I celebrated my 40th birthday!  Most of the time now, I feel like Superman.

I certainly don't feel 40.  I have no idea where the time goes, but when I reminisce about my years of adventure, reality sets in.  I've experienced a lion's share of grand memories.  When I first came onto the coastal fishing scene at around the age of 20, I gravitated towards older people, hoping to absorb some of their knowledge and skills.  Today, some of those people say they can't believe the kid they helped get his start fishing on the beach has now doubled in age.

I wish my beach vehicles had fared as well as my body and mind.  I've burned through a few, but I remain ready and able to walk eight hours a night gigging, or to kayak several grueling miles a day in the surf.  An energetic eighteen-month-old daughter enhances my youthful feelings; she also inspires much love and pride.  From both the physical and mental standpoints, I still ride the coastal crazy train, racing headlong toward the next big adventure.

Recently, I took an opportunity to reflect on a catch I made in my early years which affected me profoundly. It feels like this single event, more than any other, led me down the road to where I am today.  The story of the catch starts with me in the beginning phase of my  beach-life.  The year was 2002, during my Ramen noodle-fueled college days.  Just a couple years into my surf-fishing experience, I'd recently graduated from dedicated pier-rat status and evolved into a mobile surf angler, after absorbing some online inspiration from David Williams.  The dawn of social forums spawned my interest in fishing the surf for sharks.

My childhood friend Nick Tullos and I had planned a weekend surf-fishing trip down Padre Island National Seashore.  I called in sick at my job around midnight, leaving a message on voicemail right before I lost phone service while driving through the park entrance.  We hit the beach armed with the traditional setup used in the 90s and early-2000s.  Some of today's younger generation don't realize we didn’t fish with an arsenal of fancy, expensive lever-drag reels back then; we  mostly used primitive big game reels like Penn Senators for shark fishing.  We placed our rods and their now archaic reels at ground level, in PVC holders—those were the days before high-altitude truck platforms began to dominate the beaches.

I had no way of knowing the events that developed on the night of July 10th, 2002 would shape the course of the rest of my life.  We arrived at our hopeful honey hole just before dark, and I kayaked a couple medium-sized shark baits out beyond the breakers.  When darkness fell, the environment turned openly hostile.  On this blazing hot, muggy night, mosquitoes attacked with painful precision.  The situation became miserable in mere minutes.  When just about all hope was lost, I hooked  a strong fish on my 6/0 reel, which kept making short, fast bursts.  Initially, I thought I'd hooked my first big scalloped hammerhead.  Under a completely black sky, with no moonlight to illuminate our actions, Nick turned his vehicle to shine his headlights on the water.  By then, I had begun winning the battle with the fish, though it still fought with stubborn strength.

After a fight of respectable length, I pulled the fish near the shore, then handed the rod to my fiend and moved down the line to the leader.  My inner voice kept saying, “It's game time,” and I was ready to drag my first big toothy critter onto the beach.  As I walked onto the first sandbar and approached it, I saw two giant eyes reflecting back at me.  I did a double take, but soon realized, to my great surprise, I was staring straight at a tarpon!

The silver king inspired pure awe in me.  Almost seven feet from nose to tail, the beast weighed roughly 200 pounds, a true giant.  After a few seconds, I snapped out of my mesmerized state, realizing we needed to release the fish alive.  Maneuvering her wasn't easy, but we managed to quickly snap a few photos and send her back into the inky abyss.  The elation I felt upon releasing such a welcome, unexpected prize overwhelmed me.  To this day, I crave the opportunity to relive such moments.

Ultimately, the catch of that tarpon became important to me for various reasons.  At the time, it was my largest fish caught from the beach, easily topping all the mid-size sharks this kid had caught over his first couple years fishing the surf.  Perhaps more importantly, the catch gained the attention of quite a few people, most notably the late Billy Sandifer.  I remember him mentioning the events of my catch in one of the articles he published a short time later.

Though I was really just getting into Texas saltwater fishing, I already knew of Billy Sandifer.  I vividly remember seeing his photos and the iconic tiger shark postcard he displayed.  I remember the article written about him in the Austin American Statesman; it covered two full pages.  While I had encountered him briefly on more than one occasion, he didn't know me from any other Joe on the beach. So his acknowledgment of me in his article spurred a great sense of pride.  The whole scenario  made me want to go out there and land another monster fish; it also made me long for another personal moment with the next worthy beast.

After that catch and after the appearance of my name in his article, Billy came to know me.  I knew he could pick me out of a crowd; I was no longer just another guy.  He'd stop and talk to me if he saw me on the beach.  During those conversations, we built a mutual, respectful bond, and the guru of the seashore became my friend and mentor.  Anyone who knew Billy will agree you had to prove yourself to him before he would let you into his circle of friends.  Once I earned his respect, I remained in for years, until his days came to their end.

That fateful tarpon became responsible for many things, including fueling an obsession which lingers and gets stronger, even after eighteen years.  The moment served as a launch pad for what happened just one year later, when I caught my first mako from land.  Like the tarpon, the mako earned me recognition from strangers, but on an exponentially larger scale, propelling me rapidly toward my current lifestyle and profession.  I feel like I've crammed enough living for several people into these 40 years, like I've bathed in a saltwater fountain of youth.  Cheers to the next 40!  I look forward with eager anticipation to meeting more of the ocean's great beasts and living big adventures.