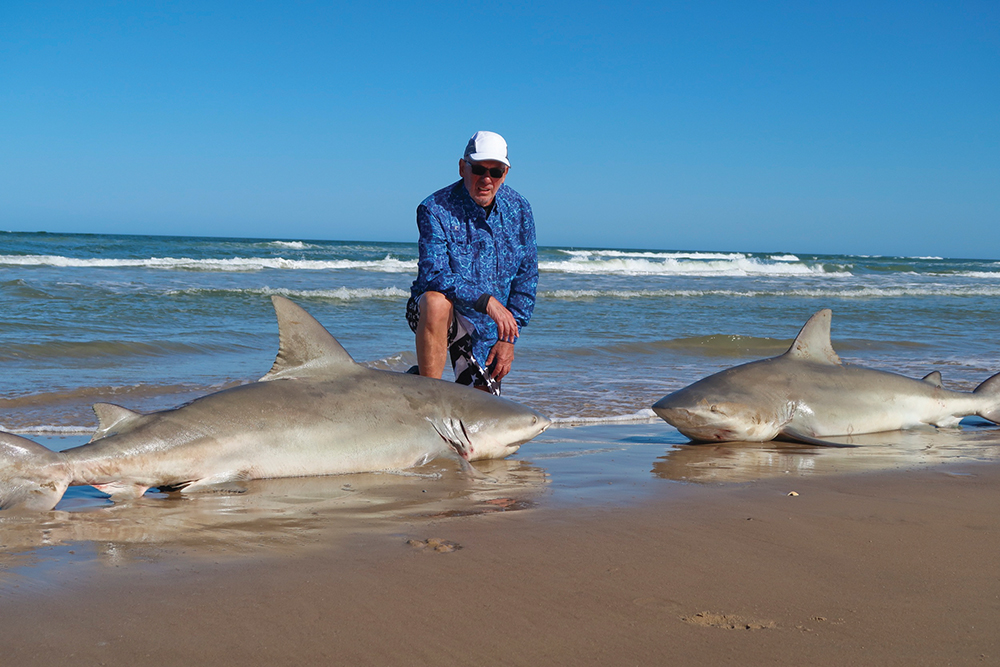 We are closing in on the end of another memorable year of fishing. Over the past twelve months the Coastal Bend region has endured weather and water conditions that were both phenomenally good and extremely brutal, the same cycle we deal with every year.

On the drastic end of the spectrum, harsh weather conditions relocate normal concentrations of gamefish, one of Mother Nature’s ways of protecting and replenishing the fisheries. We are lucky to live in a place where we have so many different species to target throughout the year. Notable has been a resurgence of jack crevalle and speckled trout in the surf zone, both species showing in better numbers and sticking around longer than we’ve seen in quite a few years. We were also blessed with an exceptional season of big shark activity. This article will review the highs and lows of surf fishing along the Padre Island National Seashore in 2019.

While we did not have the coldest of winters, cooler than normal temperatures lingered into early spring producing a somewhat delayed and sluggish kickoff in the surf. Redfish and black drum roamed the shallows in fair numbers but the general absence of bait concentrations made them difficult to target at times. The surf zone then fell nearly dormant in the aftermath of a strong cold front in early March that delivered some of the coldest temperatures of the winter season.

In the bays, redfish and trout activity spiked right on cue as it typically does following a harsh cold spell. With surf action registering near nil, I spent some time sightcasting reds along ICW drop-offs in the Upper Laguna Madre. Winter is one of the few times I actively pursue bay and backwater fishing, simply because there’s little or nothing to pique my interest in the surf.

The surf didn’t lie quiet for long, though. While slightly delayed, fishing opportunity struck with a vengeance later in March. This year was perhaps the best April we have experienced in the surf in a decade or more. Jack crevalle stormed the beach in impressive numbers, better than we have witnessed during spring in quite some time. On a morning scout prior to a charter, with clients scheduled to meet me on the beach after midday, I managed fourteen mature jacks on lures within a three-hour stretch. Other anglers on the beach that morning enjoyed similar success. Appropriately enough, the charter that followed focused on the abundance of jackfish.

In terms of shark bait, jackfish are the equivalent of manna from heaven. The flesh is oily, bloody, and tough. Their large size is another godsend. Hardcore sharkers rarely pass the chance to fill the freezer with quality baits when the jacks are running. The kicker to the whole deal is the angling sport while collecting them. Pound for pound, jacks are some of the most powerful fish you will ever encounter in the surf zone on rod and reel.

Bull sharks began to show almost as soon as the jacks arrived. Another highlight during spring was having one of my regular clients, who happens to be a seventy-year-old sportsman, accomplish a double hookup and landing of a pair of seven-foot sharks. To date, I have witnessed only three instances of double shark landings – on a single rod and bait.

Around this same time we also got the first Texas lemon shark of the year. A recapture, actually. One of my clients had previously landed and tagged the nine-foot-three-inch specimen. Even crazier, I had originally tagged and released the same fish myself a year earlier, only a few miles away. What better proof that sharks utilize similar patterns year after year during the availability of a relevant food source?

Right on schedule in May, speckled trout began to trickle into the surf. Come June, we were enjoying the best trout action we have experienced in years. The trout remained in the surf all summer, with several absolute beasts sighted in the shallows. I typically do not target trout very heavily, but when they’re smashing topwaters mornings and evenings it’s hard to pass up. Other species, not exactly regulars in the surf, made significant showings. These included king mackerel and little tunny (bonito). A friend and fellow angler landed a solid cobia (ling) while tossing a spoon into a frenzy of bait.

All this action would soon translate to big sharks. Alexis managed to bring what could be the largest bull shark, in terms of mass, I've ever witnessed on the beach. The tape formula pointed close to 500 pounds for the 8-foot 10-inch specimen. Heavier even than my personal best 9-foot 2-inch beast I landed a few days later.

Shark fishing remained on fire through June and July. In the wee hours of a notable overnight charter we had a double hookup with a large great hammerhead and tiger shark. Both anglers landed their respective fish and we accomplished successful releases. A very memorable experience for a fishing guide that does what I do.

Success continued with a variety of shark species through mid-July, which happens to be the beginning of our gulf shrimping season. During shrimp season the majority of our small to medium shark species leave the surf to gorge on the smorgasbord of net cull discarded by the shrimp boats. The hottest part of summer also contributes to a general slowing of shark action in the surf. Luckily, we still had phenomenal trout action to help take up some of the slack.

August has a reputation for attracting large sharks to the surf and it did not disappoint this year as tigers and hammers began to appear. Unlike the smaller species that shadow the shrimp boats for handouts, the tigers and hammers come to the surf zone to feed on the abundant southern and roughtail stingrays. On a trip with Alexis and my daughter, Alexis tangled with what could well be the biggest hammer I've ever seen hooked in the surf.

The big hammer picked up a whole ray and proceeded to nearly dump an 80W reel filled with braid. Alexis finally got it turned with about 50 yards left on the spool. Yielding to the pressure, the shark swam to within 400 yards of the beach and then turned and abruptly headed back offshore. Alexis would ultimately and painfully end up losing this fish. But that was just the beginning.

Come nightfall, Alexis hooked into a tiger and fought it nearly an hour before it too managed to get loose. A few hours later she won her revenge though, landing a ten-and-a-half-foot tiger. The largest shark thus far in her career.

In a four week period at the end of summer, my clients and I put five tigers on the beach. Around 10pm on August 31st, another regular client, young Reid Nicolau, battled a 12-foot 6-inch great hammer to the sand. This is the largest shark on any of my charters, exceeding the previous record of a near 12-foot tiger, landed by none other than Reid himself, four years earlier.

Big sharks continued to roam the surf zone in September as our summer weather pattern continued well into the fall. Even in mid-October, the surf temperature remained in the 80s, much warmer than average. During the annual Sharkathon tournament (one of the largest surf fishing tournaments in the world), I had a tiger shark take a generous bite out of a whole ray I had deployed. Unfortunately it did not get the hook. Ironically, there has never been a tiger shark landed in this tournament, as it is often held in October when the blacktip and bull sharks have returned to the surf to feed on mullet and other finfish, greatly outnumbering the other species present.

Air and water temps continued warmer than normal until near Halloween when a strong cold front arrived. As expected, mullet trains began to form along the beaches and the surf became dominated again by hordes of jacks and redfish. Sharks, too, joined the frenzied feeding, as they traditionally do during November.

Oversized reds, bulky jacks, and feisty sharks are usually the name of the game until just after Thanksgiving.  And while I cannot yet report on our December activity, I can say I expect good things until the water gets too cool, later in the month. With patterns running about a month behind, we will likely see jackfish action into December along with an epic pompano season.

Overall, 2019 had been a great year in which anglers were able to participate in a great variety of fishing opportunity. Bring on 2020!