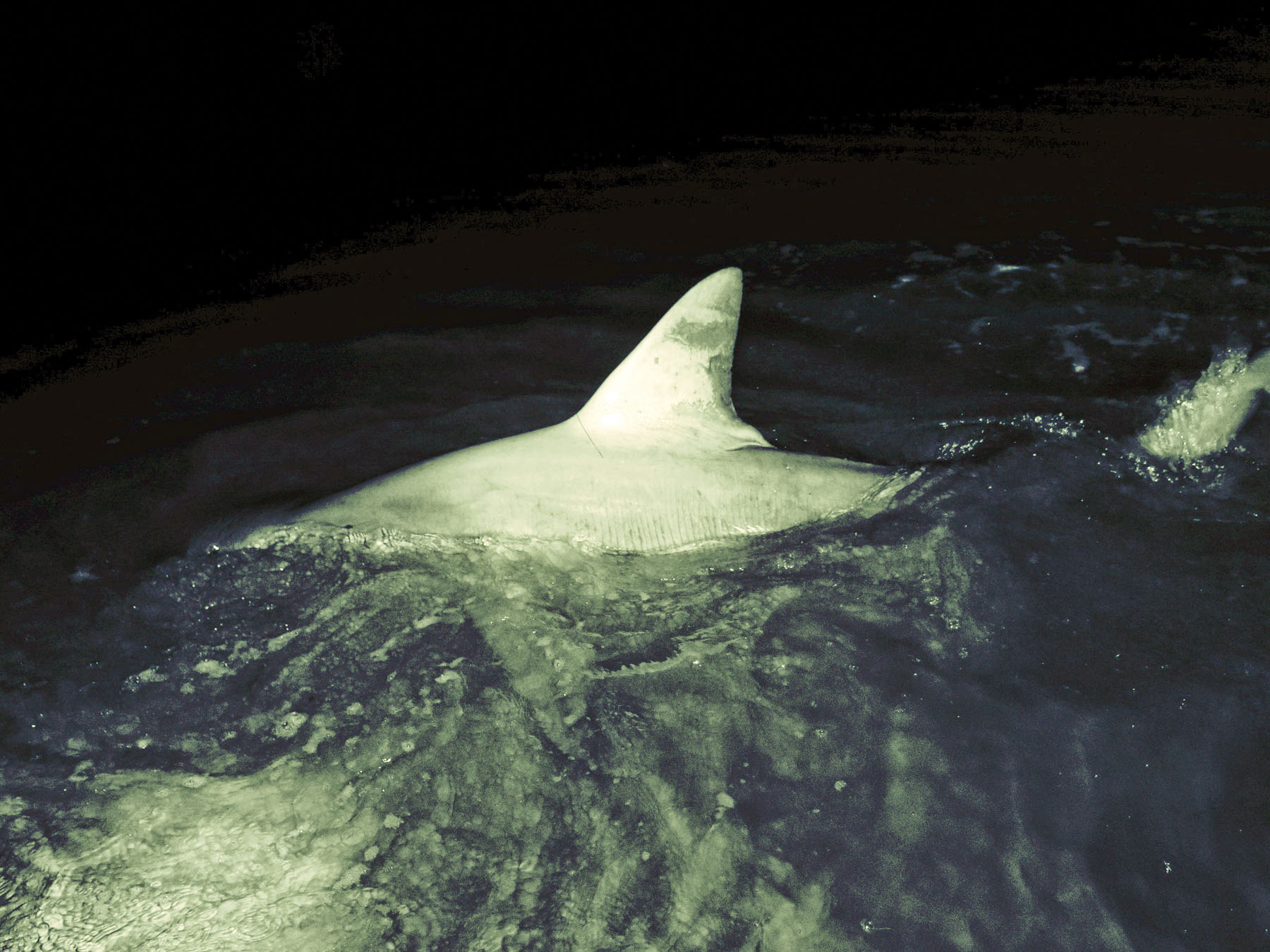 Land-based shark fishing is an addictive pursuit that rarely loosens its grip on those afflicted. While a far greater number of anglers focus on trout and redfish in the bays, another sizeable group prefers nearshore Gulf fishing for red snapper, kingfish, cobia, dorado and other species. At the apex of the sportfishing society are well-heeled sports seeking prestigious pelagics such as giant billfish and thunderous tuna. And then there are the land-based shark fishermen; crusty hardcores who take to the Texas coastline in hopes of tangling with one of Mother Ocean's supreme predators.

A common misconception leads many to believe that sharks leave Texas coastal waters during winter. While the coldest weather can push sharks and other gamefish temporarily offshore, there are times when blue-bird winter days produce some of the most amazing fishing you will ever experience. Sharks are eating machines. They stake out in certain regions and depths simply because of an available food source. If their sources of prey move into deeper, warmer waters–so will they–and this leaves a land-based fisherman stranded. Here in Texas we are blessed to have sandbar sharks, a species that thrives in the winter surf zone.

Confusion arises when inexperienced anglers claim they caught a "sand shark." What they are actually referring to was more likely a blacktip or a sharpnose, both species very common surf inhabitants during warmer seasons. In contrast, the sandbar shark (Carcharhins plumbeus) is a requiem shark that typically lives further offshore but makes its way in shallow to feed and mate during cooler months.

There is no mistaking the sandbar if you know what they look like. They have a large robust body similar to the bull shark, but with a very large triangular dorsal fin. They have a large mouth containing an impressive set of teeth to match. And of all the shark species I have put on the sand, this is by far the most aggressive. Whether a juvenile chomper or a 200 pound adult, they ALL have an aggressive attitude. It is said that a shark's body is so flexible that they can bend and bite their own tail, if need be. I have seen firsthand the great flexibility of the sandbar species.

No brag, but I would be willing to bet that over the past 15 years I have been fortunate to land more sandbar sharks from the surf than just about anyone west of the Mississippi. In one season alone I landed 18, mostly mature specimens. Sandbars were never seriously targeted until about a decade ago; due mainly to the fact that your old-time sharkers fished primarily from late spring until around Halloween. The modern-era conservation-minded sharkers, we are a different breed, and we fish year-round. The wintertime sandbar fishery is a hot fix from cold water.

Many sandbars have been tagged in the name of science and the recapture rate is the highest of any species we encounter. I have had a fair share of recaptures myself, and usually within the same area as originally tagged. There is still a great deal that we do not know about these sharks. As of recent, they have become federally protected for their large fins were a global target for illegal finning.

Being a charter guide specializing in sharks, it has been a long, yet successful year. I have been lucky to put a goodly number of clients on great sharks. During winter, charter demand subsides until spring warm-up but I continue to fish. I made a personal trip between this past Christmas and New Year to hopefully add to my Texas Shark Rodeo year-long tally. Competing against more than 500 registered anglers, and with but a few days left, I just had to do it.

I was excited as I rolled down the Padre Island National Seashore for this relaxing soul mission. Water temperatures were spot on for sandbar presence. The only downfall would be a cold front due that evening that might hinder bait deployment. Knowing the surf would be higher than normal, my plan was to camp near the Port Mansfield jetties until the surf laid two days later. Before the front hit, I made camp and got baits out. Around 8:00PM I was slammed with rain and bitter wind. As fate would have it, I got hooked up during the chaos, and brought a respectable 7'5" sandbar to the beach that a buddy had tagged back in April. Cool deal.

From that point on it was cold, obnoxious rain for eighteen hours straight. Daytime was spent keeping warm in the truck with minimal fishing. Right before dark I duked it out with the surf and got a few more baits out. Things remained quiet until 2:00AM when another quality sandbar picked up a bait and I landed a 7'2" sandbar–another tagged fish. Ironically, this was one I tagged for a client exactly a month prior, just a few miles away. The rest of the night was quiet as the rain subsided to scattered drizzle.

The wind died down at sunrise and the surf calmed. It was time to relocate back up the beach to find some good structure and green water if any was available. I made camp once again and right around noon I had baits rigged and ready for deployment. I got the baits out several hundred yards into green water and was very excited.

My first hook-up came two hours later, a respectable battle put a 7-foot male on the beach, extremely large for the gender. Once again this reinforces my theory that these fish are in shallow, mating this time of year. The abundance of forage in the surf makes it an ideal breeding grounds. I tagged and released that fish and shortly landed another male, this one just over 4 feet. This particular fish while not mature was there specifically for the plentiful food; whiting, pompano, and stingray.

As darkness was falling I hooked-up again, this time a large female of 7-feet, tagged and released. Then came a 5-footer, followed by one just over 6-feet. Shortly after midnight I landed a 6-foot blacktip, the only non-sandbar of the trip.

A re-enforcing cold front blew through the next morning and it was time for me to go. For a solo trip with dull weather, I ended up going 7 for 9 on sandbar sharksthe most I've ever landed on a single trip. Their combined lengths cushioned the 1st place lead for my Shark Rodeo team and boost me to 2nd in individual standings. I have amassed a considerable history with this incredible species and will be targeting them during any available window between now and early-April.