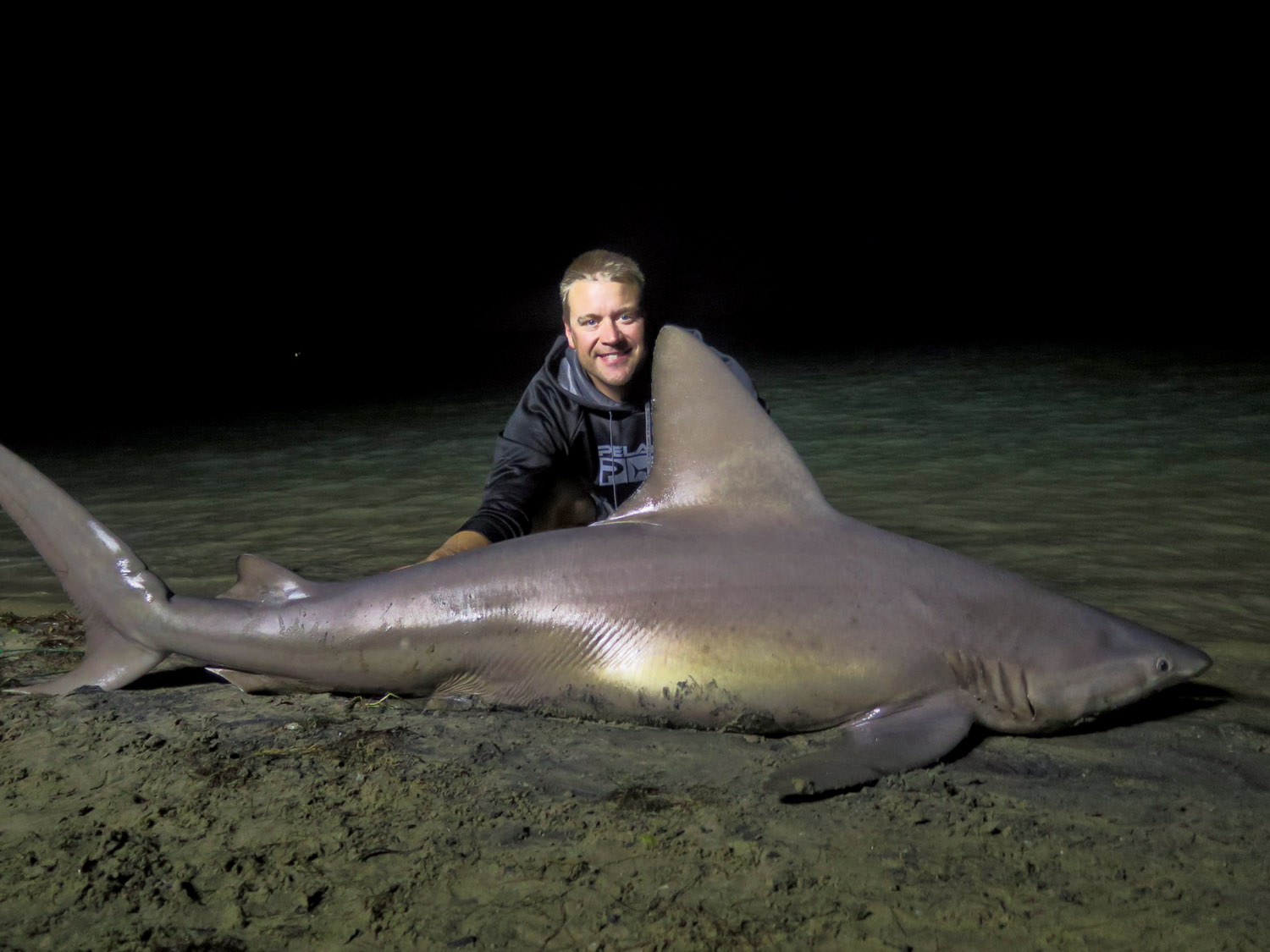 Author poses with a large sandbar on the beach – Released!

There are so many aspects of the outdoor world that interest me. During the winter, the chaotic action of skipjack, mackerel, and other inshore predators fades with the water temperature. In this cooler season, many anglers (me included) begin to focus on hunting in some amount. I have to admit that even I have become more interested over the years in the pursuit of the other “big game” but my true priorities are and ALWAYS have been the surf.

Quite often December’s cold fronts will blow relentlessly for a couple days at a time. This onslaught of north wind eventually passes and on the second or third day following a front the South Texas surf comes alive again. Red Drum remain in the surf and begin to feed. If water clarity is above average, the pompano fishery explodes with action as they rummage the shallow guts and bars for plentiful coquina clams. Also during this unique period is when the largest of our wintertime sharks come prowling the shallows – the sandbar shark.

The majority of our coastal shark species venture offshore into deeper, warmer waters during winter but often present and chasing anything from small stingrays to abundant whiting are the sandbars. Interestingly, we are just recently beginning to understand this species.

The sandbar shark (Charcharhinus plumbeus) is a federally protected species that were once very abundant on the east coast of the United States. Through commercial overfishing, this species, like many other sharks, have dwindled in numbers.

Sandbars are a robust predator. If you were to crossbreed a blacktip and bull shark, you would essentially achieve the physical characteristics of a sandbar. Highly aggressive, and sporting a large and intimidating head with equally large teeth, sandbars possess the fast swimming trait of the blacktip and are known for their acrobatic jumping – similar to blacktips and spinner sharks. Size-wise, sandbars typically larger than blacktips and, like the bull shark, they attain lengths of seven feet or more. Overall, sandbars are a very respectable shark species.

Texas is both a mating and pupping ground for sandbars. Mature males and females come to certain areas and stage for this purpose. These occurrences are both time and weather specific; sandbars are usually present in greatest abundance between November and March.

Considering that I am a year-around surf fisherman, and have been most of my life, I have tangled with my share of these toothy critters. A very interesting fact with some of my personal sandbar catches is the recapture data. I have been tagging sandbars for various research groups more than fifteen years and have recaptured some of my own as well as other’s tagged specimens – years later in some cases.

Most incredibly, these fish were often recaptured within a few miles of the original tagging and release sites. Proof that they return annually to very precise locations.

Despite their wintertime abundance, only a small number of dedicated surf anglers have actually landed a sandbar. This could likely be attributed to the general unwillingness of many to kayak baits offshore during the cold days of winter.

Why do I love pursuing this species as much as I do? Well, essentially, they are a formidable opponent. In addition to their brute physique, “sandies” also possess a very large, triangular dorsal fin. This broad fin is unmistakable upon first sight and aids in the hydrodynamic steering of their beefy body, contributing to a strong fight. It is very impressive to see a 200-pound shark go aerial when hooked from the beach, which can only be outdone by the majestic displays of the less-common mako.

Much like many other inshore shark species, sandbars will hunt down any easy meal available in the shallows. Some of their favorite prey are whiting and pompano. On the other end of the spectrum, they are not shy in taking down even the largest late-lingering jackfish or mature sheepshead. The sandbar diet includes many options and, if conditions are just right, can offer exceptional sport for anglers willing to brave the elements.

Even though the sandbar is considered an inshore species for the amount of time they spend along our coast, casting baits for them is usually not a productive option as they mostly tend to prowl the deeper second and third guts. In fact, as far as I am aware, only a very limited number of sandbars have been taken on baits cast from the beach. Having said that, your chances can be improved with specific techniques and rigging methods.

The best bait I have found is a large whiting. The bigger the better, deployed with a single 20/0 or 24/0 circle hook. You don't need an especially long leader, but you do need something of sufficient length to avoid being cut off should the shark roll back on the leader if it breaches or jumps. My personal preference is one of several Catch Sharks leaders, ideally the Surf Ninja Series or anything similar.

The single circle hook should be placed either through the head of the bait or through the midsection. Hookup ratios are usually good with sandbars on these smaller baits versus larger offerings such as jackfish. Once hooked up, hang on and enjoy the fight. They will test you the first few minutes but end up obeying your direction if played properly. One thing is certain, this is a fun shark to catch!

Of all the shark species I have handled, sandbars are known to display a most aggressive temperament. Even compared with testosterone-filled male bull sharks or healthy, pregnant blacktips, sandbars are nothing short of ferocious on the sand. Every individual shark commands respect but sandbars especially require an extra amount of alertness when handling. Don't be fooled by their size, they can easily curl up on themselves and you do not want to be in the line of fire if their jaws are open.

A sandbar shark is the only species I've had a serious run-in with on the sand, an encounter that sent me to the ER. A couple repaired tendons later I was back in action. Still, ten years later, I am more cautious than ever with this species.

Danger notwithstanding, I continue to target sandbars every winter, and I also enjoy the ability to put anglers of all ages on them. Whether for the joy of an avid angler crossing a coveted species off their list or a young individual amazed by a true wonder of the natural world, everyone has a tremendous smile glued to their face. Wintertime charters are always hard work and often quite challenging but the reward can be the angling thrill of a lifetime.