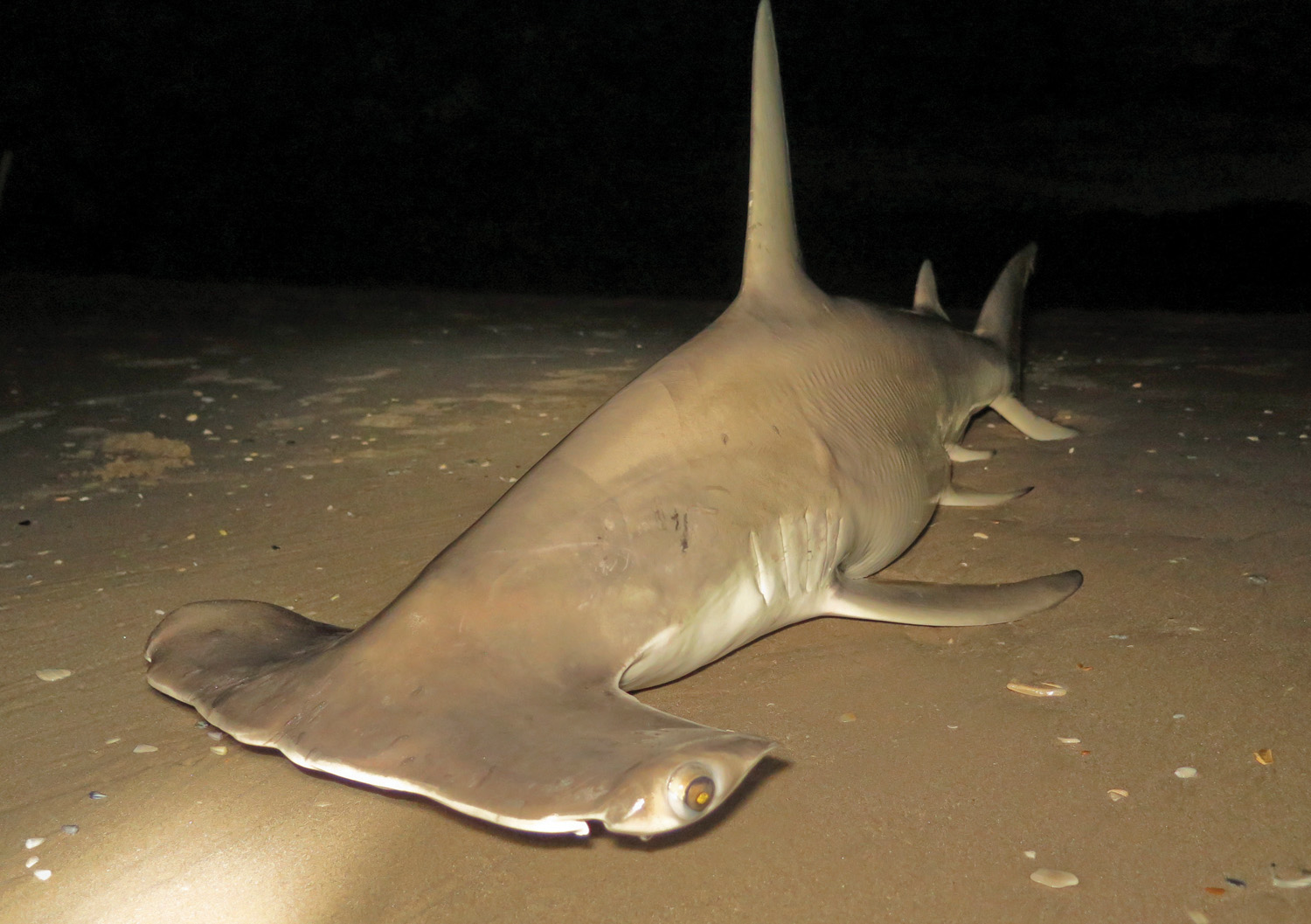 Hammerhead caught, tagged and released from the PINS surf.

I have always had a profound respect for the unique and remarkable creatures that frequent our waters. As we progress further into the spring season, a multitude of bait species and predators storm the surf zone, dispelling the misconception that sharks and other big game reside only in the deepest of nearshore waters. Your first glimpse of a bull shark patrolling knee deep water can you get to rethinking a swim at the local beach. Fish big and small are all in shallows to take advantage of the feeding opportunity this time of year. For anglers, this means the ability to cast baits for big sharks.

The spring months are traditionally a time of raging wind-driven currents. Tough for angling. Those seeking shark action typically employ kayaks to place baits several hundred yards from the beach, but using the kayak in this manner is relatively modern. While the newer generation of shark anglers have more or less grown up believing that kayaking baits is the single-best method to target sharks, nothing could be farther from the truth. Fact is – sharks and other large fish commonly run the first gut in their search for prey. So long as water clarity remains decent – the rougher the water, the closer the sharks actually come in. So many people have over-analyzed methods and procedures that they don't realize the simplistic nature of things. Bottom line – while a great method - you don't necessarily have to kayak out huge baits to catch huge sharks in late-spring.

Larger shark species move in during May chasing everything from whiting to red drum and jack crevalle. It is well known that scalloped hammerheads run the late-spring beaches and the majority are actually caught on close baits, often on baits casted from the sand. The scalloped hammers have very small mouths compared to the size of their bodies, which means they usually take smaller prey, and nothing seems more to their liking than whole, fresh whiting.

Whiting can be caught on rod and reel, bottom fishing, using fresh-peeled shrimp or Fishbites. A large whiting weighs about two pounds – perfect-sized bait for scalloped hammerheads. My surf charters that have produced scalloped hammers have nearly all been caught on whole whiting casted from the sand, and many times on lighter rod and reel setups that cast these baits more effectively. But – given that scalloped hammers are speed demons – line capacity comes quickly into question. You do not need a giant reel, but make sure you have at least 300-400 yards of line available to fight them.

May is also known for producing the occasional lemon shark. While common in Florida and other parts of the Gulf of Mexico, lemons are fairly scarce along our coast. On south Texas beaches, there is usually a small window in May when they can be encountered. They may not be the most powerful fighters but they can attain lengths of 10-feet and several hundred pounds, which is quite formidable in itself. As with the scalloped hammerheads, lemons are often caught in the first gut and much of the time on a casted bait.

The mouth and jaw structure of lemons is more typical of sharks their size and are able to take in larger baits. However, since they are more of a “relaxed” feeder, they will eat anything they can find and that usually includes smaller baits such as whiting and skipjack. Both of these baits can be rigged for easier casting. I have caught more tigers off our beaches than lemons, so every lemon landed is a very cool experience. Our Texas lemons will average just over 8-feet but I have landed monsters up to 10-feet.

Perhaps the most active inshore sharks by far are the blacktips. These medium-sized predators prowl the shallows and at times can be seen swimming in water less than two feet right next to shore. Blacktips are very aggressive and despite maxing out at just over 6-feet, they will take a bait of any size. We have caught large blacktips on baits from the size of your fist to as large whole jack crevalle. They seem always hungry and are usually found where bait is most abundant – often in the first gut. Fresh whiting is again an excellent bait. One of the few shark species known for aerial leaps and flips when hooked, it is always a thrill when a 100-pounder explodes out of the water at short range.

In shark fishing, no species dominates inshore like the bull shark, which incidentally are also responsible for the majority of shark attacks on humans, worldwide. Texas has a healthy bull shark population, large and small. The upper coast is a nursery for bulls and waters along Galveston and Matagorda islands teem with them. Bulls are typically larger In south Texas, averaging a bit more than 6 -feet. On occasion we will get a run of big bulls in excess of 8-feet. Bull sharks care nothing about water depth, they will swim as shallow as needed to obtain prey. While we get bulls during both day and night, a good casted bait at night, whether a slab of stingray or whiting, will often entice a bull. Bulls, though very aggressive, are not the fastest swimmers but will devour anything in their path to make up for it. Many 300-pounders have been caught on baits casted into shallow water.

As spring turns to summer Mother Nature presents increasing opportunity to hook into large fish. Whether highly-energized jack crevalle or large and hungry sharks, no water is too shallow for any of them to feed aggressively. Blacktips and bulls will patrol the first sandbar and, if you are wade fishing or casting a shark bait, you may get a sudden surprise. Fortunately, unless it is a large feeding bull, you should have no problem as the instant they detect your presence they will flee back into deeper water.

Any organized bait “trains” running the beach, whether mullet or menhaden, will likely have sharks in tow. Be sure to have a rod rigged and ready for sight-cast opportunities while driving the beaches in the morning hours. Not many people can say they have successfully sight-casted a shark from the beach, but if you happen to be so lucky, you will understand the thrill!