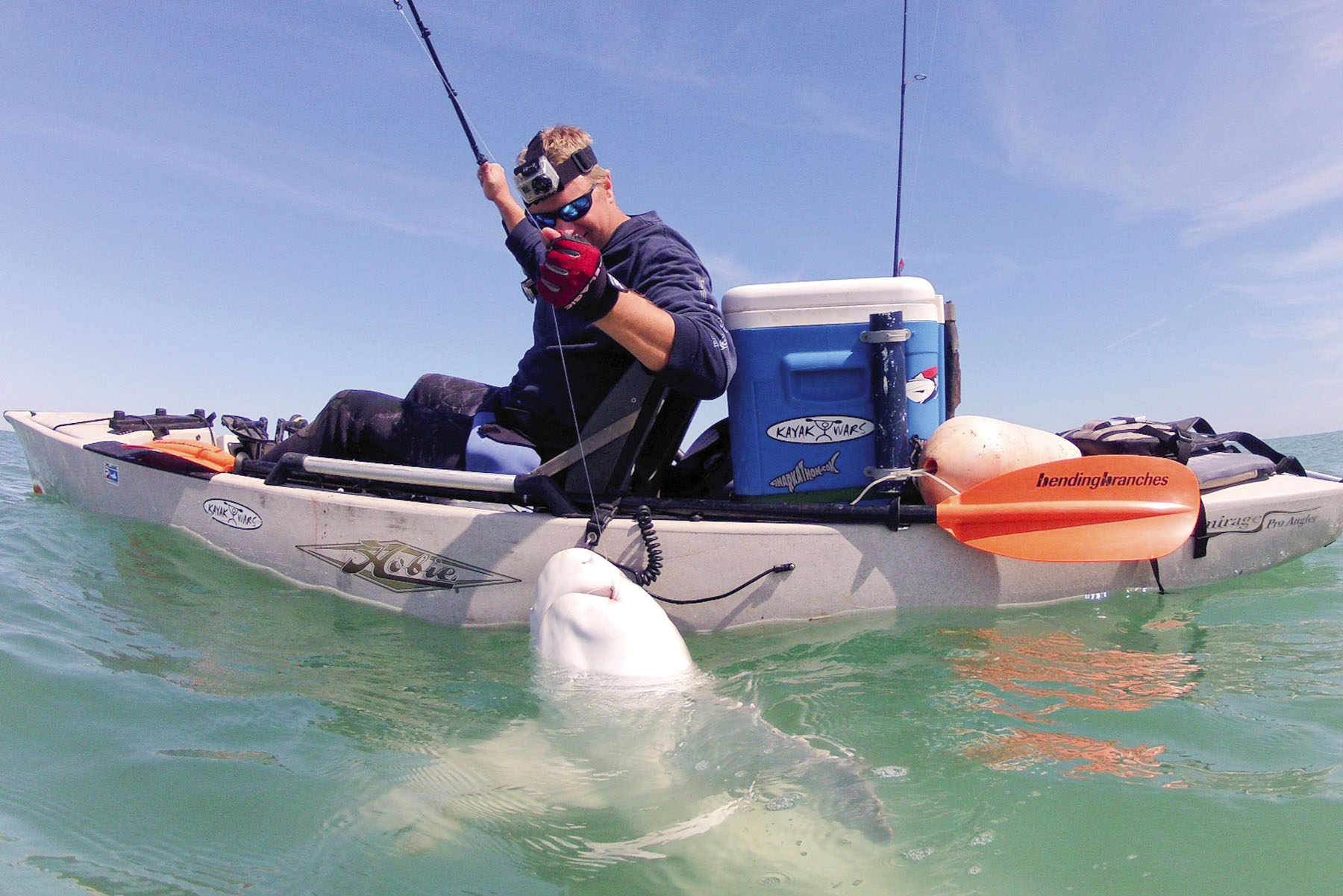 Sandbar shark.
Dragging my beat-up kayak over shell and sand and finally into the breaking water, this is how so many summer mornings have begun. The greatest beauty of these adventures is the mystery of what might lie ahead. What marvelous chaos will I get into today? With slick calm seas and fading echoes of feeding gulls, I am in pursuit of king mackerel on topwaters. Tucked behind my seat is another rod rigged for cobia just in case one comes alongside. With the sun just above the horizon I reach an area with predatory action on the surface. I quickly begin plugging and it is not long before the kingfish are cooperating. Fish are slashing the surface and rocketing out of the water. I launch the lure again and violently jerk the oversized tuna popper across the surface. The lure gets crashed leaving a car-bomb boil. What is this beast?

Fifteen minutes into a "fee-free" sleigh ride I have the fish under the kayak and its brute strength shows me it is NOT a king. A few more minutes pass and I pour more strength into the fight, testing the rod to its full capability. I work the fish up from the depths and finally I see a dark figure and then the unique profile. The culprit in this brutal attack on my popper is a nearly six foot blacktip. While not exactly common, these instances do happen.

I have caught sharks on many types of bait and also on lures while pursuing other large gamefish. If there are birds and bait on the surface, rest assured that sharks are probably lurking nearby. Miraculously, I was able to remove the treble hook from the corner of this fish's jaw. In most instances, your only option in regards to safety for yourself and the shark is to simply cut the leader at the hook.

Having spent half my life pursuing sharks, I have witnessed some unbelievable spectacles these creatures have to offer. They are hungry and forever on a feeding mission. I have encountered a great number of sharks from the kayak and have learned to remain as calm as possible and think clearly about what I am doing. Unfortunately, with the sport of kayak fishing exploding in popularity, newly-introduced anglers find themselves often in unexpected situations. For any who have ventured offshore in a kayak and never experienced a shark encounter, just know that while you didn't see them, sharks were likely below, escorting you at some point. Ironically, you are probably in more danger of a free-jumping blacktip than you are of let's say a man-eating tiger shark attacking your kayak. While often merely curious, sharks are just another part of the marine ecosystem. And when you paddle out there you are in their realm.

The majority of my kayak-caught sharks were actually by-catch while targeting other species. Regardless, you have to be prepared to deal with them. Usually, any shark less than six feet will tire after dragging you around for fifteen minutes or so. At this point they are much easier to handle, allowing you to remove or cut the hook. I highly recommend that you have a good pair of diagonal/cable cutters handy at all times. Shark hookups are always a possibility when drifting baits for kings and also when dropping for snapper.

I once hooked and fought two large scalloped hammerheads on back-to-back drops fishing for snapper from the kayak. The first hammer made an incredible display before breaking off. The second dragged me fully two miles farther offshore before I was able to land and release the eight foot beauty. Whether two feet or twelve, all sharks demand respect while in and alongside the kayak.

Blacktips, bulls, and Atlantic sharpnose are our most common. However, you just never know. We see some remarkable things kayaking offshore, giant manta rays and sea turtles the size of a Volkswagen Beetle exploding to the surface right beside your boat. NoI am talking about something even more magical.

The tale I want to relate happened to me and two buddies on a blistering summer day. Despite the cool-water currents curving into the coast off Padre Island there were birds and bait galore. Three of us landed and released a total of eighteen king mackerel, up to 60 inches. This is where things got interesting.

With the topwater bite waning we switched to drifting ribbonfish. Our hopes for a STAR-contender king were still alive when Kevin hooked a slow, powerful fish. Certainly not a king - we first thought perhaps a large loggerhead turtle or maybe a foul-hooked manta ray. After an hour Kevin was tiring but still all game. Kip and I followed carefully and the fish was towing Kevin as easily as a rabid pit bull might drag a small child clinging to its leash. All he could do was hold on and try to wear it down.

The battle raged on and on; Kip finally paddled back to shore to grab some lunch. When he returned Kevin was still locked in the slow tug-of-war. Finally it yielded to the pressure and we could see the caudal fin of a shark coming to the surface... a VERY BIG shark. The tail waved at us and descended several times, dragging Kevin in a half-mile circle. Kevin was growing very tired and the Avet LX had withstood nearly 2-1/2 hours of abuse. Each time the shark came to the surface we would get a better glimpse but still could not identify the species. There are not many 10-foot-class sharks in our inshore waters other than hammers and tigers, and this was definitely neither. A few more minutes of Kevin putting in every ounce of his reserve energy and finally the mystery fish cooperated. Dusky sharks are not very common in the Gulf these days, especially this far inshore, and Kevin's was a true gem.

After some teamwork we managed to get the shark stable and shoot some video to document Kevin's feat. To our astonishment the simple wire kingfish leader held up as Kevin landed the largest shark I've seen caught from a kayak. When the time was right, we cut the leader at the hook and the shark swam back to the depths as if nothing had happened. It is amazing, all that had to occur in perfect order, to accomplish such an incredible "accidental" catch. It also makes you wonder about the possibilities of encounters yet to come.

Personally, this is my quest. Whether sharks or other large gamefish, moments like this are meant to be cherished. With this large shark, everything worked perfectly during the catch and release of a potentially dangerous giant. In its wake was a memory that will remain the rest of our lives.