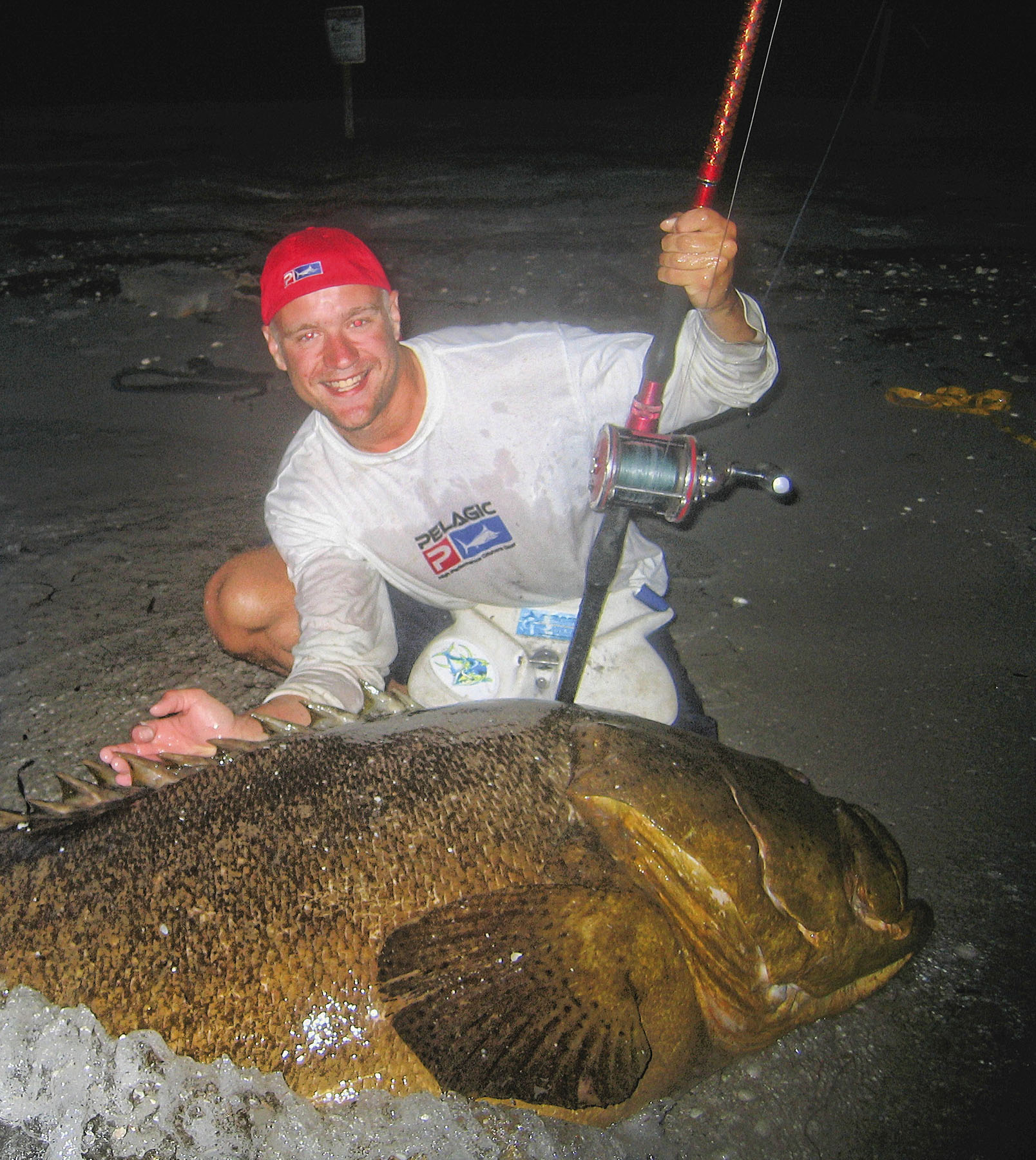 One of the most alluring aspects of shark fishing is that quite often you have no idea what might pick up a bait. During June there is an abundance of shark species cruising the PINS beaches yet many lengthy and backbreaking battles end with the discovery that your fish was not a shark at all. The term bycatch originated in commercial fishing to describe the unintentional capture of a species they were not targeting; bycatch is usually discarded. Bycatch though takes on a whole new meaning when applied to shark fishing. Given the type and size of baits deployed and the tackle commonly used, a shark fisherman's bycatch can include some real sea monsters as well as lifetime trophy sport fish.

I have been fortunate to have caught a lot of trophy fish during my relatively short career. I can also say that I have caught several astounding fish by mistake while fishing for sharks. Over a decade ago I had my first encounter with a massive yet accidental "non-toothy". In the heat of summer I was blasting out small/medium baits hoping for a cruising hammerhead one night. Munching down on a generous portion of ramen noodles during one mosquito-ridden evening, I had a bait get rocked. I was confident that this was the hammerhead I had been anticipating. The speed that the fish ran after picking up a large skipjack helped support my theory. Doing battle on medium shark tackle was fun yet not easy. After a solid half hour I finally get the fish in the wade gut. While still confident in my opinion that it was a hammer, I walked out to leader the fish. Interestingly enough I could not detect the large dorsal or caudal fin that should be present. However, I definitely felt a good portion of weight at the other end of the leader. Managing to finally pull the leader up on the sand I look back and there lays the largest tarpon I've ever seen a remarkable 7-foot class monster. My eyeballs were larger than the truck's headlights that were shining on the fish.

That fish was responsible for a great deal of unintentional yet beneficial publicity towards me. Even though the fish that was released was a tarpon, I was locally issued the stamp of approval as a shark fisherman. As a young, broke college kid this gave vintage Oz even more fuel for the fire. Ironically, some of the largest tarpon I have seen caught have actually been during the process of shark fishing. When conditions are just right, the chances of a hungry silver king crossing paths with your well presented bait make a unique catch a possibility. It was several years later when Gabe Goodman and I were banging out some October blacktips one evening when he hooked into what we thought was a quality shark. At the end of the battle I go out to leader the fish and once again - no visual signs of a shark. I am knee-deep searching and the light from my headlamp eventually reveals two large reflective glowing eyes. In all honesty, at the time it was a very creepy feeling. That fish ended up being a tarpon that even eclipsed the size of my beast. Once again, the unlikely suspect picked up a medium-sized bait deployed for a shark. Yet, in the end the fish was a superb trophy which big game enthusiasts search and travel the globe to attain.

We have many respectable game fish in Texas, and many get quite large. In truth, while utilizing small to medium baits for sharks, you have the possibility of catching several different species of these. Another welcome surprise from my surf archives happened during a menacing sargassum-filled spring. The weed was a horrible nuisance, but with the weed comes predators. A couple of us were enjoying the blacktip action that we certainly had to work for. Maintenance of clearing the lines of the seaweed was tiring but also rewarding. While reeling in what I thought was just another five foot blacktip shark, I notice something different when up close. The water was fairly clear yet the scattered clumps of weed helped camouflage the fish. My buddy John went out to handle the leader and yells "Hammer!" I then too was able to see the hammerhead and that got my adrenaline pumping. The shark though is NOT on the end of my line, yet is following what actually is. John drags the leader up and flopping at the edge of the surf is a large cobia.

I have caught many cobia (mostly offshore) but this one ranked amongst one of the largest I've landed. This was yet another example of a delightful bycatch while targeting sharks. It is true that the smaller the shark bait you have out, the greater the likelihood of a fish such as a cobia or even something else that might pick it up. On the upper coast, surf anglers attempting to catch sharks on cast baits are often fooled as well. While shark fishing, these anglers will catch some of the largest red drum you will ever see. It is not uncommon for a healthy breed-stock redfish taping out at nearly 50 inches to suck down a shark bait. These fish of a lifetime are more of a nuisance than recognized trophies for shark anglers. An equally unsuspecting foe that is notorious for picking up shark baits in the baking doldrums of summer are enormous stingrays. If you put out a whole whiting for bait, you better hope that a shark finds it before the rays do for they have an uncanny taste for these smaller fish.

Perhaps one of my most shocking and surprising moments behind the rod happened also from the surf, but this time in the Sunshine State. On a strategically planned fishing trip to Florida with a few good fishing buddies several years back, one of our main goals were to target large sharks from the beaches. We would kayak our baits out starting around dark and wait for the sharks to arrive. The blacktips and bull sharks were present and we had just released two decent lemon sharks back to back. Late and out of bait, I stitched up a previously used jackfish that caught the last lemon. It was a Frankenstein bait of sorts, but it was all that I had. It was not very long and a fish picked up the already mangled jack crevalle. This was a brute. Immediately I thought - massive bull. The power displayed was rivaling anything I had fought before. Could it be a Florida tiger shark I was thinking to myself? I was being led up the beach battling this creature. Despite not being harnessed in, I did have a fighting belt. This I can honestly say was the only fish to have ever brought me to my knees - but I did not give up.

The battle waged on for what seemed like hours when in reality was approaching less than 60 minutes. The feeling of excitement to see a massive shark for the first time and to reveal its identity cannot be described. My good friend Todd went out to leader the fish, which was thrashing violently in thigh deep water. We could tell even in the dark that this was a huge fish with obtuse proportions. Being led away from camp and directed up the beach, we were limited on light with most of it being from the moon. Todd grabs the leader and struggles. With the help of a few gentle swells from the surf that help push the fish closer to the beach, he discovers that it is not a shark it is literally a goliath! The enormous fish now resting on the sand was a huge goliath grouper we estimated near 400lbs. We have never seen one in person before so this was truly a magical moment. I can vividly remember this fish beating its tail on the sand and sending a shock-wave through the sand. Simply incredible. After a few quick photos and measurements, we walk the giant grouper out for the release. This totally unexpected fish was a result of yet another accidental bycatch turned epic, all due to pursuing sharks.