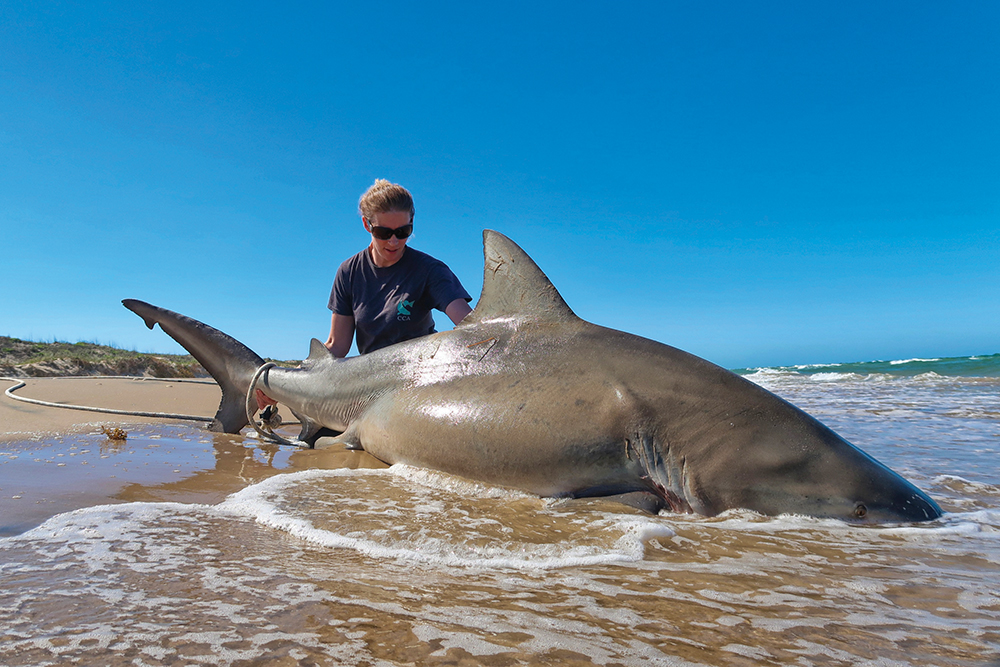 I view shark fishing from the beach as an artform more than a rigid science, an activity that affords lots of opportunity for individual expression. Through my career I have benefitted from knowledge and information handed down from my surf fishing predecessors. These “brothers on the sand” helped direct me in my early years and I used these to perfect my own game, experimenting endlessly to develop techniques to outsmart the creatures on the other end of the line. With technology in heavy-duty sharking gear continuously on the rise, I try to stay a step ahead to exploit the possibilities. To me, shark fishing is more than just putting out baits.

There are but a few companies producing terminal tackle directed to the shark fishing market – especially in the area of leader and hook applications. Of those, the majority are very basic and only capable of producing fish from time to time. Heck, I've even seen sharks caught on weed-eater line. Would I ever use it? Not a chance!

What it boils down to is that there are specific reasons to use more reliable gear. With as much time as I invest chasing these apex predators, I firmly believe that quality and craftsmanship greatly surpass the average product on the market. There was a time when I was aware of only a single online tackle source that offered such quality. It also happened to be the only product line worthy of my personal endorsement.

This small company, cleverly and rightfully named Catch Sharks, catered to shark (and surf) fishermen nationwide. Their innovative leader designs made me a fan from the beginning. A little over a year ago I had opportunity to acquire the Catch Sharks company. I knew I could expand on the foundation they had created, and in 2018 set about to re-launch the company and its product lines.

I became obsessed with raising quality standards to levels hardcore sharkers had never seen, incorporating newer material technologies with personally-proven designs. The greatest innovation in the evolution of Catch Sharks products has been the introduction of Tru-Sand™ coating technology. This unique coating essentially camouflages the hooks and other terminal tackle to match the sandy bottom. With use of ultra-clear leader material and sand-mimicking coated cable, these leaders are as near to invisible as one can create. If even one shark chooses to take a bait from this leader over another brand or design, that within itself is an advantage.

We were able to conduct many tests and trials with Catch Sharks leaders during 2018, and surf anglers all along the gulf coast succeeded in bringing some of the largest sharks of the year to the sand. Ray Cedillo used a Catch Sharks leader to land a fourteen-foot hammerhead, quite possibly the largest shark landed on any U.S. beach last year. I personally landed a great number of sharks that measured between 8- and 11-feet during last year’s testing. I am very proud of what I have been able to add to an already great product line and we are hopeful of even greater success in 2019 as further design improvements are incorporated.

New products for 2019 that utilize Tru-Sand™ technology include the Hammer-Time™ Series – Legend Edition™ and the Hammer-Time™ Surf-Saga™. The Legend includes a fixed, 20/0 non-offset circle hook with proprietary barb reduction for easier hookset and removal. (Note that effective September 01, 2019, new regulations from TPWD require shark anglers use only non-offset, non-stainless steel circle hooks for shark fishing in Texas waters.) The Surf Saga™ offers the ability to interchange the hook drops. While both of these were designed for hammerheads, they work equally well on other species.

Being a fishing charter guide and having a tackle business provides uncommon opportunity to use and test products with my clients. With my charter schedule packed tighter than a can of sardines, I was quite excited in early April for the arrival of Ron Ulseth, a favorite client from Minnesota. Ron and his wife Wanda have been happily married fifty-four years and have taken several springtime adventures with me. Their stay in Texas was extended to May this year which allowed for some heated shark action.

Ron and I headed down Padre Island National Seashore to find the jack crevalle running rampart. Jacks often travel with big sharks in tow and jack action has been lackluster the past three years. Up to that point Ron's largest shark was just shy of seven feet. The presence of the jackfish gave us confidence that we were about to beat that.

After playing with the jacks a couple of hours, we rolled farther south where water and currents looked optimal for our outing. In early afternoon I set out big gear with big baits. I rigged roughly three-quarters of twenty-pound jack as single baits with two hook drops. I set two rigs, one on the Catch Sharks Tiger Tamer leader and the other on the new Hammer-Time. I typically set three big rods but the sharks found us before I could get the third one out.

Ron climbed atop the truck platform and strapped in for battle. It was interesting and satisfying seeing a “northerner” strapped into the 80W and doing battle like a pro.

Meanwhile, the other 80W bait was getting hit. I let that one sit while Ron continued battling his shark in textbook fashion – a healthy 7’-2” bull. Being his career-largest fish, we celebrated briefly with photos and accomplished a successful release.

With that done I instructed Ron to hop back up and check the other rod. Sure enough he was hooked up with far greater resistance on the line. Ron proceeded to conduct a lengthy but efficient battle with what we thought was his second fish. This one appeared to be of much greater mass than the previous and we were very optimistic.

Roughly thirty minutes passed, Ron had the fish in the first gut and I went out to leader it. Once out there I was presented with a most unusual surprise. Not one, but two big  sharks were on the leader. I grabbed the Surf Saga leader and worked them both to shore. Ron was exhausted but his fun factor was through the roof. At seventy-five years young, he had just wrangled two seven-and-a-half-foot bull sharks, at the same time, on the same rod!

So, was Ron's catch a testament to the quality of the gear and its design? Perhaps. But over the course of the following month we continued to put the gear to equally severe tests. On the very next trip, using the Hammer-Time Legend leader, we put a massive lemon shark on the sand. Stay tuned for the story in the July issue.

The following weekend, on a three day charter, Molly Kuehl landed the first hammerhead on the new leaders, a large male scalloped hammer.

With a break in my relentlessly busy schedule, I found a break at the end of the month. The weather forecast looked promising so Alexis and I headed down with our six-month old daughter for a beach trip. My primary goal was to get Alexis on a big shark since she has been missing out doing mommy duty at home. This trip turned out to be quite memorable.

As on Ron's trip I ran three-quarter jackfish for bait. It was slow through the morning but picked up by early afternoon. Alexis landed and released a quick blacktip. Not massive, but we knew bigger fish were out there. Then late in the afternoon a fish picked up a bait and took off for Cuba.

I got her up on the truck and strapped in for business. My job at that point was tending the baby, who was acting delightfully goofy amid the excitement, while Alexis was hooked up to what appeared to have potential to be the largest fish she had ever battled. I was eager to see just how big it was, guessing by the way it fought and “bulldogged” it was a bull shark.

After a 20- to 30-minute struggle, Alexis brought it over the second bar and into the first gut. I headed out to perform the leader chores with friend and fellow sharker Matt Ellis lending a hand. We pulled the beast up on the beach and were amazed. A massive female bull that taped 8'-10" with a hefty 63" girth – one of the largest Texas bulls I've seen. Together, Matt and I tagged, made photos, and release the beautiful giant.

I am very proud of Alexis for her phenomenal catch. We are also ecstatic that she caught it on the newly designed gear. Did the recent design modifications play a role in enabling the catch? Such questions are difficult to answer conclusively, but the leaders are certainly producing great results thus far.

Check out the continuous developments and innovations at CatchSharks.com