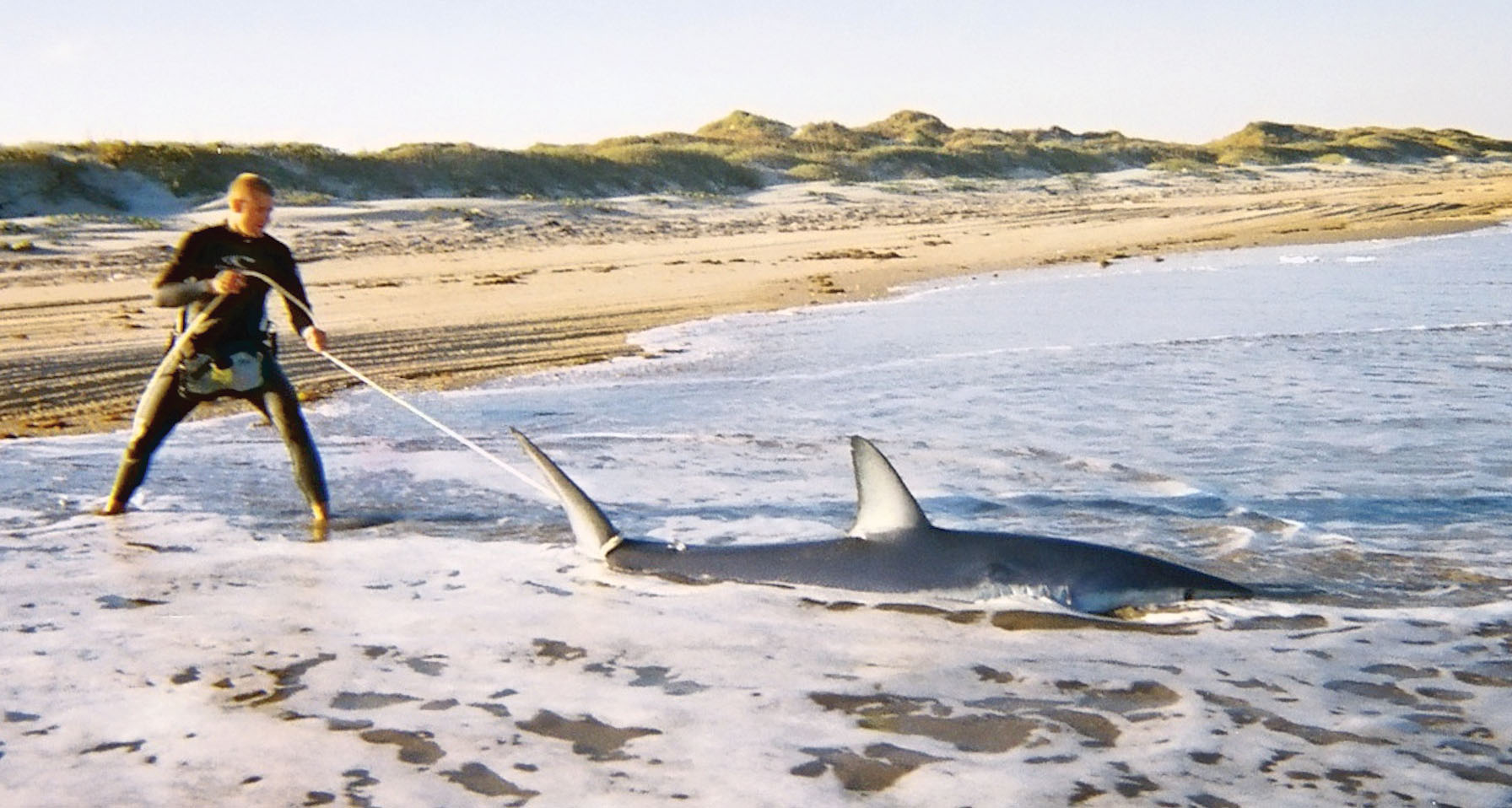 The author with mako landed in the PINS surf – truly rare – preparing for tag and release.

Deep within my aquatic soul boils an uncontrollable obsession in the shape of an iconic dorsal fin. It compels me daily to seek encounters with those wonderful and intimidating creatures of the deep we mundanely and collectively refer to as sharks.

As a child I remember the commercials for the early years of Shark Week. Growing up in the 80s my family did not have cable television, thus the luxury of the Discovery Channel did not exist in my household. My inauguration came by accident in a hotel on a family vacation to Florida. The show was presented as a scary yet informative look into the world of the greatest apex predators that inhabit the planet. That was 25 years ago and I have been wildly fascinated with sharks ever since, watching anything on television dealing with these frightening creatures. Fascination grew into obsession. Now, two decades later, not much has changed. For me, shark week is 52 weeks out of the year.

My fascination from the very beginning wasnt with the horror that has been unjustly bestowed upon these animals, but the display of their true dominance and purity within the oceans. Sharks are the product of a near-perfect creation of life that has evolved very little over the course of millions of years. Back eons ago in my own schools library, while trying to work cooperatively on class projects, I would venture off toward the Life & Science sections picking out shark related books and literally draw in the mystery of these remarkable beasts.

One of the books I found as a youngster was by the legendary Jacques-Yves Cousteau titled The Shark Splendid Savage of the Sea. Other books I found displayed the shark as a fearful, primal enemy to humans. In this book, Jacques and his son Philippe expressed the wondrous and intriguing aspects of the various shark species. I was recently reconnected with this book when I randomly stumbled upon a pristine copy of a 1970 print in all its glory with 124 color photos to boot!

Cousteau was the pioneering explorer of the oceans and traveled in his research vessel, RV Calypso, to document incredible marine life, much of it newly discovered to science. While not realizing it fully at the time, the famed Jacques Cousteau would play a key role in my developing obsession with sharks.

As an adult (if I ever did truly grow up), my Calypso is my beach vehicle. My Calypso is also my kayak and any offshore vessel I happen to board. I often document and film as much as I can, though perhaps not quite to the extent or finesse of Cousteau. Each adventure I embark on is in high hopes of the encounter. I am relentless and think about sharks around the clock, non-stop. My eyes are continuously glued to the weather/wind/surf forecast and within all my areas of fishing opportunities, sharks are and will remain top priority.

Ive been fortunate to catch and come in contact with some very inspiring specimens, big and small. My more exotic and rare catches far offshore from Texas waters include the smooth dogfish shark, oceanic whitetip, and chain catshark. In the Cousteau parody film The Life Aquatic, the menacingly elusive jaguar shark is amazingly similar to that of the deep-water chain catshark which as been known to glow with bio-luminescence. Back on the Texas beaches, Ive been lucky enough to tag and release a large shortfin mako and an equally large dusky shark, both incredibly rare and virtually unheard of this far inshore. Wherever it may be, each new species I catch or see is an awe-inspiring treat and will never get old.

With the exception of us the selfish human race; sharks are the worlds supreme apex predator and can be found in all the oceans and then some. To put things in perspective, I have caught sharks from the piers, kayak, jetties, inshore passes, deep offshore waters, from the surf, out of the state, and out of the country. However, the majority of the time, my personal research lab is the south Texas beaches. My entire adult fishing career has mostly been focused around chasing sharks, usually from the sand. Various species make their rounds throughout the year so there is virtually no off-season. The more time you put in, the more you realize there are optimal periods to fish and not to fish for sharks. I had been guilty back in college for skipping an exam or two to hit the beach for the fall bull shark run. However, during those periods where sharking will likely be slow or tough, Ill resort to kayak or offshore fishing - though the thought of sharks will roam continuously through my mind.

One of the greater joys of shark fishing is the mystery. You NEVER know exactly what fish will pick up your bait. Often times you are fishing for sharks in general but have the opportunity of hooking into one of at least a couple dozen different species in your region. Over 400 unique species of sharks have been scientifically documented. My continuing goal is to encounter and come in contact with as many of these fiercely majestic creatures as I can. Right now my number is right around 30 and grows every year. I randomly dream about catching another species from our waters to add to my increasing tally, sometimes a freakishly large thresher or a prehistoric-looking six gill shark. Catching a rarity in a weird way can be as self-gratifying as winning the Super Bowl. Interaction with them fuels my thirsty obsession.

The majority of my big-shark trips down the beach target tiger sharks. Ive caught tiger sharks in six different months and they can be targeted throughout much of the year. Tigers are among my favorite for a variety of reasons. They are in a family of brutes within the shark world, and have an appetite to match. The younger specimens have vivid stripes (hence the name) and their serrated teeth are designed to crunch through anything in nature. To me the tiger truly defines the word shark. They can grow to be massive and menacing, with a mouth full of razor sharp trouble.

Every day of my life revolves around the next promising window to blast big baits out into the surf hoping to encounter the next graceful giant. My life contains few boundaries restraining me from my continuing shark quest. Things often get put on hold and obligations get delayed. Unfortunately, that is the price I have paid for the obsession that consumes me. With that being said, Im not sure Id want it any other way!