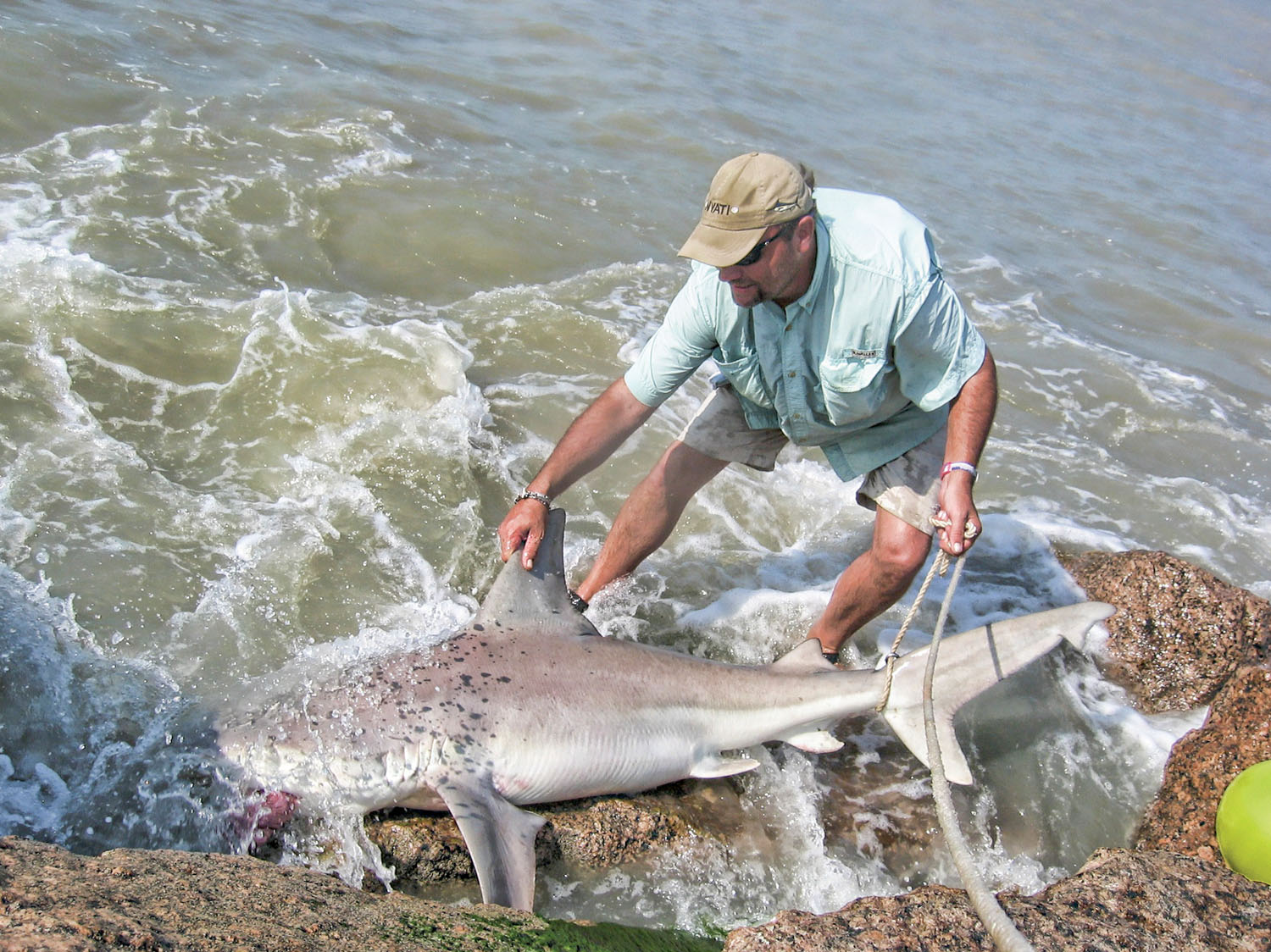 Whether as a hobby or career, life on the water always poses risks. Commercial crab and lobster fishermen have some of the most dangerous jobs on the planet. Yet they do it for their love of the sea and quest for adventure. Down here in warmer climes, catastrophic conditions are not nearly as common - minus the rare tropical weather event. Nonetheless, this is still Texas and our weather is as wacky as it gets. Our conditions while tough at times, are generally conducive to a range of outdoor pursuits and participation is high year around. Typically, your light tackle outings are relatively safe, accidents are statistically low and few are life threatening.

My sharking career spans 15 years on a recreational level and my fascination with these creatures has always been strong. Having handled hundreds, if not thousands of sharks, you continually gain respect and further knowledge regarding the various species. Each species utilizes a specific set of behaviors and each specimen has a unique personality. It is quite astounding that with such large numbers of people taking to the water along the Texas coast that we have such a tiny number of shark attacks. Swimmers and fishermen parade around in shallow surf yet the staggering numbers of sharks present rarely cause any sort of issue, let alone an attack. Our Florida counterparts are not so lucky, with a number of gruesome attacks annually. Is this due to lack of bait and/or even higher shark populations? Regardless, Texas remains fairly safe when it comes to shark incidents. In truth, your average Texas beach user has more to fear from stingrays and jellyfish.

Then enter the small but fearless percentage that are Texas shark fishermen and danger escalates off the chart. There are so many variables to land-based shark fishing. You just don't have the sharks; you also have the seas to deal with. Anglers kayak out huge baits, sometimes in dangerously raging surf. Anglers are often dumped from the kayak after getting smashed by a large wave breaking over a sandbar. When lucky, they simply flip the kayak over and reset. For the unfortunate, you might end up pierced by large hooks and a trip to the hospital. When an angler does land a shark, the worst of the encounters usually result in only minor shark rash. It is well known that sharks are often unpredictable and will use their great bulk and teeth in unthinkable ways. Bad accidents, though they can occur, are rare.

In March of 2006 I had an interesting run-in with a sandbar shark at the Port Mansfield jetties. A buddy and I were utilizing the protection of the jetty against the strong south wind. This had been a system we developed and experimented with when all other areas of the beach were blown or weeded out. As expected, we were having action, very good action. We had just landed and released our first couple of sharks in early afternoon and things were getting off to a good start. We were missing hook-ups but the fish were definitely there - and hungry. Then my buddy hooked up on a solid shark. We were very prepared for what we were doing, and were not new to catching and releasing sizable sharks from the jetties. This particular fish came in quick and was landed on a flat, sea level slab of granite. This six-and-a-half-foot sandbar was feisty and rogue swells were rolling the length the jetties to add a hint of danger. We got the fish tagged and made some photos. The shark then spit up a small portion of its stomach (a defensive measure) and had to be dealt with before release.

I was positioned between the shark and the water on the granite. When reaching down to lift the snout with one hand and push the stomach back in via de-hooker with the other, a wave came rolling through. The second this volume of water hit the shark, she responded and curled up, as if trying to maneuver back into the water. At that moment I felt something as the shark swiped its head. I looked down and saw severe lacerations on my hand. Upon further inspection I could see tendons and bone on two of my fingers. Instantly I knew this accident (not an attack) was quite serious. My buddy and l looked at each other wide-eyed and then quickly pushed the shark back into the water "as is" for the release. The trip was over. We knew I had to get to the hospital immediately. Problem was, we were 60 miles down the beach in March, with billowing tides peaking to the dunes. We were in a race against time to save my hand. After nearly a half-hour of gathering gear and getting off the jetty, we hurriedly headed north.

Timing could not have been worse. The drive was extremely slow as my buddy fought rising water lapping against the dunes. In addition, a high volume of seaweed and debris blanketed the beach. Things were very stressful. We stopped after a few miles, within range of the Port Mansfield cellular towers to notify the hospital we were on our way. Then bad luck struck again with vehicle problems, the truck was literally dead in the water with electrical issues. The starter was shorting out and had completely melted the lead off the battery terminal. Thinking to myself this can't be happening, we put our heads together and "MacGyvered" the cables and got the truck started. Nearly three hours later we made it off the beach. My hand was swelling badly and I was trying to remain calm, but it was tough. The entire time, my left hand was wrapped in a white t-shirt. With the blood-stained shirt, it looked more like I was fleeing a crime scene versus a fishing adventure.

At the hospital, X-rays revealed severed tendons on my middle and ring fingers, not to mention numerous other lacerations. Surgery would have to be performed immediately. When I awoke the next morning my hand was wrapped, and sore. With all the uncertainties of what happened, having been put under anesthetic, I was relieved to learn that I did not lose my fingers, nor hand. Recovery was fairly lengthy and included physical therapy but I healed well. Present day, I have very minor evidence that the incident ever occurred. The surgeon preformed a remarkable operation, nearly all the motion of my fingers was restored and I have very little scarring. I was soon back to sharking and my luck in avoiding danger held for nearly ten years. I also want to relate the story of an earth shattering incident that could and probably should have left me dead on the spot. But for that, my friends, you have to wait until next month.