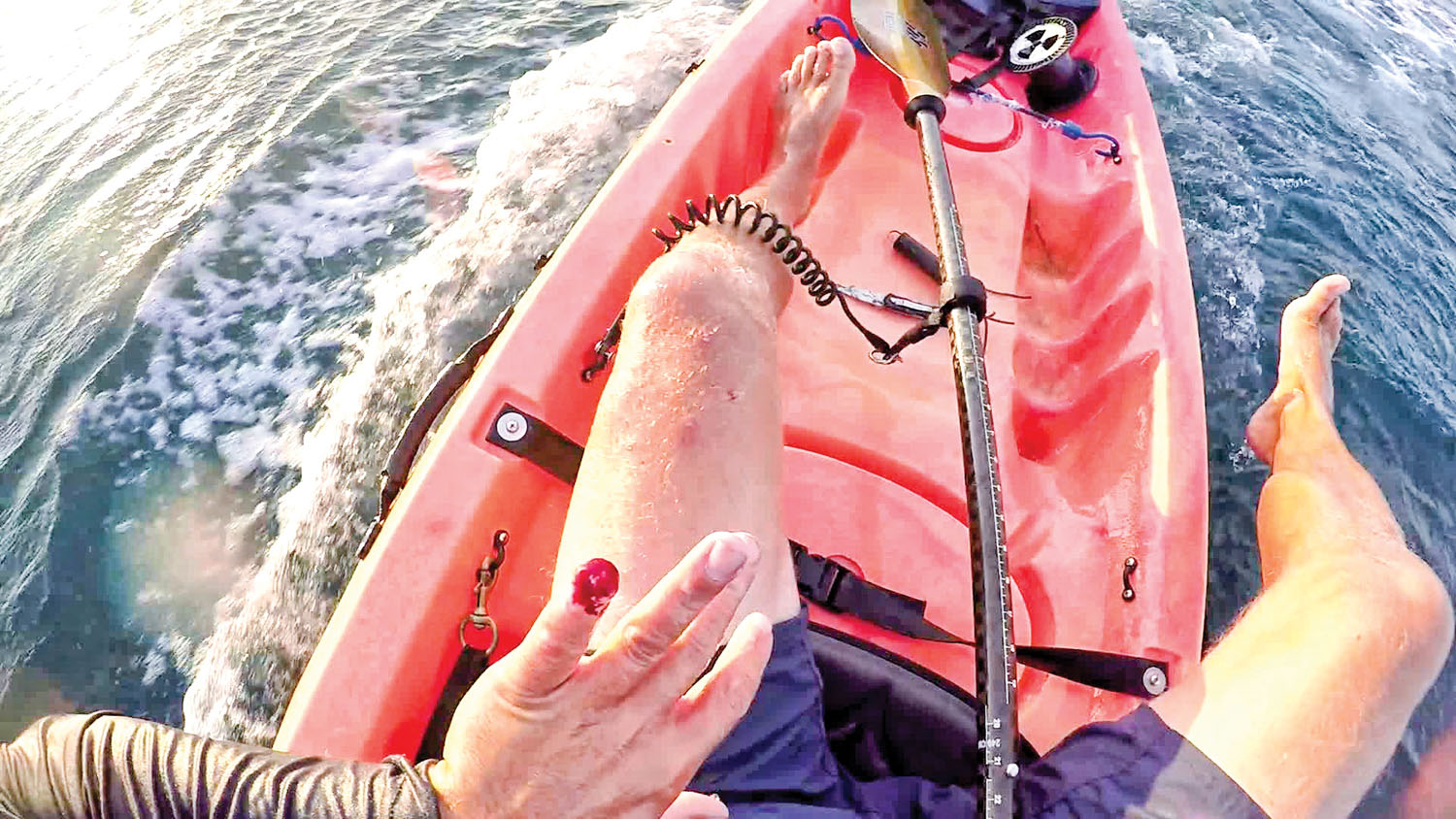 Braided fishing line can cut through flesh and bone!

Last month I shared a tale of the risk associated with the extreme sport of shark fishing. Catch and release land-based shark fishing is not for the weak of heart and certainly not for the weak-minded. Accidents unfortunately can and do happen. The way we prepare ourselves to deal with them, mentally and physically, makes a huge difference in the outcome.

Over the years I have had several accidents and a much greater number of very close calls. Everything from large makos to feisty sandbar sharks and large stingrays in the shallows, I thought I had seen and survived it all. Then one day my lucky streak almost ran out. I was on my ninth life and literally hanging by a thread.

It happened in August 2015, a year that had been giving us phenomenal surf fishing, until a very destructive red tide invaded the PINS surf in the fall, but that's another story. For the first time in many years we escaped the scourge of sargassum. Typically, we would be bombarded with layers of this menacing weed for several months of the year. However, with no seaweed came the ability to fish shark baits hundreds of yards off the beach without issue and the catches were astounding to say the least. Countless hammerheads and monster bull sharks we hadn't seen in quite some time. Tiger sharks also came in respectable numbers during that summer. I was on the beach every possible chance, whether chartered or for myself, not knowing how long the incredible window would last.

During the second week of August 2015, a buddy and I decided to make an overnight big-shark trip. Conditions were eerily as near perfect as you could hope. Normally this time of year the daytime shark feeding is minimal but the monsters come in close to feed at night. The tiger shark is my species and I was hoping for a big one. To put things in perspective, many dedicated shark anglers with years of experience have yet to land one. I have been fortunate to make double-digit landings, each as exhilarating as the first.

As expected on our fateful trip, the daytime activity was slow until right before sunset when we landed and released a pair of blacktips. As darkness approached I swapped out the baits for larger "big shark" offerings. My common big shark setups include a longline float and tether clipped to the shark leader. There are two main reasons I do this. One is to keep track of your baits and spacing to keep lines organized. The other is so that in the event we get cut off we can find and retrieve our gear. All four big baits deployed that evening had floats attached.

The calm conditions continued and the infamous PINS bugs came out to feast. We prepared dinner and crashed early. During the late-night hours one of the lines went slack cut off. This happens due to turtles, sharks, and other large fish swimming into the line. This could also be caused from the line rubbing on shell-covered sandbars all night. It is unfortunate but common in surf shark fishing. The rest of the night passed without incident.

I rose around 0600 and began checking the status of things. The other lines remained untouched, too calm perhaps. The gulf resembled a glassed-over lake providing a perfect reflection of the sky.

With daylight increasing I climbed up on the platform hoping to spot the float I had attached to my missing leader. Surveying the original location with binoculars and finding nothing, I began making broader sweeps with the glasses and spotted it a half-mile offshore and it was moving!

The sun was on the verge of breaking the horizon and I knew I had to act fast to save the tackle. More importantly, I wanted to save the shark from possibly drowning, dragging all that gear.

Grabbing a knife, pliers, and GoPro camera I leapt into the kayak to chase the float. My biggest mistake, which I vow to never make again, was failing to awaken and notify my buddy that I was heading offshore to chase a shark. Having chased many on broke-off gear prior and without incident, I evidently allowed myself to lull into a state of false security. I knew what I was doing, I knew how to conduct and protect myself so I thought.

I set a fast paddling pace trying to keep up with the float. Without a ripple on the water, the sun by now on the horizon was blinding me. Regardless, I continued. Paddling frantically about 15 minutes I began closing on the cruising fish. Slowing to keep pace with the float, I pondered my plan.

My intention was to grab the leader and work the shark close to the kayak. At this point I wanted basically to reclaim my shark leader and float, and in the likely event that this was a large shark, I would simply unshackle the single drop and let it keep the hook. The shark would survive and I would get most of my gear back.

Things were going smoothly as I pulled up the leader and removed the large surf weight. I then collected and untangled a great amount of line so as not to get wrapped up when I released the hook drop. The line had been cut roughly one hundred yards or more from the leader. Much of the line was in a ball with some wrapped around the leader. The rest of the line was trailing behind. Aboard the kayak I cut through dozens of knots and tangles in the 200-lb spectra braid, freeing the mess. Unknown to me, my actions during the next 15 seconds would dictate whether I would live or die.

The large shark surfaced as I was handling the tangled line. No tiger, I was facing a massive and rare dusky shark around the 10-foot mark and several hundred pounds. Continuing to cut line, the shark dove back down, probably in attempt to escape. With the leader in the hand I was using to cut the line, my other hand held the tangled mess already collected. As the shark started swimming off at an alarming speed, I had to drop the leader/float to give it slack. When doing that, I still had line wrapped around my hand which I was trying to dump as well.

As the shark sped off, the braided line compressed and cinched tightly around my fingers. The line was tightening dangerously as I managed to free myself finger by finger. The last few wraps on my pinky could not be freed. The shark was now swimming hard, dragging me in the kayak, by my finger.

With the kayak bobbing violently all I could think about was laying back as flat as possible to avoid being pulled overboard. After what seemed like an eternity, but was probably only a few seconds, I hear a loud pop as the kayak lunged for the last time. Gaining composure, I looked at my hand and the line had completely cut the end of my finger off, through bone and all.

I took a quick last look at the float disappearing offshore, and despite a part of me that wanted to continue the chase I knew I needed immediate medical attention.

I worked my way inshore and finally hit the beach. I wrapped my hand as I related the harrowing tale to my buddy. We organized gear and packed up quickly. The surgeon recommended removing my finger at the knuckle but I opted out in hope of a natural healing. Fortunate to say I have healed quite well.

I became the luckiest person in the world that day and because of it I think twice about getting in the kayak for any reason. Always put safety first, you never know when it may be your last chance!