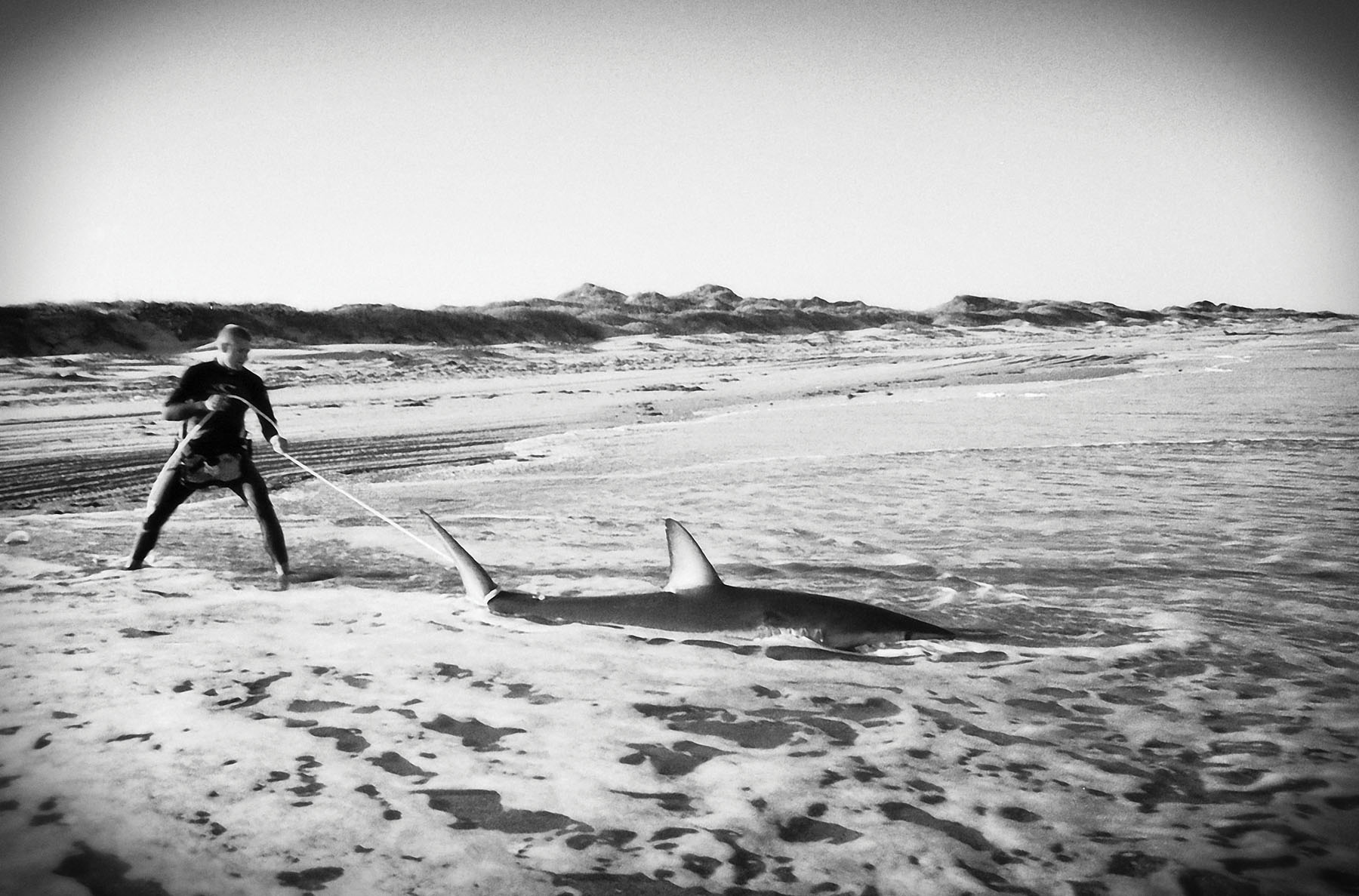 Over the past decade I have been blessed with several monumental catches and, along with those, I have felt honored to grace numerous magazine covers, being written-up in them in them, and various other media. This has become my life and I would not trade it for anything.  I can attribute one very exceptional catch for the initial publicity and boost to notoriety.

It is hard to imagine that an event like such could have an everlasting effect on an individual. On December 7, 2003 - a single fish would change the path and direction my life would ultimately take. Where I am today is a result of a remarkable and perhaps magical surf encounter. We are at the tenth anniversary of the catch that to this day undoubtedly remains one of my all-time favorites.

The year 2003 was a wild one for me. Time management was spent between college (A&M – Corpus Christi), fishing, working, and ditching classes for even more fishing. Despite all, I was thriving with a worthy college GPA. In early fall instead of going back for another semester for respectable education, I was offered an once-in-a-lifetime opportunity to journey out of the country and live and work in the Caribbean. This was a choice I do not regret for my days of hard construction work allowed me to spend my free time on the reefs free diving, fishing, and enjoying the night life. Chasing ‘cuda and tarpon within the mangroves of the Cayman Islands were a little different than tossing lures for trout here, it was an incomparable blast. In Texas I had flounder gigging, there I had behemoth spiny lobster hunts. This truly was an incredible time in my life.

Several months later due to politics and contractor issues within the foreign government, me and a couple close fishing buddies, who today remain some of my best friends, were sent home until things resumed. We essentially had a two week break back in the states and the Padre surf was completely on my mind. There were new fishing techniques I wanted to test. In the Caribbean there were countless lemon and Caribbean reef sharks that prowled the night. There were evenings when we practically hand-fed 8-10’ sharks off the iron shore only to have them dump several hundred yards of line before cutting us off on the drop-off on the opposing side of the reef. We went out on countless nights adjusting our methods until we were finally successful. In the Caribbean, we had to adapt to hazards and obstacles while pursing sharks. I was hoping to utilize some of those secrets off our beaches as well.

I wasn’t home for more than a couple days when good friend and fishing buddy, Scott Nelson, gave me a ring. Scott is a youthful maritime lawyer and is one of the most intelligent individuals I know. A cold front just blew through and the beach was shaping up to offer us a great fishing window. It took little convincing for Scott to get me interested in what would later become an epic trip. I had been dying the months I was gone to get a chance to run shark baits back out from the National Seashore. With a slight nip in the air, I went from snorkeling in 80° water to zipping up in a wetsuit to kayak with water temps now in the 60s. Despite recently living in a tropical paradise, there is just something about our coast that grabs ahold and labels itself home. I was overexcited about the fact that I am finally shark fishing again, on my turf.

We get down the beach and set up camp. There is virtually no one else camping on the park other than another good shark buddy of mine, Chris Sessions. Billy Sandifer was also down day-tripping it, taking advantage of the ideal conditions. The atmosphere seemed different. The land and water appeared desolate yet overpowering during this pristine day. Scott and I deployed several large shark baits. In the early afternoon we finally started to see some action. I hook up and land a 6-1/2’ sandbar shark. These critters are cool-water sharks, mainly residents during the winter along our coast and can max out at over 7’ in length and, at times, showing tremendous girth. Even if this was all that we caught, it would be a successful trip. Little did we know the next fish to pick up a bait would change our lives.

Roughly 3:00pm I was in the truck fixing one of larger shark reels. I heard the clicker go off on one of my 12/0’s and I ran out. At first the line slacked up and I feared I had been cut off. After reeling in all the slack, the line got tight and the fish started peeling drag.  Awesome – fish on!

Then, looking out several hundred yards, we see complete total chaos and thrashing on the surface. We are on to a good fish! This was a “big boy” shark and we were still not sure what to think. Perhaps it was just a mammoth slob of a sandbar—what else could it possibly be? I continued to fight the fish and walked down the barren beach to catch up. After a fair amount of time the shark started swimming straight in. Still not sure what to think, we played it like any ordinary shark.

After a half hour and finally getting the shark over the second sandbar, Scott had the tail-rope in his hands and his game face on. The lunar cycle of the full moon had the tides up as it was, and at that time it was peaking high. Inching the shark closer and closer, anxiety was setting in. We still did not know what species we were dealing with but we were certain it was very solid.

With the rod still strapped to the harness, I walked out on the first bar for leverage and to assist Scott if need be. We finally saw the leader and as the semi-clean swells broke on the first bar, we got our first glimpse of the shark.  At first we saw the head-on profile in the breaking wave and notice a really solid girth. The shark then turned and swam along the sandbar and we both gasped.

The identity of this mystery monster is then evident—a mako!

We maneuvered and walked with it until Scott was able to get the tail-rope on. When he did it went into an aquatic rodeo that nearly ripped his arms out of the sockets.
I laid the rod down and ran over to help Scott secure the fish. Another 60 seconds of one-on-one battle with nature; we finally have the beast landed. Lying on the sand before us displaying a mischievous grin is a shortfin mako – an impressive pelagic species, rare to the shallows.

The healthy female shark tapes out at 9’6” and a weight estimate of 400-500lbs. Despite just admiring the specimen, we worked fast to tag and photo the fish in order to get the release procedure under way. Scott and I strained to get this majestic fish back into the surf. With the aid of the high tide and a few large waves being pushed up on the beach, we got the fish in knee deep water and turned. Without much hesitation, the mako began swimming into the current. We watched as this incredible fish swam on the surface with its erect dorsal exposed until she literally faded far out into sea.

To this day, this remains the only mako tagged and released from the Texas surf, with only two other specimens caught from our beaches on record. After that catch, we just stood in awe talking to each other with a blind look on our faces saying things like, “Did that just really happen?”

The next day when we ventured off the beach we ran into Sandifer and discretely shared the news with him by showing a photo on the digital camera. He too was as ecstatic and could not have been more proud that we released that fish alive. His thoughts were that this was a turning point in shark conservation.

In the days that followed, the internet blew up with the news. At the time, that was the second and largest of only two makos to have ever been caught from the surf. Soon after it seemed like whenever I was down the beach, EVERYONE knew who I was. It was an awkward feeling but the recognition due to something that was achieved in a good manner is something one can live and deal with.

The years following this event put a different mindset in my head. I felt in order to live up to what I had done; I had to continually try to top it. In essence, all the large tiger sharks and other great species I have landed over the past decade were due to motivation from this one mako catch. Truth be told, if I hadn’t caught that fish there would be a very likely chance my life would have resumed island hopping in the Caribbean.  However, because of this one mako catch, I developed an unquenchable thirst for our coastal waters and the sharks that inhabit it.