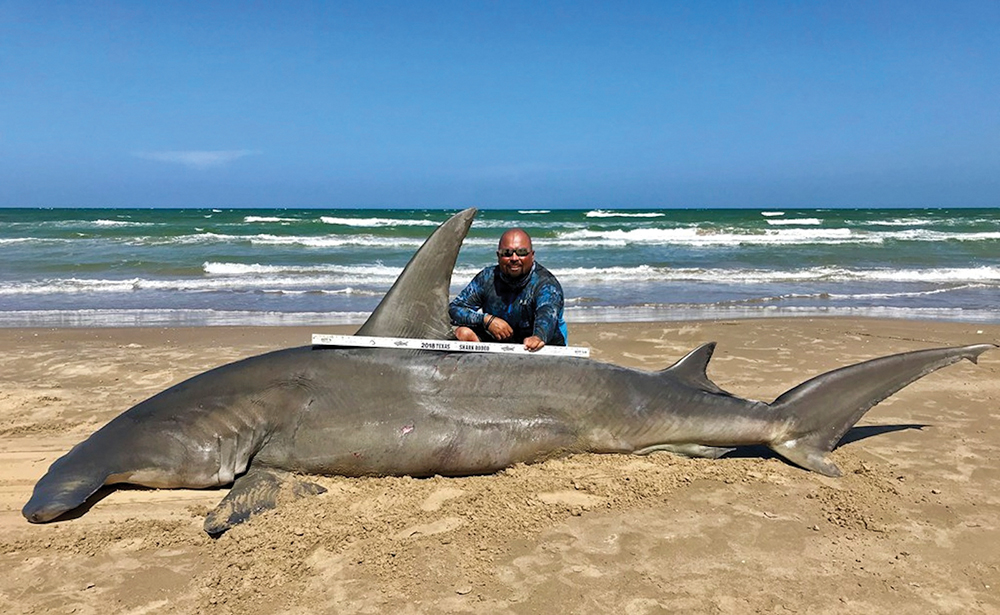 Spring is here and anglers are flocking to the beaches. The warming of the surf zone has attracted swarms of baitfish – mullet, menhaden, anchovies, and shad, the core species of the food chain that supports the host of predators we all seek. Red drum, jackfish, mackerel, and other mid-size predators eat the smaller species, while the sharks come storming in and feed on the larger fish. It is a wonderful time to get on the beach and target sharks.

The 2019 spring season will mark the sixth year for the second and present management regime to present the Texas Shark Rodeo. The Rodeo has a storied history that began roughly fifteen years ago, the brainchild of two individuals – aspiring shark enthusiast, David Williams, and veteran surf angler and world long-casting champion “Big Lou” McEachern.

The original concept of the Rodeo was to create a friendly, competitive environment for shark anglers while compiling and submitting catch data to the scientific community. Anglers would form teams with the goal of catching and logging (in detail) as many sharks as possible – hence the name Shark Rodeo. The nearly year-long event was conducted on the honor system and teams accumulated points toward a championship for their catches.

The initial run of the Shark Rodeo was broadcasted publicly on Williams’ shark fishing website during the early years of the internet, way before Facebook, Instagram, and other venues. It was through the Rodeo web forum that anglers from all across Texas met and became friends on the sand. While some of the participants were veteran shark anglers with lifelong passion for the sport, others were rookies who had landed only a handful of sharks up to that point in their careers. In truth, most specimens submitted were rather small compared to those the present generation of sharkers are bringing to the sand. A series of unfortunate circumstances eventually brought about the demise of the original Texas Shark Rodeo but there was more to come.

Even though it had faded from the scene for a few years, that original run of the Rodeo planted seeds that laid dormant until 2014 when the original organizers and promoters gave their blessing to another generation of sharking enthusiasts and the Texas Shark Rodeo was resurrected. Enter Mr. Curtis Mai and the Sharkathon organization.

At a time when the popularity of Sharkathon and shark fishing on the Texas coast was reaching an all-time high, Curtis Mai and the Sharkathon crew were keen to become involved in providing more shark data for science. They used Sharkathon as a publicity front to promote the rebirth of the Rodeo and the real game changer was partnering with Texas A&M Corpus Christi and the Harte Research Institute. Harte was quick to agree to provide passive research tags to be used in the event and all shark data would be processed back to them for research. In addition, the Rodeo partnered with the Guy Harvey Institute, submitting tissue samples for genetic research.

The Texas Shark Rodeo never charged entry fees to participate and teams could include up to five anglers. There are no cash payouts or valuable prizes awarded to winners – it has always been about friendly competition for bragging rights, with the goal of providing valuable data for shark research. The top anglers and teams would receive small plaques acknowledging their performance and to demonstrate appreciation for their contribution to science. The online submission system made it easy for team captains to submit shark catch data and also provided a handy database for anglers wishing to review their standing among other teams.

The new-era 2014 Texas Shark Rodeo kicked off with a bang. More than 40 teams posted catches and the excitement among competitors reached fever pitch, fueled by social media images of anglers showing off their catches. The highlight of the season was Scott Nelson’s great hammerhead that taped an amazing 13-feet and 3-inches – the largest shark by a Texas beach angler in more than twenty years.

The 2015 Rodeo also included an amazing catch - Steven Kennedy's 13-foot tiger. The 2016 campaign was another for the record book. Not one, but two beastly mako sharks were landed by Rodeo angler, Dwade Hickey, and another by yours truly, Eric Ozolins. Not only were these two sharks the only makos ever recorded in Rodeo competition, they remain the largest mako sharks ever brought to the sand by Texas anglers. But that wasn’t all, that year saw another 13-foot great hammer by yours truly.

The 2017 Rodeo continued to demonstrate the event’s growing popularity and participation as the tally of bigger and badder sharks increased even more. The most important factor was the near total absence of menacing sargassum seaweed that had plagued beach sharkers efforts for nearly two decades, which contributed mightily to the number of large baits anglers could kayak to deeper water beyond the surf. Simply put, more baits produced more large shark landings. Anglers contributed unprecedent amounts of valuable data and the Harte Institute couldn't have been happier.

Finally, the 2018 Rodeo became the grandest of all, a truly record-shattering year in Texas land-based shark fishing. For reasons not completely understood, we witnessed unprecedented numbers of quality sharks and landings of rarer species skyrocketed beyond everybody’s imagination.

Some theorize the horrific red tide outbreaks in Florida pushed greater numbers of sharks toward the western Gulf of Mexico. Whatever the reason, 2018 produced a virtual plethora of large shark landings that included tiger, hammer, bull, dusky, and lemons all being submitted by Rodeo anglers. Not only did the number of landings surpass all previous Shark Rodeos, but the LARGEST shark ever in the event’s history was submitted by Ray Cedillo - a behemoth 14-foot great hammerhead. Three dusky sharks longer than 10-feet were registered along with multiple tigers longer than 12-feet.  Truly a legendary season, the 2018 Rodeo tally rose to 1000 shark landings submitted and 757 sharks tagged.

So naturally, anxiety and hype are quite high for the 2019 Texas Shark Rodeo. The tournament has already kicked off but there is still time for you to register your team and compete throughout the year. I am happy to announce that Catch Sharks is an official sponsor for the event and will be donating shark gear at the end the year for various prizes and awards. In a time in our sport when conservation is the only saving grace, the Rodeo can do no wrong. If you are going to be fishing the surf, anyway, register for the Rodeo so that any shark you may obtain can be passed on to researchers as valuable data for science.

Anyone interested in participating in the Texas Shark Rodeo can visit texassharkrodeo.com to learn more.