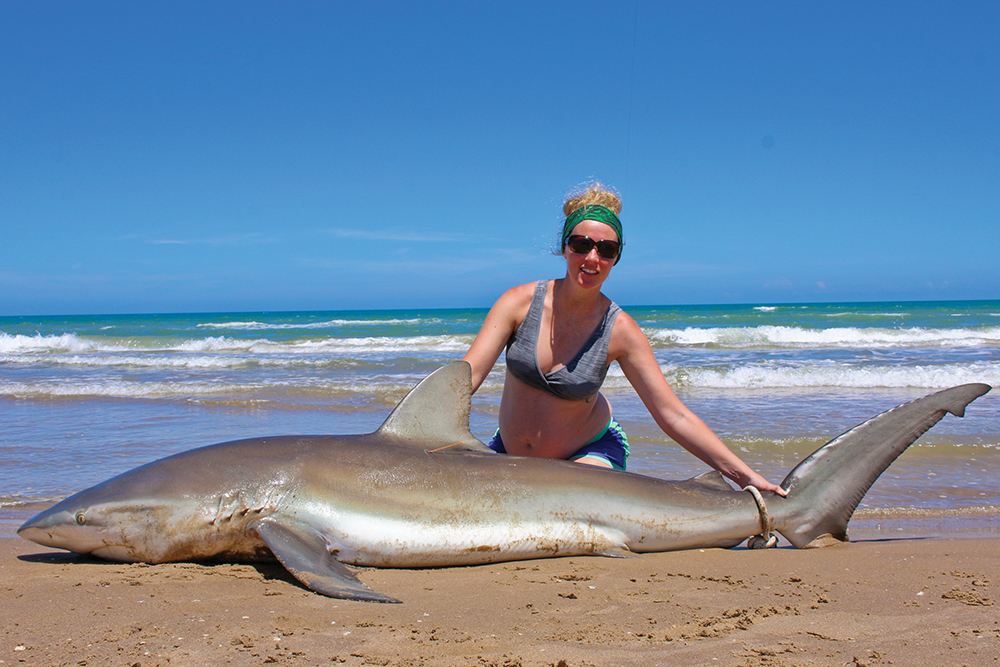 Alexis, my seven-months pregnant better-half with her first-ever dusky shark.

Having spent roughly half my life on the sand of Padre Island, events and developments continue to surprise me. My continuing education includes varying migration patterns, weather anomalies, and other facets that affect marine life in our surf zone. Some are the result of obvious natural occurrences and therefore easily understood while others are a total enigma. Just when you think you have things figured out a curve ball is thrown and theories get shredded. The past eighteen months alone rival everything in history.

The summer of 2018 is the first on record I can remember the waters from the middle to southern reaches of Padre Island being excessively cool in temperature for an extended amount of time. Usually, these cooler-than-average upwelling events arrive and remain a few weeks, never an entire summer. Something as substantial as this surely creates change, right? Did this affect the fishing in certain areas of our precious coast?  You bet!

Being a shark-catching “connoisseur” of sorts, I am always keen to note change, even if I do not always embrace it with open arms. If things are going very well to begin with, why then would anyone welcome change?  For this particular instance, we were enjoying one of the best shark years on record. Then in late-June the waters off the southern half of the Padre Island National Seashore began to change.

Water temps were dropping and, in some places, as much as 10- to 15-degrees cooler than observed just 50 miles north.  Some may think, "Well surely cooler water during the hot summer pleases the fish…right?" In truth, the cooler water is often a deterrent for many predatory species. Reason being - bait species prefer clearer, warmer waters in summer. So yes, fishing success dwindled noticeably.  Meanwhile, with water temps closer to Corpus Christi much warmer, anglers were enjoying abundant shark action. This pattern continued into August. Then came a change to this change, and the combined effect brought one of our rarer shark species to the surf zone.

Aside from the highly-prized and mysterious mako, a species that visits only once in a great while is the dusky shark. Duskys are typically cooler-water sharks that reside farther offshore. They also happen to be one of the larger sharks that visit our surf, often attaining lengths of 10- to 12-feet.  Most sightings of duskys occur far offshore, around shrimpboats culling their catches, vacuuming various bycatch or devouring small sharks whole. Duskys are definitely less-studied than other species and worthy of more research effort.

There have been mature dusky sharks landed from the Texas surf over the years, and while rather rare, they seem to occur during cold-water upwellings in summertime. On average we might see a half-dozen specimens landed over the course of a decade. Any time we get to see one landed from the beach is a real treat.

The reason for these sharks coming close to shore is a mystery within the scientific community, however, I have a personal theory that I stand by steadfastly.

Duskys prefer deeper offshore waters. During offshore shrimp season they get the “beacon” that the boats gathered together are routinely discarding bycatch. Over a period of weeks it is natural for the sharks to congregate and home in on frequent free meals. I believe the sharks stay with the shrimping fleet so long as the handouts are frequent, but soon disperse as the shrimping effort becomes more scattered and/or less productive.

This seems ironically to coincide with the start of the dusky anchovy migration.  Massive concentrations of very small fish form into acre-sized baitballs – millions strong. Several miles offshore at first, then inching closer and closer to the surf zone over a period of weeks. I believe if the water temps are just right, and the bait tracks (or gets trapped) into this cooler water, the duskys will follow. Keeping an eye on these patterns through the month of August I suspected the duskys would eventually appear in the surf – even if just briefly.

The first surf appearance of dusky sharks in 2018 happened mid-August from the South Padre beach – a 9-footer amid cold-water upwellings that been ongoing nearly two months. Shrimpers were only a few miles offshore at night, and baitballs were beginning to move in during the day. With these developments taking shape, would we soon see the dusky sharks arriving north of the Port Mansfield jetties?  Within only a couple of days, two more dusky sharks were landed, this time on the National Seashore.

I knew it was now or never and decided to embark on a shark trip with Alexis – my seven-month pregnant better-half. Loaded with gear and nearly all the shark bait from my freezers, we headed south down the PINS beach. Even if the chance for a dusky or two might be slim I was optimistic.

We set camp in the cool water area at the southern end of the park and several baits were deployed before dark. Action came soon enough with bulls of seven and nine feet but no duskys. I thought it odd, the bulls in the cold water, and begun to speculate whether we’d missed the narrow window of dusky opportunity.

We went to sleep with a couple of baits left soaking when late into the night we hooked into a solid fish. It was running hard like a hammer although hammers are known to avoid cooler water. But, that being said, we had managed a couple of bulls just hours earlier.

I had the shark in range after a hard 20-minute fight and hopped down to wrestle it. Grabbing the leader and dragging it nearer the water’s edge, the spotlights from the rack revealed a dusky and I was overjoyed. The 9’-1" specimen was quite healthy and energetic. Within minutes I had a tag affixed just below the dorsal and sent it on its way.

The wind died the next day and the water became very calm. Surf sharking is known for being exceedingly slow during grease-calm summer days. Around 11:00 AM a rod went off and I crawled up on the truck to battle another very strong swimming dusky that measured roughly eight-and-a-half feet. I managed another successful tag and release and got new baits out.

Another hour passed before another rod went off. Alexis hopped on the rack this time to battle the fish and our third dusky was tagged and released. Awesome!

A couple hours later a large baitball made its way toward shore and it wasn't long until I was hooked into another shark – larger and fighting like a champ. Thirty minutes later I brought it to the first sandbar where in the clear water I could tell it was yet another dusky – a brute of a male that taped 10’-5”. My best-ever dusky and one of the largest I've heard of being landed from the surf. Our fourth dusky and another successful tag and release. Incredible!

We left baits out through the night but the fishing took a slow turn and nothing was touched.

I kayaked out to swap baits at sunrise and almost immediately hooked into a BIG shark on an 80W rig.  The fish was pure power and seemed headed to Florida. I battled as she swam at will, stripping hundreds of yards of line. Getting her turned and finally to the first bar, a process that felt like the whole morning, I climbed down and headed out with the tail rope.

I was amazed at the enormity of the fish as I wrestled it to the shallows for quick tagging and release. A massive female dusky, nearly 11-foot in length. Oh boy!  This was the shark that we came for!

Out of bait, we packed up and headed off the beach with a feeling of great accomplishment. I have always felt a special bond with this incredible species, and the dusky that nearly took my life several summers ago (a tale for another time).

Alexis landed her first-ever dusky and I completed a run of landing my fifth species of specimens longer than 10-feet in length from the surf. An accomplishment I believe unmatched by any Texas angler, possibly one that may never be surpassed. Tiger, hammer, lemon, mako, and now dusky. Rest assured though, I will continue the mission for my sixth species, sometime hopefully in the not-too-distant future.

The ocean is an amazing ecosystem and, despite not always welcoming change, we sometimes reap extraordinary rewards in the midst of it.